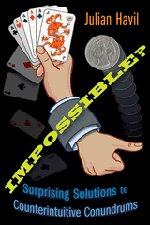 "Marvellous, surprising, crystal-clear, amazing, stimulating, delightful, fascinating" — this is how our reviewer described Nonplussed!, a book published last year by the same author. The same adjectives will do nicely for this sequel, which comes with an equally self-explanatory title. Each of the 18 conundrums presented in this book pitches intuition against mathematics, with mathematics winning the day every time.

Havil picks his eclectic mix of counterintuitive gems from a range of different areas, both in terms of the maths that's behind them and the contexts they arise in. Some spring straight from real life (Can blocking roads ease traffic congestion? What's the chance of catching an elevator on its way up? What do wild cards do for poker?), others are historical maths conundrums that have tripped up many a great mind, and yet others are logical mind games made up by people who like that sort of thing. And while your common sense is quick to point out an answer or insist that there is none, the maths, crisply and irrevocably, leads you straight in the opposite direction.

A good example is a chapter on randomness. Havil uses an attempt by the Communication with Extra Terrestrial Intelligence group to do what its name suggests to illustrate what common sense stubbornly refuses to believe: that randomness isn't the same as patternlessness. When confronted with a sequence of 0s and 1s that sports some sort of repetition, most people will conclude that it couldn't possibly be random. Flipping coins and drawing on arguments of Fermat, Pascal and DeMoivre, Havil shows just how much "pattern" you can expect to find in random data, and this is more than most people would be comfortable with. Incidentally, this failure of common sense reminds of a complaint that was recently lodged against a large manufacturer of MP3 players: the player's random shuffle feature sometimes selects runs of songs by the same artist, leading people to complain that it clearly wasn't random enough!

A chapter on Simpson's paradox also highlights how "meaning" can spontaneously form and then combust as you look at a set of numbers from different angles. A US study from 1854 claimed to show that foreigners were more likely to go insane than natives. The claim was based on the observation that the proportion of insane people among foreigners was higher than that among natives. But now look at the data in another way: subdivide each group, foreigners and natives, into two classes, "paupers" and "independents", and work out the insanity rate separately for each class. The exact same numbers now show that the proportion of insanity, in both classes, is the same for both natives and foreigners. The root of this paradox lies in an innocuous property of humble fractions.

Statistics and probability theory are amongst the strongest contenders for the throne of counterinituitivity, but they aren't the only ones. We are equally stumped when confronted with the very large and the very divisible. A trip to Cantor's paradise explores the strange fact that there are "as many" points in a square as there are in one of its sides, and shows that, when it comes to infinities, your definition of size really does matter. Another chapter revisits an old friend from Nonplussed!, Torricelli's Trumpet, a solid with finite volume yet infinite surface area. The trumpet provides a very cute introduction to something that has tested many a great mind: that infinitely many terms can add up to something finite. And, conversely, that terms that become arbitrarily small can add up to something infinite. The protagonists here are two famous series, the harmonic series and one named after Euler, and Havil examines their respective divergence and convergence from various angles.

Indeed, one of the strengths of this book is its many-faceted approach. Havil presents each conundrum in several guises and most come with a range of solutions. Modern approaches mingle with original arguments, and there's no shortage of anecdotes and historical information. The fact that paradoxes that have taken decades, even centuries, to crack can be presented and "resolved" in a few pages is a tribute to both the power of maths and Havil's knack at presenting difficult problems.

This isn't a book to be read from cover to cover in one go. It's one to dip in and out of, preferably with pen and paper. You'll probably spend more time staring into space trying to get your head around something than you'll spend actually reading the book. Neither is it a "popular" maths book in the wider sense of the word. Havil unashamedly lets the maths do the talking, so a good grounding in A level maths is useful, and for some problems essential.

But this is the beauty of the book. Impossible? presents real maths doing what it does best. If you're happy to run with it, it will take you to impossible places.