The idea that an infinite number of monkeys typing at random on an infinite number of typewriters will eventually produce the complete works of Shakespeare apparently dates from 1913, and has appeared repeatedly in popular culture ever since. When the BBC Horizon team decided to make a programme about infinity, they contacted us about simulating the monkeys. We said we needed a program to churn out random letters and match them to Shakespeare, and so they commissioned a Monkey Simulator program from Aaron Russell, which is available from this website.

The Monkey Simulator program generates random symbols from a list of 31 options: 26 lower-case letters, a space, a comma, a full stop, a semicolon and a hyphen. After a sequence of four symbols has been generated, the program searches for a match in a stored plain-text version of the Complete Works of Shakespeare, ignoring whether a letter is capital or lower-case. If the procedure finds one or more matches, it generates a further character and again checks if there is a match for five symbols, and so on, until no matches are found. Then it starts again with a new sequence of four characters. Characters are generated at a rate of 50 per second. (We note that this procedure cannot match sequences that stretch over the 36,357 line returns in the text file, and also cannot match all the other punctuation in the text, such as the 10,475 question marks and 8,827 exclamation marks.) 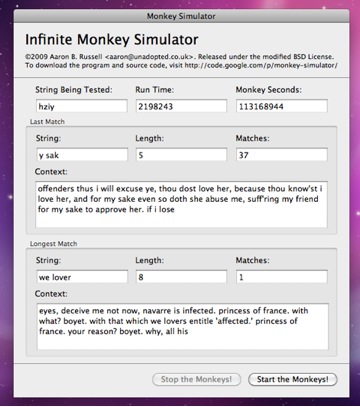 A screenshot from the Monkey Simulator programe

The image to the right shows the situation after the program has generated the sequence "y sak" and matched it with the phrase "and for my sake even so doth she abuse me", which comes from Sonnet 42. In fact, this was only one of 37 matches of this particular sequence in the whole of the Complete Works.

The image shows that after 113 million monkey seconds (or around 26 days for 50 monkeys typing one character a second) the longest match was "we lover", which matched with the speech by Boyet, "With that which we lovers entitle affected", in Love's Labours Lost, Act 2 scene 1.

The claim is that, given enough time, such a program would generate the entire Complete Works. What is the chance of this happening for any particular generated sequence? The sequence would have to start with the first character (the first "T" in "The complete works...") and continue through around 5,000,000 characters (including spaces) until it reaches the end.

Alternatively we can think of the National Lottery, where the chance of winning the jackpot is around 1 in 14,000,000 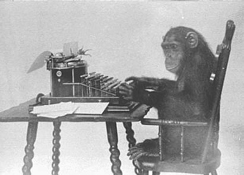 Even though the event of one monkey producing Shakespeare when randomly typing 5,000,000 characters has such a microscopic probability, we are "certain" of it eventually occurring in exactly the same sense that we are "certain" that if we repeatedly flip a fair coin, it will eventually come up heads. This will take on average two flips, just as the time to get the first double-six when throwing two dice is on average 36 throws. So we expect to see Shakespeare after an average of 1/p tries by the monkey, which of course is a very long time. Even with our program, which generates 50 characters a second, corresponding to 50 monkeys typing slowly or one typing incredibly fast, we would not expect to get Shakespeare until well after the Universe has come to an end.

This is an average, but how long might we actually have to wait? Waiting times have what is known as a geometric distribution. If p is the probability of the event of interest, and there are an unlimited number of independent opportunities for that event to occur, then the chance that the event happens at exactly the nth attempt is the chance that it does not happen for (n-1) attempts (that is, (1-p)n-1) times the chance that it finally does happen at the nth try (which is p), to give the total probability as:

As long as p is not zero, this number can be made as small as you like by increasing the number n of attempts. This is essentially a special case of the law of large numbers, which (very) roughly says that things tend to average out in the end. After the Horizon programme was aired I had an email discussion with a philosopher who argued that it was not logically certain that the monkeys would eventually type Shakespeare, which is true, but it is probabilistically certain, which is good enough for me.

We can easily work out how long we expect to wait to have, say, a 99% chance of generating Shakespeare. Suppose we want a chance F of being finished by attempt n. Then F = 1 - (1-p)n, and so rearranging terms we get

where the logarithms can be to any base, but we shall assume natural logarithms to base e. For small p we can get a convenient approximation, since

and so We can express this in an even simpler way. Suppose p = 1/T, that is there is a 1 in T chance of the event occurring. And suppose we want to be really sure of observing the event, so that F = 1 - 1/K where K is large. That is, we want there to be only a 1 in K chance of still being waiting after time n. Then

We can use the exact and approximate formulas to generate the following table for different events:

The number of attempts required to have a specified probability of success when repeatedly trying to observe an event with probability p = 1/T. For small p and F near 100%, n≈T log K.

So to be 99% sure of observing at least one double-six when throwing two dice, you will have to plan to make 163 throws. And to get a particular sequence of 17 characters right, for example "to be or not to b", would require an event with chance 1 in 3117

2.3 × 1025. This is for a particular sequence: there are around five million 17-letter sequences in Shakespeare. So to get any 17-letter sequence right is an event with probability 1 in 4.5 × 1018. Our program types characters at 50 a second, so assuming the program generates a continuous sequence of characters, we would expect to wait around 2.9 billion years, or to be 99% sure, 13.2 billion years — as long as the time since the Big Bang signalled the start of our Universe. 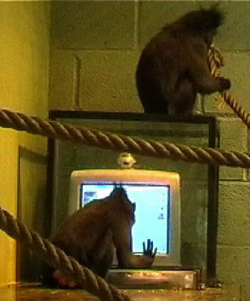 Macaque monkeys at work on their opus Notes Towards the Complete Works of Shakespeare at the Paignton Zoo Environmental Park. Image courtesy of VIVARIA

Theory does not always meet practice. A wonderful arts project in Paignton Zoo put a computer in a monkeys' enclosure to see how they got on. The monkeys typed 5 pages, mainly consisting of the letter "s", and then used the keyboard as a toilet. So rather a limited output of classic English literature, which just shows the problems that turn up when maths meets the real world.

The image of monkeys and typewriters is powerful and will keep on being used whenever we need an image of an apparently impossible event made feasible by thinking on a large enough scale. I think it provides a fine incentive for analysing waiting times for rare events, but does not really give us any insight into what forms of infinity play out in the physical universe. But who cares about that anyway?

Owen Smith is the computer officer for the Understanding uncertainty website, as well as for Plus and all the other parts of the Millennium Mathematics Project. He also occasionally wrangles teams of digital monkeys.

But...what is the statistical probablility of the monkeys banging out five straight pages of s's? :)

Well that depends on whether the monkey is going to approach the keyboard in a random fashion or a biased fashion, as it did toward only one key: s. On its own a string of s's does not possess specified complexity.

Soooo.... There actually ARE infinite monkeys happily typing away... and they were finished in 1616.
They are now happily working on producing "Hamlet II - Not Dead Yet". The leftover work not being of Shakespeare's quality has since been quietly integrated as political guidelines and soon to come patent applications... (http://www.epo.org/topics/news/2010/20101130.html)

That would explain sooo much.