Plus first met Emily Dixon four years ago when she was still at school and spent four weeks doing work experience with us. She is now in the third year of a maths degree at Oxford, and we decided to find out how she's getting on. 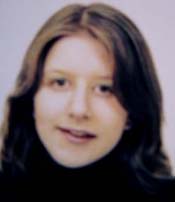 Like many British students, Emily had to start making decisions about her career quite early - at age 16, when she finished her GCSEs. "When it came to choosing A Levels I wasn't quite sure which route I wanted to take. I knew I definitely wanted to do maths, just because it was a subject I was good at, and it interested me more than most subjects. I wanted to do sciences because they interested me and I'm not a big essay-writer, so I did physics and chemistry. I wasn't sure about doing further maths but my teacher managed to convince me it wasn't a huge amount more work.

"Other options I considered were computing and physics, but I didn't like the idea of spending time in the lab. It was always more theoretical for me. I could go on to other things more easily from maths than I could go on to maths from other things. And it was what interested me."

And, fortunately for Emily, it was an interest which was nurtured and challenged. "My teacher was very good at encouraging me to go beyond the scope of the syllabus - books to read and booklets to work through and things like that - and we went to lectures in London and at the University of Cambridge. So I knew there was more to maths than I had done at school. You only get a very small glimpse of what maths is about at school. It changes dramatically when you get to university."

But as Emily points out, choosing a university is not an easy matter. "You never quite know what it's going to be like until you get there. You can go to Open Days, but they're putting on a show and you're not living the life." As a bright student with high projected grades, Emily was advised to consider Oxford or Cambridge. Having lived in Cambridge all her life, she felt she would not consider going to university there. "Growing up in Cambridge and having a father who worked there means it's sort of assumed that's what you'll do. But I'd lived there all my life and I wanted a change and I didn't want my parents checking up on me every five seconds!"

She considered various universities, all of which seemed to her to be really good in their own way, but in the end she set her sights on Oxford, choosing to apply to St John's College for no other reason than that someone from her school was there and enjoying it. For Oxford, not only are offers conditional on achieving extremely high A level grades, but applicants are usually expected to do well in a separate exam, the "Common Test", and come for interviews at their chosen colleges. In Emily's case, she needed to achieve three A grades out of four, two of which had to be in maths and further maths.

But as it turned out, getting the grades was the least of Emily's worries. "The interview at St John's was a disaster, I didn't get any questions right without considerable help from them. I just sat there thinking 'help me please!'. The worst point was when they asked me a question to which the answer was an inequality, which I wrote down and then I tried to read it out. And every time I tried to read it out I read the inequality the wrong way. I'd written it the right way, but I just couldn't say it! I'd interviewed at other colleges and they were much better, so I thought I might have had a chance of getting into one of those."

Fortunately, however, St John's decided they liked Emily despite her inequalities and she was duly offered a place. "I'm actually the only girl at my college doing maths in my year. This is no way a college policy - just the way it turned out in my year, there are more girls in the other years. Is this a problem? "Not at all - the guys are quite useful. They laugh at me for being so worried about everything, though. Women aren't always expected to do brilliantly in maths so if I do well, that's great. Women are still underrepresented in maths, but that is slowly changing."

A shock to the system

Like many new students, Emily found her first term at university something of a shock to the system. "A level maths was the sort of maths I could do; it didn't take too much hard work. And some lecture courses start where A level left off - not even where further maths left off as they don't assume everyone's done further maths because not everyone has that option. But you do what took you two weeks at A level in one lecture maybe, or even less. And a few other things, like Analysis, were a bit more like being thrown in at the deep end, nothing like you'd done before."

And it isn't just the subject matter that is different from A level, but also the whole approach to teaching and studying. "Suddenly I had to come to terms with the concept of lectures and structuring my own work schedule and doing my tutorial sheets and being a lot more pernickety about maths - having to prove that 1 is greater than 0 and things like that! You find that you're not supposed to get every problem on your problem sheet right. The first time I was thinking: 'I haven't done everything right. I don't know what to do, the tutor's going to kill me!' But they're there to help you through it. If you got everything right then there'd be no point. There are some people who can just look at a problem sheet and do it. I am not one of those people! But with enough work, it generally makes sense." 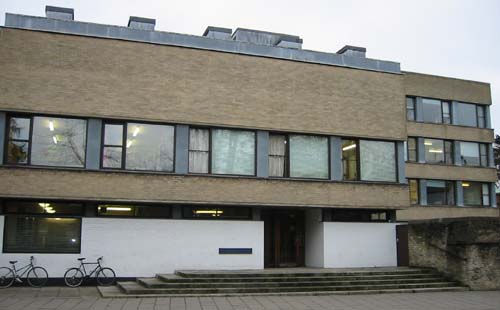 The Mathematical Institute, University of Oxford

The first term of Emily's second year was also prescribed, with courses on Linear Algebra, Differential Equations and Complex Numbers. She was then able to choose between courses in pure, non-physical applied and physical applied mathematics. "It would be possible", she explains, "to keep up all three areas, but that would really hinder you later on because you wouldn't have the depth to specialise. So you really need to give up at least one of those areas. I decided to give up Physical Applied. I was still doing Statistics, Algebra, Analysis and Logic but I had to give up the entire physical aspect of maths, which is quite a lot to do quite early on, as you can't easily go back. You've just written off an entire avenue, which was quite hard at the time."

Unlike many undergraduates, Emily has known all along that she will study for four years, rather than three. This was a deliberate choice on her part as Oxford offer the choice to do either. "You don't have to do a fourth year. Three will give you a B.A.; the fourth year gives you M.Math. For the three-year course you have to do a paper in something outside maths and for the four-year you really just do maths. You apply originally with one or other in mind, but they don't take this as set until your second year."

But the classroom and the lecture theatre are not the only places to nurture an interest in mathematics and anyone hoping to continue using mathematics after university would be well-advised to get some experience in the workplace. It is a good opportunity to get a better understanding of the career you intend to pursue and, perhaps more importantly, an excellent way to make useful contacts. In Emily's case, this experience began at school during her lower sixth year. "My teacher suggested I do the Nuffield bursary scheme, and maybe do that in maths. They didn't generally do projects in maths and weren't sure I'd be able to get anything, but luckily the Millennium Mathematics Project [of which Plus is a part] came through with something for me.

"I spent four weeks at the MMP writing an article for Plus on check digits in error codes and had great fun. It was something I would never have done within my school syllabus and was really interesting. It is a good application of maths - one we all use every day countless times without realising it. When you're just doing differentiation, integration, and things you begin to wonder how on earth you're ever going to use maths in the real world. I liked the more abstract stuff too but it was nice knowing that it was a very useful subject."

Between Emily's first and second and second and third years at university she worked for a software company in North London called Data Connection. "I heard of them through a Careers Fair in Oxford. I was working in the Network Protocols Group, doing all sort of things that meant nothing to me before I started (like adding random delay to IP packets) - luckily you learn quickly when immersed in the environment, and they teach you everything you need to know."

Emily spent eight weeks each year with Data Connection, finding the work challenging and the experience enjoyable. "They have a lot of vacation students and they have company houses that you all live in. So we had the student life, but the weekends off. And you're finished at whatever time you decide to finish. There were 20 of us in my first year. It's not that big a company, but they believe very strongly in recruiting this way. They know how well you're going to work then. It tells them a lot more about how useful you'll be to the company than just an interview.

"I have also done some teaching in Oxford. It was for a project called Learning Together, and basically I volunteered to go in and help in a local state school. In my case it was a GCSE class. There were two tiers and one teacher had to teach them all, even though they were doing totally different stuff. I would work with one group while she would work with the other group. It was a great experience. One guy didn't know how to multiply out brackets and I showed him and he got it. They'd been doing it for a few months and he was saying, 'I'm sure it's not that hard, I just don't get it'. And then afterwards, 'great, that makes sense'".

But as for a future career, Emily is still undecided. "I just can't see myself being a teacher fulltime. I think I'd find it very frustrating, because you don't get to help each student as much as you'd like.

"And there are so many things you can do with maths. If I had done an medical degree I'd feel that I should be a medic; if I've got a maths degree, I can be pretty much anything - other than a medic!" But not, she admits, a research mathematician. "I don't think I'm good enough, I think my tutor would laugh! I think a Masters degree is as far as my maths is capable of taking me."

This interview was conducted by Helen Joyce, the editor of Plus, with additional research and writing by Andrew Stickland.