In the previous article, John Conway lead us through the early days of quantum physics and explained why the non-predictive nature of this theory worried some physicists, in particular, Albert Einstein. Einstein believed that physical properties, such as the position and momentum of quantum particles, have definite, fixed values whether those properties have been measured or not. In 1935 Einstein, along with colleagues Podolsky and Rosen, came up with the EPR Paradox, an ingenious thought experiment that seemed to show that quantum physics contradicted special relativity. In this article we'll jump forward 30 years, and explore a development that not only seemed to explain the EPR Paradox, it also provided the first hint of Conway and Kochen's Free Will Theorem.

You can think of quantum particles as if they are spinning around on an axis, and their spin as the angular momentum of the particle. (The particles aren't actually spinning, spin is an inherent property of the particle, but it can be helpful to picture it this way.) If the particle is spinning clockwise around a vertical axis, its quantum spin points down, and if it spins the other way the spin points up. As well as a direction (up or down its spin axis) the spin also has a value. But being quantum it’s all quantised – the spin can only take one of a small number of particular values.

The elementary particles have either spin 1 (eg, photons) or spin 1/2 (eg, electrons). These, and their composite particle relatives, are represented in the work Spin Family (2009) by Julian Voss-Andreae, (photo: Dan Kvitka)

Conway assures us it’s not vital to understand exactly what quantum spin is to follow the story of the Free Will Theorem. “You don’t have to understand what a spin 1 particle is, or which particles in the zoo have spin 1, or spin 1/2 and so on. You just need to know that there are these spin 1 particles and they have an important property.”

Then quantum mechanics predicts a deceptively straightforward result: If you measure the squared spin of a spin 1 particle in three perpendicular directions, you will always get the answers 1, 0, 1 in some order. “That’s a fantastic fact, absolutely amazing. We call that the SPIN axiom, or the 101 property.”

You don’t have to believe quantum mechanics to believe this axiom is true; the 101 property can be experimentally verified. You could go to a lab yourself and do the measurements zillions of times until you are satisfied. “It might be 011, or 110. But if you measure the squared spin of a spin 1 particle from three perpendicular directions you always get two 1s and a 0,” says Conway. Conway and Kochen took this SPIN axiom as the first axiom in their Free Will Theorem.

In 1967 Simon Kochen and Ernst Specker showed that this 101 property, which seems quite straightforward at first, has a surprising consequence. “This experiment is called measuring the squared component of spin of the particle in a given direction: but that’s nonsense,” says Conway. Kochen and Specker were able to prove that the squared spin in any direction of a spin 1 particle is not fixed until it is measured. “The language suggests that the particle already knows what it’s going to tell you… but the Kochen Specker argument show’s that it’s nonsense.”

Kochen and Specker proposed a thought experiment where they assumed that Einstein's instinct was right: a spin 1 particle has definite, fixed values for its squared spin in every direction.

Then imagine your spin 1 particle is sitting at the centre of a box, with the box’s faces marked with dots as for a die. “Let’s not actually do the experiment,” says Conway. “Let’s assume the particle is our friend, and we’re not going to disturb them at all. But if I were to ask it, the particle would tell me: for this direction [the squared spin is] 1, for this direction 0.” 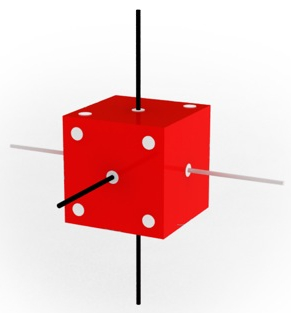 These directions are just a few of the infinitely many directions in which you could measure the squared spin of the particle, and the 101 property must hold for any three perpendicular directions. Kochen and Specker’s ingenious argument was to consider the squared spin in just a handful of directions: 33 in all. (You can see all the details in our pictorial version of the full proof.) 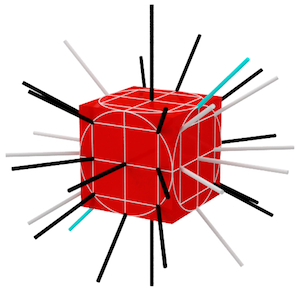 The simplese proof of the Kochen-Specker Theorem considers just 33 directions. If you assume that the squared spin of the particle has a definite value in each of these directions, you end up with a contradiction: the squared spin in one direction ends up being both 0 and 1 (indicated by the blue needle).

“If the answers were chosen ahead of time you could stick a knitting needle through each of these directions,” says Conway. “Thirty-three knitting needles: a black needle if the predetermined answer was 1 and white if the answer was 0. But [Kochen and Specker showed that] it is impossible to label all these directions with 1’s and 0’s so that they all satisfy the 101 rule; you get to a point when you need both a black and white needle.” (This contradiction, the point where you need both a black and white needle, is illustrated in the image with a blue needle.)

With this Kochen and Specker had disproved one of Einstein’s assumptions in the EPR Paradox; quantum particles not only do not have fixed definite values of squared spin before they are measured, they cannot have fixed predetermined values for every possible direction. “The fundamental reason why these things aren’t predetermined,” says Conway, ”is that no consistent set of answers exists.”

“This reminds me of when I was a little boy and I played Twenty Questions with my two sisters,” says Conway. Many of us have played this game. You decide on an object and say whether you’re thinking of an animal, vegetable or mineral. Then the other players ask you questions that have only two possible answers: yes or no.

“But I used to do the following. If I sensed somehow that my two sisters were getting too close to my object I would choose a new object! But you have to be quite clever to do that because you have given answers that applied to your old object. (By the way, the penalty of being caught out was to have your earlobes bitten! My god it hurts like hell! I can still remember it 65 years later!) You have to find a new object that gave those various answers too.

Conway says that he now recognises the first hints of his Free Will Theorem in Kochen and Specker’s 1967 result: “This proves something which in itself is a first approximation to the Free Will Theorem,” says Conway. The value that you are trying to measure, in this case the squared spin of a particle in a particular direction, can’t exist before you conduct the experiment. Instead the behaviour of the particle, as measured by the value of its squared spin in a particular direction, is decided “on the fly”.

But Conway said he and Kochen were not actually thinking about free will at all when they were working together. “We didn’t know we were going to say anything about free will. We were just trying to understand this Kochen Specker thing and its interaction with the EPR Paradox.” But as we shall see in the next article, they stumbled upon a result that could have deep philosophical consequences for quantum mechanics, and our world view in general.

Next: Conway and Kochen's Free Will Theorem...