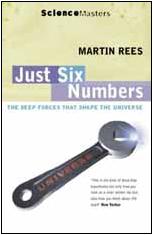 Just Six Numbers: The Deep Forces That Shape the Universe

It seems amazing that the universe could be characterised by a mere six numbers, yet, according to Astronomer Royal Martin Rees, this is the case. He makes an excellent case for the necessity of these numbers, though he does not show that they are the only numbers we need.

This is very much a book on cosmology, the formation of the universe. You are dropped into the current standard model of cosmology, learning what the experts know, but without needing any prior knowledge or seeing any equations. Everything is clearly explained, and some historical background is given where it is useful or entertaining. Each of the numbers is described fully, and the implications if it had a different value make surprising reading. It would seem that in order for you and me to exist, so must the rest of the universe as it is today. If life is to appear on Earth, other planets, stars, galaxies and more, must also be present.

Just six numbers, however, is an understatement. The story describes these six numbers thoroughly, but to do so, it is necessary to introduce many more numbers. In particular, we are asked to imagine zooming in and out by factors of ten, to get an idea of the scale of the universe we inhabit. Different values of the numbers are suggested, and then eliminated as impossible or unlikely from the evidence around us. In the first half of the book, there would seem to be a number in nearly every sentence, though this drops off in later chapters. Experts may find this explaining of the scale of things tedious, but for the rest of us it is useful to understand the overwhelmingly large and small numbers that let us exist.

So what are the six numbers? One is the number of dimensions we live in: three. The rest are, at least at first sight, more obscure. For the record, they are N, the ratio of the strength of gravity to that of electromagnetism;

(epsilon), the ratio of mass lost to energy when hydrogen is fused to form helium;

(lambda), the cosmological constant; and Q, related to the scale at which the universe looks smooth. Martin Rees takes 180 pages to explain them - I can do no better here.

In "Just Six Numbers" Martin Rees writes: "All physical theories involve equations and formulae that render the technicalities (though not, fortunately, the key ideas) opaque to the non-specialist." He has succeeded in describing the key ideas in cosmology, as we understand it today, without using the equations and formulae that prevent the non-specialist from understanding the technicalities.