From kaleidoscopes to soccer balls

The worlds of mathematics and art lost a great mind when Donald Coxeter, said to be the greatest classical geometer of his generation, died on 31 March 2003 in Toronto, Canada, aged 96.

Coxeter was fascinated by mathematics and art from a young age. He excelled at music, composing an opera when he was just 12, but was diverted from a career in composition to one in mathematics by his appreciation of the beauty of symmetry. He studied at the University of Cambridge and continued there as a research fellow until moving to Canada in 1936 to work at the University of Toronto, where he remained an active member of the mathematics department for 67 years.

Throughout his mathematical research, Coxeter continued to be inspired by his artistic side. Robert Moody, when proposing Coxeter for an honorary degree from York University in Toronto, said: "He is guided, I think, almost completely by a profound sense of what is beautiful."

Many areas of Coxeter's work involved the study of symmetry. Perhaps his best-known legacy is his work on the mathematics of kaleidoscopes, including those operating in higher dimensions. He described the Coxeter groups as "the algebraic expression of how many images of an object may be seen in a kaleidoscope".

One of Coxeter's books, Regular Polytopes, deals with the regular polyhedra (objects whose faces are identical regular polygons, such as a cube) and their higher-dimensional counterparts (after which the book is named). This area of mathematics has some surprising applications. For example, most of us are familiar with the truncated icosahedron - it is the shape of a soccer ball, with its pentagonal and hexagonal faces. It is also the shape that inspired Buckminster Fuller's geodesic domes, and it played an important part in the discovery of Carbon 60, known as buckyballs.

Coxeter's work also influenced art, particularly through his friendship with the artist Maurits Escher, whose Circle Limit series was based on non-Euclidean Geometry. However, Escher was not a mathematician, and it was only from the diagrams in Coxeter's papers that he eventually came to understand these strange geometries. 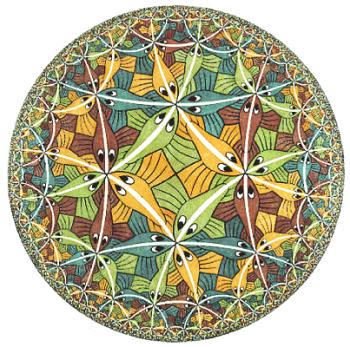 This series of works was created by eye, using only simple drawing tools to develop the tessellating patterns distorting towards the edge of the circle as they go off to infinity. Coxeter showed that, despite this, Escher had achieved mathematical perfection in his work Circle Limit III. The arcs forming the backbones of the fish intersect repeatedly at the correct angle throughout the image, even at its warped edge. In a paper published in 1996, Coxeter showed that to construct the picture mathematically would require a complex trigonometric calculation involving the cosine of angles and the hyperbolic sine of a logarithmic function. "I did it by trigonometry," he said. "Escher did it by instinct". (You can read more at the University of Toronto website.)

Coxeter continued to produce mathematics throughout his life, and had finished a new paper just before his death at 96. He felt his long and successful life was due to his vegetarian diet, doing 50 press-ups a day and working in an area he loved: "I am extremely fortunate for being paid for what I would have done anyway."