Knowing when to quit

Knowing when to quit is one of life's great dilemmas, whether to persist in the face of diminishing rewards, or to quit now in the hope of finding richer rewards further afield. For every gold mine, eventually there comes a point when the amount of gold extracted can no longer justify the cost of keeping the mine open; once that point has been reached, it is time to quit, and start looking for a new mine.

Similarly, for a bird feeding on caterpillars in a bush, there comes a point when the calories gained can no longer justify the energy expended in searching for more caterpillars; once that point has been reached, it is time to quit, and move to another bush. And, for a honeybee, there comes a time when the weight of pollen collected can no longer justify the energy required to carry that pollen; at that point it is time to quit collecting, and fly back to the hive. 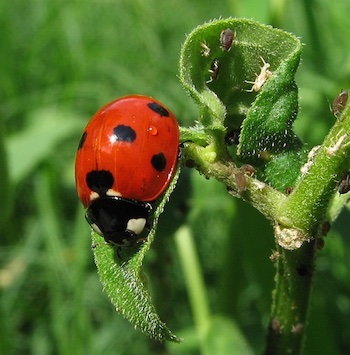 She doesn't have far to look for her next meal (Image Greyson Orlando – CC BY-SA 3.0)

Ladybirds on the hunt

Ladybirds feed on aphids, but watching a ladybird eating an aphid is like watching a human eating a lobster, because the aphid's exoskeleton is as impenetrable to a ladybird as the lobster's exoskeleton is to a human. In both cases, after an initial flurry of activity during which the juiciest parts are eaten, increasing amounts of effort are required to extract decreasing amounts of food. The dilemma faced by the human is knowing when to quit and move on to another dish. Similarly the dilemma faced by the ladybird is knowing when to quit, and go in search of another aphid.

If the ladybird quits feeding on an aphid too soon then she wastes food that is easily accessible. Alternatively, if she quits too late then increasing amounts of effort are required to obtain diminishing amounts of food, which might otherwise be obtained easily by finding another aphid. Clearly, there is an optimal "Goldilocks time" to quit; a time that is neither too soon nor too late. To work out when this Goldilocks time has arrived, we need to examine the eating behaviour of ladybirds in more detail.

The lobster-like nature of aphid anatomy means that, if a ladybird is left alone to feed on an aphid then the cumulative weight of food eaten increases with feeding time

in a manner shown by the data points below. (The data is from a classic paper on optimal foraging theory by RM Cook and BJ Cockrell published in 1978, which inspired our ladybird example.) 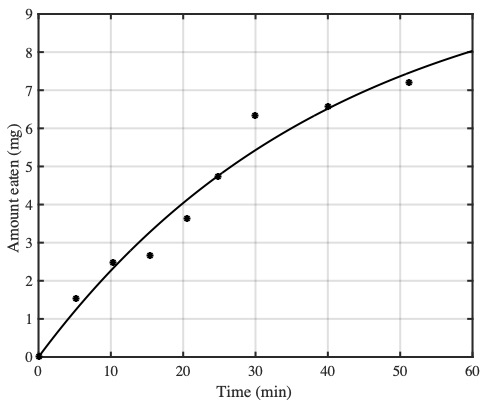 The weight of tissue eaten (black dots) from an aphid in t minutes, fitted with a reward function, E(t) (black curve).

These data points can be fitted with with a reward function

, described by the curve

for our ladybird example. We can use this reward function to define two key quantities:

These quantities have reasonably intuitive geometric interpretations. The figures below use the reward function fitted to the ladybird data above, to show the accumulated amount of reward

after a food source is found in time 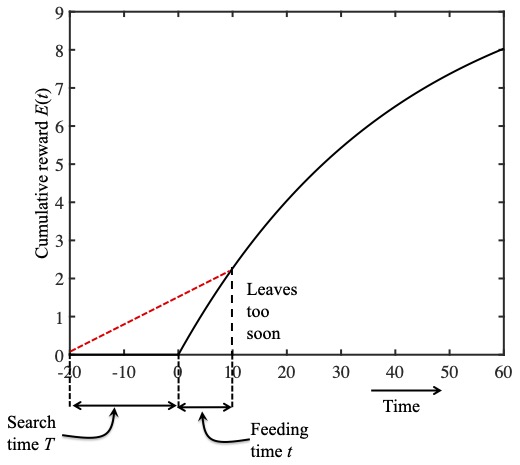 The black curve in these figures is the reward function E(t) and the slope of this curve is the instantaneous reward rate r(t). The slope of the dashed red line is the average reward rate R(t). In this figure the ladybird leaves too soon.

after the aphid is found, we can define a right-angled triangle with a base of length

(the dashed black vertical line). The third side of this right-angled triangle is the red dashed red line, and the slope of this line is equal to

. This means we can express the problem of maximising the running average reward rate in terms of the slope of the red dashed line. Specifically, which red dashed line has the largest possible slope?

In the top figure to the right, a feeding time of 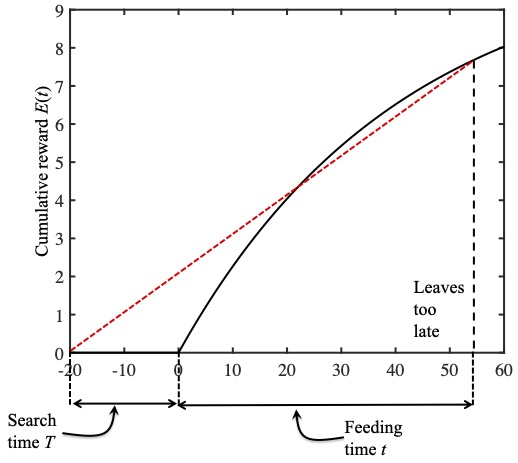 In this middle figure the ladybird leaves to late.

Similarly, in the figure in the middle , a feeding time of 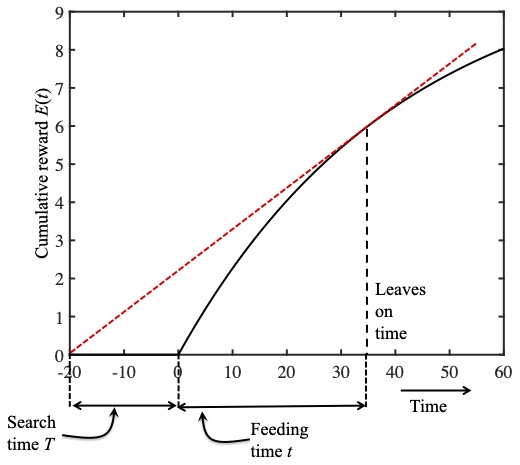 In this figure the ladybird leaves at just the right time.

Finally, in bottom figure, a feeding time of

minutes yields a the largest possible slope; this is the optimal time to feed as her running average reward rate would be maximal if she were to quit feeding after 35 minutes.

of the reward function exactly matches the slope of the red dashed line, which is equal to the running average reward rate

. In other words, the Goldilocks feeding time occurs after feeding for a time

As a geometric confirmation, the instantaneous reward rate

is plotted as a red dashed curve in the figure below, and the average running reward rate

is plotted as a black solid curve. 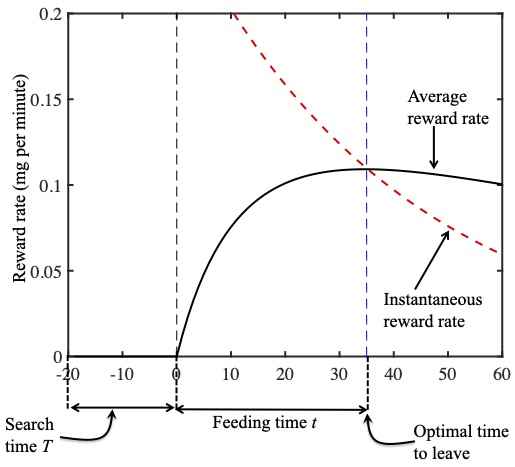 As we should now expect, these two curves cross at the Goldilocks quitting time (i.e. where

). This geometric analysis has effectively proved the marginal value theorem, which states that the optimal time to quit is when the instantaneous reward rate equals the running average reward rate; that is, when

. (You can see a mathematical proof of the marginal value theorem here.)

The above analysis assumed a constant search time

. But a proper test of the predictions of the marginal value theorem would also involve varying search times. In essence, long search times suggest food is scarce, so it makes sense to increase the time spent feeding on each aphid accordingly. In other words, the amount of time spent feeding on a particular aphid should increase with the time taken to find that aphid. However, beyond this correct but vague conclusion, the marginal value theorem predicts precisely how much feeding time should increase with search time, as shown in the figure below (again using the reward function based on data from Cook and Cockrell’s experiments in 1978). 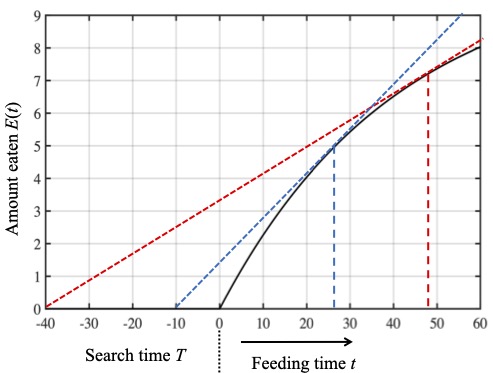 The question is, do ladybirds quit in accordance with the predictions of the marginal value theorem? To answer this question, Cook and Cockrell scattered aphids around at random on a tray, and then measured the time

taken for ladybird larvae to find each aphid, and the time

spent feeding on each aphid. (Cook and Cockrell used ladybird larvae rather than ladybirds, but that does not matter here). 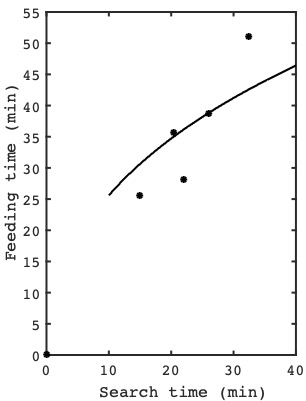 How the average feeding time of the ladybird larvae varies with the search time required to find an aphid: the dots represent observations from experiments and the black curve is the feeding times predicted by the marginal value theorem.

In this particular example, the fit between the data and theory is not impressive. This may be because the running average reward rate function

does not have a sharp peak, so the efficiency penalty for quitting a little early or late is relatively small. In contrast, if the reward function rises more steeply then the running average reward rate has a higher peak and it’s more likely that the experimental data would be a closer match to the predictions of the marginal value theorem.

Animals know when to quit

The way that ladybirds hunt for aphids is just one of many examples of how animals maximise food intake by quitting at just the right time. But the same lessons can be applied to any situation in which acquiring a valuable resource is costly.

The great minds of great tits 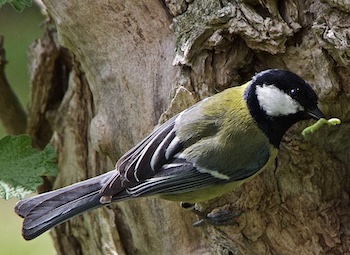 Notice that the time taken to find a new female corresponds to the time required to find a new food source (a new aphid or a new bush) in the previous examples, and that the time spent mating with one female corresponds to an increasing, but diminishing, reward. Accordingly, we should not be surprised to learn that the marginal value theorem predicts just how long a male dungfly should mate with each female to ensure that he has as many offspring from as many females as possible. In 1976, the scientists G.A. Parker and R. A. Stuart observed that male dungflies spend an average of 36 minutes mating with each female, which is comparable to 41 minutes predicted by the marginal value theorem.

Are bees too busy to be efficient? 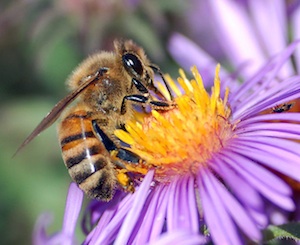 As a honeybee collects more pollen, the amount of energy expended carrying the pollen back to the hive increases. The dilemma faced by every honeybee is this: At what point should the honeybee quit collecting pollen and return to the hive?

At one extreme, if the honeybee returns after collecting a single grain of pollen then the energy used in flying to and from the hive almost certainly exceeds the energy obtained from the pollen grain. At the other extreme, if the honeybee collects a large load of pollen then the rate at which pollen is collected will be large, but the energy expended in flying back to the hive could be a substantial proportion of the energy obtained from the pollen. Between these two extremes is a Goldilocks load size which provides the maximum possible pollen energy gained for each calorie expended in flying. Notice that there are diminishing returns because the honeybee's load increases with each successive flower visited.

Using a range of distances between the hive and flowers, the scientists Paul Schmid-Hempel, Alejandro Kacelnik and Alasdair Houston observed in experiments in 1985 that the pollen loads carried by honeybees matched those predicted by the marginal value theorem. In short, honeybees collect pollen as efficiently as possible in terms of the energy expended per gram of pollen collected. In contrast, a model based on maximising the rate at which pollen was collected per minute yielded a very poor fit to the pollen loads, suggesting that honeybees favour energy efficiency over the rate of pollen collection.

Brains and the marginal value theorem

Neurons process information, and that is pretty much all they do. But neurons are extremely expensive to maintain, and even more expensive to use to transmit information, so it makes sense that they should run at maximum efficiency. 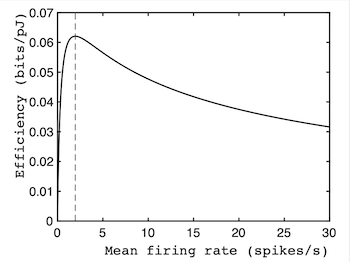 Consequently, the marginal value theorem can be re-cast in terms of energy expended (which replaces time) and information (which acts as the reward). The resultant efficiency curve shows that the maximum efficiency (measured in bits/Joule) predicted by the marginal value theorem occurs at a firing rate of about 2 neuronal spikes per second. Crucially, in 1996 the scientists William Levy and Robert Baxter found that this prediction agrees with their observations of the average of firing rate of neurons.

Thus, the marginal value theorem specifies how much to pay to maximise rewards, whether payment is measured in time spent searching for aphids or energy expended in neuronal spikes, and whether reward is measured in aphids eaten per hour, or bits of information processed per Joule.

If you'd like to see a mathematical proof of the marginal value theorem, you'll find it in this appendix. You can read more about optimality principles applied to animals in Optima for animals by R. McNeill Alexander, and more about optimality principles applied to brains in Principles of Neural Information Theory by James V. Stone, the author of this article. And you can read about Claude Shannon's theory of information in the Plus article Information is surprise.

James V. Stone is an Honorary Associate Professor at the University of Sheffield, England. He would like to thank John Frisby, Nikki Hunkin and Raymond Lister for their comments on this article.

The correct link to James Stone's books is here:
https://jamesstone.sites.sheffield.ac.uk/books