'Letters to a young mathematician' 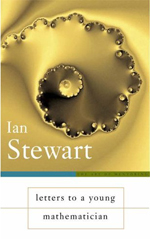 Letters to a young mathematician

With this collection of letters Ian Stewart, accomplished mathematician, science writer, and even science fiction writer, accompanies a young and imaginary student on her path to becoming a professional mathematician. The letters address the questions that arise naturally at the crucial points in "Meg's" career, from leaving school and pondering whether to take a maths degree, through to becoming a fully established mathematician wondering how to juggle teaching and research.

Stewart's answers to Meg's questions give a fascinating insight into maths and mathematicians, combining down-to-earth advice on practical matters, like how to become unstuck on a maths problem, with some serious maths and philosophy. In a light and conversational tone Stewart explains how to go about learning maths and how to teach it, exposes the maths that lies hidden (or not so hidden) in the world around us, explains some big open maths questions and even asks if God is a mathematician.

The result is a collection of 21 essays that contains something of interest for everyone, from the young mathematician of the title to anyone who is curious about the subject. In fact, it's probably those with a maths aversion that, could they be tricked into reading the book, would get the most out of it. Stewart does a great job at differentiating the tedious and seemingly irrelevant equations and formulae we encounter at school from the beautiful and fascinating world of ideas that constitutes "real" maths and motivates mathematicians. With uncontrived examples of the maths inherent in the world around us — in pigeons, dogs and vegetables for example — Stewart convincingly makes the point that our "entire life bobs like a small boat on a vast ocean of mathematics". His descriptions of what inspires mathematicians show that their aim is not to drown all the world's beauty in this ocean (as you might think when you first encounter a maths book full of symbols and numbers) but to take a greater share in it. In fact, some of this book's chapters would make an invaluable addition to the school maths syllabus.

For those that don't need convincing of the beauty and uses of maths, Stewart offers some deeper insights. He explores some of the big problems, like Fermat's last theorem, the four colour theorem and the Poincaré conjecture. His chapter about mathematical proofs explains why mathematicians are so obsessed with them and gives some non-technical, almost non-mathematical examples. And for those who are actively doing maths, the young mathematicians of the title, he has some valuable advice on anything from how to write down a proof to how to deal with the maths community.

This book is accessible to pretty much everyone. The maths is presented in a way that is easy to understand, equations appear very rarely and mostly only in parentheses and Stewart successfully avoids all mathematical jargon. The tone is gentle and light and the self-contained nature of the individual letters allows you to skip those that don't seem too appealing.

I'd recommend this book to anyone with an interest in maths, whether they are young or old, a budding mathematician or an amateur. If you are a teacher, you will find some great anecdotes and examples in this book. And if you are a mathematician, this book might finally get your friends to understand what it is you do all day and why you're doing it.

Marianne Freiberger is Co-editor of Plus.
Tweets by plusmathsorg