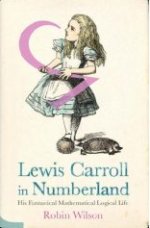 Charles Lutwidge Dodgson sat in the bows of a rowing boat and heaved on the oars in time with another young man who sat in front of him. The prow cut through the glassy river water as the summer sun shone down on the three Liddell sisters sitting rapt in the stern. At a pivotal moment in English literature, Dodgson was enthralling the young girls Alice, Edith and Lorina with a tale of a little girl who spotted a worried rabbit on a river bank, and followed it down a rabbit hole into a world like our own, but very different.

Catching his breath as the oars caught the water, Dodgson was making it up as he went along. Later, at Alice Liddell's request, he was to stay up nearly the whole night writing down as much as he could of this story which had so entertained the girls. Alice's Adventures Under Ground was the result, and it was published a few years later under the title Alice's Adventures in Wonderland with the author's name given as Lewis Carroll, the name Dodgson used to distinguish his popular works from his academic ones. Robin Wilson's Lewis Carroll in Numberland is a beautifully-written and highly entertaining account of the shifting in and out of focus of these two characters, Dodgson the establishment academic and Carroll the playful writer, as Dodgson's life progressed from his quiet religious upbringing in the rural north of England to his untimely death as a superstar entertainer of the Victorian age.

Carroll is such an important figure in children's literature — in literature of any sort — that much has been written about him in the hundred years or so since his death. According to Wilson, most of this analysis has concerned itself with his writing for children, the magic and mathematics it contains, the themes running through it, the links between stories, and so on. An ocean of ink has also been spilt in modern times trying to build a case for something sinister in Dodgson's interest in children, particularly Alice Liddell. Such apparently baseless claims, applying a kind of modern hysteria to Victorian attitudes and without a shred of convincing supporting evidence, are dismissed in a brief but cutting and forceful paragraph by Wilson.

Indeed, Numberland is mainly concerned with the relatively unexplored territory of Dodgson's contributions to mathematics and logic, rather than Carroll's contributions to literature. Of course, the latter was heavily influenced by the former — and was almost certainly more significant — but still it is fascinating to learn of the teaching style and research interests of Dodgson. The two sometimes clashed rather brilliantly. Queen Victoria loved his Wonderland, and wrote to the publisher requesting that she be sent the very next book that Carroll produces. Carroll being Dodgson, of course, she was duly sent An Elementary Treatise on Determinants. Wilson relates, "Queen Victoria was not amused."

Dodgson (pronounced "Dodson") was born in 1832 as the third of eleven children. His lifelong affection for and care of his siblings is a repeated theme of the book. As the eldest boy, he was destined for the church, and certainly had the necessary breeding (his father was the latest in a long line of clergy) and education (the famous public schools he attended stressed the classics and religious education). Mathematics was also in his blood, however, as his father had a keen mathematical mind and had received a double first class degree in classics and mathematics at Christ Church College, Oxford. This, to put it mildly, was an impressive achievement, and gave the young Dodgson something to aim for. At a young age Dodgson began preparing family magazines for his siblings, featuring stories and puzzles often of a fantastical and mathematical nature. A talent for writing already established, the young Dodgson was soon to excel at mathematics too. By the time he reached Oxford, great mathematical things were expected of him.

He did not disappoint. His undergraduate career at his father's college, Christ Church, was a very successful one, which ended with him being the top student and beginning what was to be a long teaching career at the university. This was a pivotal and busy period of his life, in which the main themes of his life were developed. His teaching career began in a varied way, with personal tuition and coaching for Oxford's arduous exams. He also spent a summer teaching at boys' and girls' schools — not always a happy experience, but useful for his teaching skills nonetheless — and soon began his lecturing career. For those of us who work in modern universities and complain about our teaching loads, it is interesting to learn that his were heavier by a long way.

From his tutoring and coaching came the first of many mathematical pamphlets, guiding students for example through Euclid's Elements — the standard maths textbook for around two millennia. His pen name was also invented at this time, since the editor of a popular magazine for which Dodgson prepared stories, puzzles, and other writing thought he should distinguish his two types of writing, mathematical and fun. Dodgson suggested a few names, and we should thank that editor for rejecting Edgar UC Westhill and selecting Lewis Carroll.

Dodgson also began his love affair with photography at this time. The art was relatively new, and very expensive to pursue. It has been said of Dodgson that were he not to find everlasting fame for his writing, he would be remembered today as a pioneering photographer, perhaps the most important photographer of children of the 19th century. He was creative and imaginative in the way he posed his subjects, which included the great and the good of the times, who made a beeline for his little studio built atop his Christ Church apartments.

His strictly mathematical work was not copious by modern standards, and yet he made significant contributions to several areas. His approach to mathematical education was a curious and possibly healthy mix of liberal and conservative. He rejected the fashionable move to cut Euclid from the syllabus, but published many pamphlets and books to guide the student through these ancient and difficult works, bringing some derision for "spoon-feeding" students (some things never change). He contributed some useful work to the solving of systems of simultaneous equations. His great love was for logic, and quite apart from the endless hours he spent developing logic puzzles for the amusement of his siblings (even as adults) and his many child pen friends, he raised and clarified some substantial issues in mathematical logic, drawing praise from the likes of Bertrand Russell.

It may come as a bit of a surprise to learn that Dodgson was politically and socially rather conservative, and was capable of surprisingly strong attacks on political opponents which were only loosely disguised with metaphor and a witty change of a few names. Even his keen attention to children was not particularly unusual for the time, since Victorians tended to view children as pure and almost holy beings deserving of nurture. At least, rich children were seen this way: poor children were sent to work in factories, although even this abuse was romanticised by people with more cash.

Wilson's book recounts all of the above, and much more, with clear language and a great sense of humour. The book is organised into eight "fits" to mimic those of one of Carroll's great works, each focusing on a different area of his life or work. Several of these chapters concentrate on Carroll's puzzles and games, and the reader interested in stretching their mental muscles with his logical gymnastics will not be disappointed. Usefully, solutions and links to further reading are included in a notes section, so you can't accidentally spot the solution. These puzzles are linked by Wilson to the developments in other areas of Dodgson's life, and in particular his mathematical teaching and research.

Dodgson's sincere Christian faith, his love of his family and the duty of care he felt for them after his parents died, his genuine affection for and delight in the company of children, his keen mathematical mind, his brilliant and extraordinary imagination, and his love of the simple pleasures of puzzles, games, and long walks shine through in this wonderful mathemo-biography. Wilson's use of the nearly 10,000 letters Dodgson wrote, many to children, and well-chosen extracts from his many works greatly enhance the book. The illustrations from Dodgson's published work, and his beautiful photographs, make the book a pleasure to flick through and a breeze to read. Numberland is a rabbit hole to the world of wonder which Dodgson created, and to tumble through it is to leave one hungry for more. No greater praise can be given to a biography than that.

Phil Wilson is a lecturer in mathematics at the University of Canterbury, New Zealand. He applies mathematics to the biological, medical, industrial, and natural worlds. He is not related to Robin Wilson, nor, so far as he knows, to any worried rabbits.