Scientists at the University of California have created a material which could be used to make a perfect lens, because a key property of the material - its refractive index - is negative.

When light passes from one medium to another (for example, when a beam of light passes through air and into water, or vice versa), the change of speed causes it to change direction. This accounts for the well-known fact that a stick half under water looks bent: light from the submerged part of the stick changes direction as it reaches the surface, creating the illusion of the bent stick. 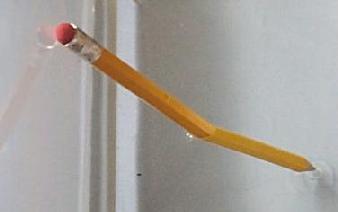 Refraction makes a pencil look bent where it enters water

As light enters a conventional material such as water or glass, it is bent or "refracted". The degree of refraction depends on the material's refractive index

But what would it mean to have a material of negative refractive index? This would be a very odd kind of material indeed, where the light was bent so much as it entered that it ended up on the same side of the normal as it started. Such a material would have very counterintuitive optical properties. However, it could also be very useful. For example, it could be used to make a perfect lens, which focused all the information about a source object at a point. In contrast, lenses made from conventional materials, such as glass, with positive refractive index, necessarily lose some information.

Refraction in a material with negative refractive index

The theoretical possibility of a material with negative refractive index was known about, but until recently it was assumed that no such material existed. Now, however, scientists at the University of California have discovered a material with just this property. Their work built on the creation of materials with bizarre magnetic and electrical properties, by scientists at Imperial College London.

Refractive index is linked to the speed of light in the material, so it may seem that, for a material to have negative refractive index, light would have to travel backwards in the material - it doesn't, of course! The confusion is due to the subtle but important distinction between the "phase velocity" of light and its "group velocity", explained in Faster than light, a news item in issue 12 of Plus. The individual wavefronts that make up the light beam (the "phase") travel backwards, but the beam itself (the "group"), which in this case carries the energy, travels forwards.

The technique is not expected to work for light in the visible part of the spectrum, whose wavelength is too short. However, the team have ideas about how other materials might recreate the effect for visible light.

I'm afraid your final diagram is incorrect. In the case of negative refractive index the light bends away from the normal - that is, upwards in your diagram.

Even I, a philosopher and not

Not so, the original corrector is correct - in the 2nd diagram the arrow should bend higher than the angle it entered, not even lower than the first diagram.