Anyone can attempt to predict where and when lightning will strike, whether by looking at a foreboding sky or counting the time it takes to hear the thunder after seeing the flash (divide the number of seconds by 3 to find out how many kilometres away the flash was). But for the people at NASA things are a little more serious - the multi-billion dollar space shuttle is at stake. They need to know exactly when and where lightning may strike. 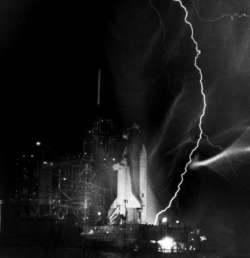 Around Kennedy Space Center, each square mile of ground is struck by lightning on average 42 times per year ... so much for lightning not striking twice! [Image from NASA]

The Kennedy Space Centre (KSC), NASA's primary launch site for space vehicles, is in one of the areas of the US most prone to lightning strikes. Warm moist air from the Atlantic Ocean and Gulf of Mexico moves from the south west and collides with the east coast sea breeze, forcing it to rise and form thunderstorms over Florida. The water and ice molecules help to create positive and negative charges in the clouds, and when there is enough difference in the charges, lightning results. The sound we hear as thunder is the air surrounding the lightning expanding explosively as it is heated to temperatures hotter than the surface of the sun.

The map shows the average annual number of lightning flashes per square kilometer across the world.
[Image from NASA]

Together with colleagues, two researchers from the University of Hawaii have developed a new tool for forecasting lightning, called the Global Positioning System (GPS) Lightning Index. Robert Mazany and Steven Businger used a statistical approach to forecast when lightning might occur, by combining information about water vapour from a GPS receiver at the Kennedy Space Centre with other meteorological data. The GPS satellite radio signals are slowed down by the earth's atmosphere as they are transmitted from the satellite to the receiver, and the more water vapour in the air, the bigger the delay. By analysing this data mathematically, scientists can discover a lot about the atmosphere - including its moisture content.

The GPS Lightning Index is a binary logistic regression model - a statistical model of a yes or no answer dependent on a number of "predictors" - an estimate of the total atmospheric electric charge, the amount of water vapour in the air, the change over nine hours in the amount of water vapour and a final parameter called the "K Index" which predicts how unstable the air will become. Used in conjunction with other resources such as radar and satellite data, the GPS Lightning Index can help make lightning forecasts more accurate. When the index is graphed over time, a pattern emerges. NASA should start getting worried whenever the index falls below a threshold of 0.7 (the index is on a scale from 0 to 1), as this indicates that lightning should occur within the next 12.5 hours.

When the index falls below 0.7 you can expect lightning in the next 12.5 hours
[Image from University of Hawaii]

These are just the sort of predictions NASA are looking for. They need accurate lightning forecasts before beginning any operation, from 90 minute forecasts for shuttle landings to 8 hours for moving the shuttle itself to the launch pad for takeoff. Weather, and lightning in particular, is a major cause of delays and cancellations to space shuttle countdowns at the Kennedy Space Centre. And apart from the improved safety of personnel and the expensive equipment, over a million dollars could be saved each time these delays are avoided.

The researchers tested the GPS Lightning Index against data from the 1999 summer thunderstorm season, and showed it gave a 26% decrease in false alarms and an almost 10% improvement on the lead-time for lightning strikes. Mazany, his colleagues and NASA's bank managers are all hoping that the index will open the door to lightning-fast lightning prediction.