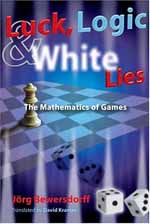 Luck, logic and white lies: The mathematics of games

Anyone who has ever tried to analyse a game mathematically knows that things can get very complicated very quickly. In a game like chess, the number of possibilities for just the first three moves is already enormous, while, in poker, the roles played by chance, strategy and psychology seem to be mysteriously interlinked.

This book sets out to explain the mathematics underlying some of our most popular games and to give a historical perspective on its development. The type of games explored are divided into three categories: games of chance, combinatorial games and strategic games.

Bewersdorff starts with games of chance. Using concrete examples, he gives a basic and quite accessible introduction to probability theory and describes statistical methods that can be used to analyse games based on "luck".

In combinatorial games such as chess, the number of possible combinations of moves is astronomical, meaning that a complete analysis is totally unfeasible. In the second part of the book, we see how mathematics gets to grips with this problem. The basic terms of game theory à la John Nash are introduced, and there are very interesting chapters on the programming of chess computers, complexity theory and Gödel's mindboggling Incompleteness Theorem.

Finally, in the last section we learn about strategic games such as poker, and the role probability theory has to play in creating the perfect bluff.

At the beginning of each chapter the author uses concrete examples of games to introduce the theory. Of course, this makes things easier for the novice as he or she can work through the specific example to understand the underlying concepts. However, there's no getting away from the fact that the maths involved is hard in places, and in difficult situations the author tends to pitch the text at a more advanced level. Things are not made easier by the sometimes clumsy translation from the German and the relatively high number of typographical errors, at least one of which occurs in a table.

For the non-professional mathematician this book will definitely have more of a textbook character than might be expected from reading the blurb on the back. Having said that, some of the chapters are self-contained, and it is possible to pick up little nuggets of information through selective reading.

For a reader with some mathematical knowledge this is an interesting introduction to the mathematics of games, with concise references to the expert literature. However, whether or not it will increase its readers' chances of winning, as the blurb on the back seems to suggest, remains to be seen.