'The magic numbers of the Professor' 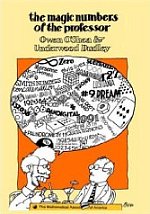 The magic numbers of the Professor

by Owen O'Shea and Underwood Dudley

The Magic Numbers of the Professor revolves around a fictional professor and a huge range of magical numbers. Written in a narrative style, the book documents a series of visits the Professor makes from America to Ireland to visit Owen O'Shea, the author of both this book and a fictional column within the story. The Professor provides ideas for this column and the book largely follows the conversations the two have while discussing various numbers and other mathematical curiosities.

As a book on recreational mathematics, it comes with the highest recommendation: an introduction by Martin Gardner himself, the father of the genre. It then goes into a rapid-fire approach, spraying the reader with endless numbers and various levels of explanation of why they are interesting. The theme of each chapter is centred around the location of O'Shea's meeting with the Professor, and so the mathematics discussed feels no need to attach itself to any one area.

The numbers presented fall into two categories: those that are interesting because of their number theoretic properties (8 and 9 are the only cube and square numbers that are consecutive) and those that are coincidentally linked with a well known event or person (the Apollo 11 mission landed on the Moon on 20/7 and then landed back on Earth at latitude 13 North and longitude 169 West: subtracting gives 20 - 7 = 13, which has 169 as its square). Unfortunately, there is very little distinction between the two types of interesting numbers — it is a shame that the book is not more explicit about when it is indulging in tongue-in-cheek numerology, as opposed to real mathematics. As the Professor correctly states, "all numbers are striking in one way or another," but you do have to wonder if the interesting fact that 202 = (202 + 202)/2 needs the context that 202 people died in the 2002 Bali bombing.

This complaint aside, there was not a single chapter that didn't have me reaching for a pen to try some of the mathematics out for myself. The breadth of topics is impressive, from proposition bets to magic squares, and everyone will find something to whet their mathematical curiosity. Dotted throughout each chapter are various challenges to the reader, which require only a GCSE level of understanding of mathematics and a lot of persistence. These challenges normally take the form of finding extra examples or instances of the maths discussed, such as another way to write 1922 using all nine digits in order (-1 + 234 + 5 x 6 x 7 x 8 + 9, as I eventually worked out). There are full solutions, along with recommendations for further reading, provided at the conclusion of each chapter.

As the book is published by The Mathematical Association of America, there is the expected US bias, complete with a non-mathematical look at different pictures that can be made with a one dollar bill. However, you can forgive the authors for some of their more self-indulgent moments when the overall book is as enjoyable as this is. The introduction to the book suggests that the best approach to reading it is to consume it slowly, one chapter at a time, which is very good advice. If you gradually work your way through the story of the Professor and his magic numbers, you will find some truly fantastic pieces of unarguably interesting mathematics.

Matt Parker is an enthusiastic mathematician whose goal in life is to make more people excited about mathematics. He studied mathematics and physics in Australia before training to be a teacher and working in both Australia and the UK. Matt now writes and speaks about engaging mathematics and his favourite number is currently 28.