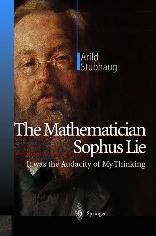 The mathematician Sophus Lie - It was the audacity of my thinking

"I am certain, absolutely certain that...these theories will be recognized as fundamental at some point in the future."

Sophus Lie said these words more than hundred years ago. We know now that he was right, absolutely right. The notions of "Lie groups" and "Lie algebras" are in the vocabulary of every mathematician and physicist today. Lie's theories are indispensable tools for understanding the physical laws of Nature.

In this biography Arild Stubhaug tells the story of Lie's life. Born in 1842 in the western part of Norway, he enrolled at the Royal Fredrik's University of Christiania (now Oslo) in 1859. Lie was a hard-working student, to whom second or third best was a personal defeat, hardly to be endured. After graduating second in his class in 1865, he left university disappointed. He did not know what would become of him; he had not found his "calling".

According to Stubhaug, in the following years Lie suffered from almost suicidal tendencies, but nevertheless decided to continue living. One way he coped with his depression was to go hiking. To him, these long hiking tours were a kind of therapy; they brought him ease and gave him back the will to live.

Gradually he became involved with the university once more, giving lectures on various topics - mathematics had still not become his vocation in life. Ludvig Sylow, one of his teachers from the university, who later made his own major contributions to mathematics, once said that he would never have guessed that young Lie would be one of the greatest minds of the century. However, Lie drifted gradually into the realm of mathematics, and by 1868 he realised "there was a Mathematician hidden inside me".

Lie started to read geometry, starting with Euclid's "Elements", and continuing with books describing a "new geometry". Non-Euclidean geometry was still in its infancy, and in the years to come Lie contributed significantly to this new branch of mathematics. In December 1968, he had one of his first breakthroughs as a scientist. His "Imaginary Theory" became his first scientific publication. It resulted in a travel scholarship - his first tour abroad - during the course of which he became one of the most renowned mathematicians in Europe. Stubhaug tells how Lie started this journey as a clever student and returned to Norway as a famous mathematician. The doctoral dissertation that followed resounded through Europe's mathematical communities.

Just a year after his dissertation Lie was appointed to a professorship in his motherland. He was a Professor in Christiania for almost 14 years. During this period he produced a steady stream of works. Apparently, his lectures were incredibly inspiring and extremely enlightening for the students.

In 1886, Lie moved to Leipzig with his wife and three children to take up a professorship. Leipzig was at the mathematicial heart of Europe, close to the greatest contemporary mathematicians of the time. He was a hard-working man, and Stubhaug tells how he drove himself to a nervous breakdown during his stay in Leipzig. His "beautiful mind" led him to more or less a state of paranoia, and a fear that other mathematicians would not properly recognise his wonderful mathematical ideas. After his nervous breakdown he was never really himself again - he would accuse other mathematicians of stealing his ideas, without properly referring to his works.

In the mid-1890's, Lie started to express a desire to return to Norway. Lie was a Norwegian at heart, and he greatly missed Norway's majestic scenery. In addition, Norway was on the brink of independence, and there were strong political forces at work that wanted Lie back in Christiania. However, it would be several years before he was offered a suitable position in Christiania, and he actually returned home. In 1898 Lie resigned his post in Leipzig and went back to his motherland.

Unfortunately, he did not have long to enjoy his return. Six months later, on February 18th 1899, he died of pernicious anaemia. It was a sad day for mathematics around the world.

Lie was dead, but his ideas were not. On the contrary, Lie's name will forever be written in the science textbooks, his ideas will be told and taught to generations and generations of scientists.

Stubhaug tells the story of the man behind the famous name. He provides us with a reference to Lie's life and time, and gives a complete bibliography of all Lie's published works in one of the appendices. For anybody that is interested and wants to learn more about Sophus Lie, this book is surely worth reading. Knowledge of mathematics is by no means a prerequisite; Stubhaug succeeds in painting a clear picture of this man's genius, while avoiding the mathematical details of his theories.

"Lie theory is in the process of becoming the most important part of modern mathematics. Little by little it became obvious that the most unexpected theories, from arithmetic to quantum physics, came to encircle this Lie field like a gigantic axis."

Book details:
The mathematician Sophus Lie - It was the audacity of my thinking
Arild Stubhaug
Hardback - 555 pages
Springer
ISBN: 3-540-42137-8

Guest reviewer Sigbjørn Hervik is a PhD student in the Gravitational and Relativity Group at the Department of Applied Mathematics and Theoretical Physics, University of Cambridge.