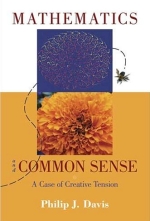 Mathematics and common sense: A case of creative tension

The basis of this wonderful book came in a series of questions about modern maths sent to Philip Davis by a friend of his, Christina. (Curiously enough, Davis quickly points out that the name has been changed to protect her anonymity — are we to assume she would have felt ashamed were her interest in maths to become widely known?) The first two chapters of the book contain the original question and answer exchange in letters between Christina and Davis, before Davis picks up on the important themes raised by these points and expands upon them through the rest of book. Christina's questions are disarmingly simple and penetrate right to the core, brushing through the media portrayal of mathematics and into some deeply philosophical questions. What is mathematics and why is it important? What is it to be a mathematician? What's the public opinion of what a mathematician does day to day? What is the future of mathematics — can the process of constructing proofs be completely taken over by computers?

Davis is expert in his patient explanation of these penetrating issues, and erudite about different fields of mathematics and their history. The original questions are expanded into themed chapters, rich with examples and figures. Some really important issues are tackled head-on, but always with an engaging voice. Why is there a lack of mathematics presented in the public media, even in specialist magazines such as New Scientist? Is it because "real" maths is boring, or impossible to understand by non-specialists, or even irrelevant to society? And as an extension, why should pure maths research, with apparently no immediate benefits to society, be funded by society's tax money? Why is it in the rare occasions that a mathematician is portrayed in a film, the director invariable falls for the clichéd stereotype of stylistically-inept and socially-awkward mumbling genius?

Mathematics and Common Sense describes how the history of maths has seen it stray further from the observable. The origins of mathematics lie in practical applications, such as predicting the best seasonal time for sowing seeds, and it has relentlessly extended further from common sense and into the abstract: irrational numbers that cannot be expressed as a fraction of two integers, but continue with infinite decimal places, or even imaginary numbers that cannot be placed anywhere on the real number line. We are guided through the periods of existential angst in the history of maths, such as during the introduction of irrational numbers like √2 or imaginary numbers. Such concepts, entities that do not settle with the common sense appreciation of numbers and cannot be proven to "really" exist, were violently refuted by the greatest minds of the era. They have simply become accepted over time, and are now all taught without comment at schools.

Davis gives a few examples of mathematical proofs that are clearly impossible in the real world, such as being able to reassemble a golden sphere into two spheres of equal volume as the original, thus doubling your riches with the sleight of a mathematical hand. But it is the discussion on the nature of proofs that I found most interesting, an issue that is becoming deeply troubling for some mathematicians. Historically, proofs have stood for centuries before eventually being challenged and invalidated by later mathematicians. How do you know when something is definitely proved? People examining a new formulation can check for local consistency but not completely verify the proof. For example, the 1998 proof that the "fruit-sellers' arrangement" is in fact the optimal packing arrangement of spheres (such as apples in a crate) contained 250 pages of text and 3 Gb of computer data. Even after four years of focussed study the analysis panel admitted they could probably never be 100% certain of the validity of the proof. Some famous proofs run into 15,000 pages of text — how could anyone ever study such a behemoth deeply enough to be certain it is water-tight? What about proofs reliant on the output of computer programs — can you ever confidently discount the possibility of a subtle but pernicious bug in the code?

There certainly is a lot of food for thought in this gem of a book, and I immensely enjoyed reading it. I did find some of the discourses a little muddled-up though, with pieces of the same thread dispersed throughout the book — a confusing situation only made worse by the absence of an index. Also potentially irksome is that many of the references listed in the "Further Reading" sections at the end of every chapter are radio or TV shows, or even the author's personal emails, and so are utterly impossible to read up on. Better use could have been made of footnotes to cite references and so reserve the recommended reading lists for genuinely useful follow-ups.