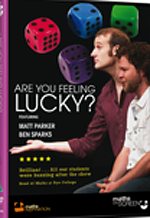 Maths Inspiration delivers inspiring, fun and educational maths lectures to live audiences of school students (read a review here). In response to demand from teachers and parents, the latest shows, specially for students aged 13-16, have been filmed. This is a review of the resulting DVD box set, which is available to order here

"Find something you're passionate about and do a little of it every day." This sentence struck a chord with me recently whilst I was listening to the radio. I don't very often get to indulge my twin passions of maths and live theatre simultaneously, but when I read about the Maths Inspiration events I jumped at the chance to do just that. There is something electric about the buzz in an auditorium before a show starts that is a mixture of hopeful expectation and speculative possibilities, plus, if you're anything like me, the excitement of seeing famous names up close and being a little bit star-struck. So it was as I sat in the dark of a theatre in Reading awaiting a performance boasting a cast of: Rob Eastaway, Matt Parker, Colin Wright and Paul Shepherd. The five star review I would have given afterwards, if anyone had asked me, would have included some concise way of explaining how good it felt to see both pure and applied mathematics being so engagingly presented and promoted to so many students simultaneously. Plus I got the chance to talk to some of the speakers about what made the shows worthwhile for them.

For me, being a teacher has always meant bringing my passion into the classroom in order to enthuse those I teach with a little of the magic and wonder that are the reasons I love maths. However, there are practicalities that have to be negotiated and compromises made in order to do this. Whilst I would be the first to argue that film footage is no substitute for the real thing, as YouTube has proven, it can be a fabulous way to share inspiration and get people hooked to find out more about something. Consequently the DVDs of the Maths Inspiration shows are a great taster of the live events and allow easier access to the joys of mathematics without the palaver of booking coaches and filling out risk assessments.

As any theatre lover will tell you there are different reasons for picking a show, sometimes it's the story, other times it might be the cast members — for me the latter usually wins out. The range of maths covered in these six DVDs is extensive and sure to contain something for everyone. There were things I, as a maths teacher, had come across before, but plenty I hadn't. And as those of us whose job it is to engage and inspire on a daily basis know, delivery is everything! I defy anyone not to be carried along by Andrew Jeffrey's sheer personality on stage; his quick wit, slick delivery and ability to think on his feet mark him out as a teacher but also a consummate performer. This goes too for many of the other presenters, I sat spell bound by Collin Wright's patter: his juggling and jokes, executed with the rapid fire you'd expect from a top flight stand up comic, but illustrating some seriously complex mathematics underneath the laughter. It's easy to see why Rob Eastaway is Radio 4's maths pundit of choice. The way he engagingly weaves an element of curiosity through current affairs and the seemingly everyday normality of life inspires you, much like Alice and the white rabbit, to follow keenly into the unknown, wanting to know what, why and how?

The option to buy and use clips of these DVDs in the classroom is definitely one I would take up, although my suggestion would be to share out the review task in a department meeting perhaps, as eight hours of straight maths, even presented like this, is a box set marathon not for the faint hearted! Maths Inspiration does what it says on the tin and the option to access this in your school will be an inspiration to all viewers, whether it is to see a live show, follow up some of the presenters or decide that maths is fascinating both recreationally and as a career option.

You can order the DVDs on the Maths on Screen website.

Fran was a maths teacher for 13 years in Suffolk, Cambridgeshire and Bedfordshire before joining the team of our sister site NRICH in September 2013 to take over the running of the Hands-On Maths Roadshow. She has travelled far and wide in her first six months, current extremes being South Korea, Gibraltar and Keighley, promoting NRICH activities and her passion for mathematical origami.

See here to find out how to book the Hands-On Maths Roadshow for your school or follow it on Twitter.