Maths in a minute: Escape velocity 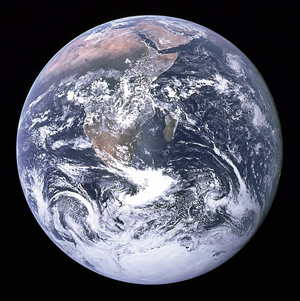 Dying to get away?

When you jump up into the air you'll come back down to the Earth with a bump. That's not because the laws of nature categorically forbid you leaving the Earth, but because your jump isn't powerful enough to escape the Earth's gravitational field. To do that, the speed of your jump would have to exceed, or be equal to, the Earth's escape velocity which we can calculate quite easily as follows.

When you jump into the air your kinetic energy is

is your mass and

is your velocity. The potential energy you experience due to the Earth’s gravitational pull is

is again your mass,

is the mass of the Earth and

is the Earth’s radius. For you to be able to escape from Earth, we need

, is defined to be the smallest velocity that allows an object to escape, so

Filling in the values

Putting this into your calculator gives which translates to

You can use the same calculation to work out the escape velocity of any spherical body, as long as you know its mass and radius.

of the object that is trying to escape, as

cancels out. So in theory you would need to achieve the same velocity to escape Earth as, say, an elephant. We should point out, however, that our calculation ignores the effect of air resistance which would effect you and the elephant differently. What is more, if you reached such a high velocity within the Earth's atmosphere, you would burn up. To avoid this, you or the elephant should first get yourself into an orbit in which the Earth's atmosphere is weak or non-existent, and then accelerate to the escape velocity needed to escape from that orbit. Find out more here.

Incorrect conversion from m/s to km/h

Permalink Submitted by Anonymous on May 23, 2019

units and result should be different