Maths in a minute: Representing groups

This article is about understanding abstracts objects called groups. If you don't know what they are, then you might want to read this brief explanation.

Move the slider to rotate the 12-gon. Whenever you have rotated through a multiple of 1/12th of the full circle, the 12-gon looks the same.

In the introduction to groups we just mentioned we gave two examples of a group. One example came from the 12 hour clock. Here the group consists of the numbers 1 to 12 with the operation of addition modulo 12, which means that when you have gone around the clock face once, instead of carrying on counting 13, 14, 15, etc, you start from the beginning again, counting 1, 2, 3, etc.

The other example came from a regular 12-gon — that's a shape in the plane with twelve sides that all have the same length, and twelve internal angles that are the same size (see the image on the right). Rotations around the centre point of the 12-gon through angles of 1/12 of a circle, 2/12 of a circle, 3/12th of a circle, etc, up to the rotation through a full circle, leave the 12-gon unchanged so they are symmetries of the 12-gon. These rotational symmetries also form a group. The operation for combining two group elements here is simply to perform one rotation after the other.

It's not too hard to see that our two examples of a group are very similar. Each consists of twelve elements and you can associate to an element of one group exactly one element from the other group and vice versa: the number 1 can be associated to the rotation through 1/12 of a circle, the number 2 to the rotation through 2/12 of a circle, and so on.

This one-to-one correspondence between elements of the two groups respects the operations on the groups. For example, adding the numbers 2 and 5 gives you 7, and combining the rotations associated to 2 and 5, through 2/12th and 5/12th of a circle, gives you the rotation through 7/12th of a circle, which is exactly the rotation associated to the number 7. When to groups behave the same in this way, we say that they are isomorphic. 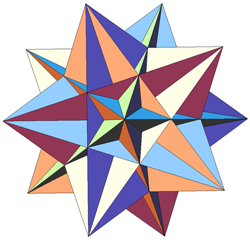 The collection of symmetries of an object form a group. This image shows the sixteenth stellation of the icosahedron. Image: Jim2k.

As you can imagine, this multi-lingual way of talking about groups can result in a bit of a mess. When you study groups as abstracts objects, not linked to a particular example like a clock face or 12-gon, it would be good to agree to describe them using just one type of mathematical object. Luckily it turns out that every group can be written down in terms of matrices — these are arrays of numbers any two of which can be combined in a particular way (see here to find out more).

As an example, if you place your 12-gon in a co-ordinate system so that its centre lies at the point

, then the clockwise rotation through 1/12th of a circle can be written as the matrix

where angles are measured in radians. Similarly every other element of the group can be written as a matrix. Isomorphic groups can be represented by the same group of matrices.

Representation theory is all about studying groups by representing them as groups of matrices. This not only gives us a unified language in which to talk about groups, but also makes it easier to understand them because matrices are objects that mathematicians know intimately and understand well.