One of London's most loved landmarks, the dome of St Paul's, has looked over the city for more than three centuries. However many people don't realise that it hides an intriguing example of the interplay between maths and architecture.

Seen from the outside, the building is crowned by a glorious hemispherical dome supporting a magnificent lantern. But what you see from the inside is not the same as what you see from the outside. Sir Christopher Wren created an ingenious design of three nested domes: a hemispherical outer dome to dominate the skyline, a steeper inner dome more fitting with the internal dimensions of the cathedral, and a hidden middle dome. 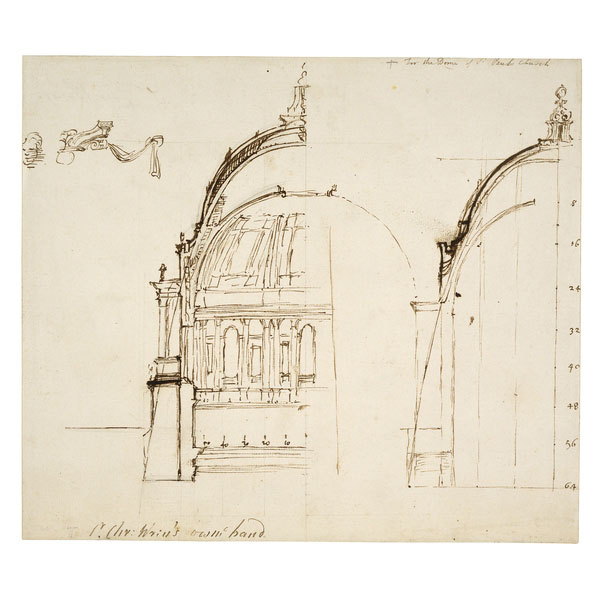 Christopher Wren's sketch for the triple dome design for St Paul's cathedral. It clearly shows his plotting of the cubic curve, y=x3, to give the shape for the middle dome. (Image from the British Museum)

This early sketch (c. 1690) of the triple dome design shows Wren using a mathematical curve to define the shape of the middle dome; the cubic curve y=x3 is clearly plotted on axes marked on the design. The curve not only defines the shape of the middle dome but also the height and width of the surrounding abutments, positioned so as to contain a continuation of the cubic curve to ground level. Wren was applying the theory of his colleague Robert Hooke about the mathematical shapes of ideal masonry domes and arches, one of the earliest instances of mathematical science being used as part of the design process.

In 1675 Hooke published the anagram Ut pendet continuum flexile, sic stabit contiguum rigidum inversum, which translates to "as hangs the flexible line, so but inverted will stand the rigid arch". Hooke had correctly understood that the tension passing through a hanging cord is equivalent to the compression in a standing arch. And so the natural form of a hanging cord — a catenary — would also be the shape of the line of thrust of an arch. For an arch to be stable it needs to contain this line of thrust, either in the material of the arch itself or in its abutments. Therefore the ideal shape for a masonry arch, the shape requiring the least material, is a catenary.

Hook and Wren thought that the ideal shape of a masonry dome would be the cubico-parabolic conoid created by rotating half of the cubic curve, y=x3. Their mathematical descriptions were very close but the correct equations defining the shape of the catenary and the ideal dome were discovered much later (you can find the details in an excellent paper by Jaques Heyman).

The design of the triple dome continued to evolve after this drawing, with the use of experimental models and the impacts of economics and aesthetics deciding its final shape. The middle dome, as finally constructed, is no longer the pure geometric form of the sketch. But it is clear that its shape is derived from the mathematical concept of a cubic curve, one of the most awe-inspiring instances of the role of mathematics in architecture.

You can read more about the mathematics of architecture and the design of St Paul's at the online exhibition, Compass & Rule, at the Museum of the History of Science, Oxford. The site includes some fascinating footage of the geometric construction of classical architecture using just a compass and rule. You can uncover more maths in our urban environment at Maths in the City and find out more about the maths of engineering and architecture here on Plus.

Read more about...
engineering
Maths in a minute
Tweets by plusmathsorg