Maths in a minute: Take it to the limit 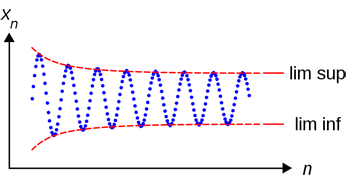 , for example the one shown in the picture? Here’s how to do it for the limit superior. First look at the whole sequence and find its least upper bound: that’s the smallest number that’s bigger than all the numbers in the sequence. Then chop off the first number in the sequence,

Read more about...
limit
Maths in a minute
Tweets by plusmathsorg