The book of Universes and interstellar trade

John D. Barrow is continuing his public lecture tour to promote his new Book of Universes. You can catch him at Gresham College in London on March 1st (admission free) and at the Bath Literary Festival on February 27th (admission £7, concession £6). Clicking on the links will take you to the relevant websites with more information on times and places. 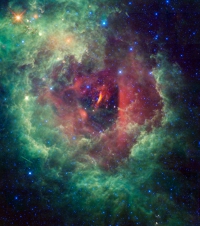 You'll encounter universes where the laws of physics can change from time to time and from one region to another, universes that have extra hidden dimensions of space and time, universes that are eternal, universes that live inside black holes, universes that end without warning, colliding universes, inflationary universes, and universes that come into being from something else – or from nothing at all. Gradually, we are introduced to the latest and the best descriptions of the Universe as we understand it today, together with the concept of the multiverse – the universe of all possible universes – that modern theories of physics lead us to contemplate.

If you're in London, you can actually see Barrow twice on the same day, as on March 1st he's giving another free lecture at Gresham College, called Doing business in interstellar space. In this lecture Barrow imagines interstellar trade at speeds close to the speed of light. It would have to incorporate the insights of Einstein's special theory of relativity, which teaches us that clocks on board a spaceship moving at high velocity will ensure time at different rates relative to clocks at the point of departure. This means that time travel into the future is possible. Which time-keeping should we use? What would happen to economics if time-travel to the past was also possible?