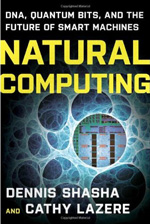 By Dennis Shasha and Cathy Lazere

Computing is at the heart of our modern world, but what are its frontiers? In this book, based on a series of interviews with fifteen leading computer scientists, the authors present the new trends in this fast growing field. Although the research interests of the scientists featured in this book range from spacecraft control to embedding intelligence in bacteria, they all coincide in one fundamental point: the future of computing is a synthesis with nature. Taking this common denominator as the starting point, the authors divide the book into three parts in which they describe how this goal can be achieved. The book is written for a general audience and no background in maths or computer science is required.

The first part of the book shows how nature can be used as a guiding principle in order to design new ways of computing. For instance, if one has to design a spacecraft that has to operate millions of miles away and in a harsh environment, then the most cost effective and efficient solution is to design a machine that can repair itself. Similarly, designing a machine that can handle every possibility may be very expensive and impractical since it can fail if it has to face a new case that the designers have not considered. Instead, it is much better to construct a machine that can learn and adapt to new scenarios, even the unthinkable ones. This new way of thinking can be implemented in different ways, but all scientists agree in that evolutionary or self-learning algorithms have to play a crucial role. As a particularly interesting example, the book explains how evolutionary algorithms have been successfully applied to buy or sell treasury bonds in the stock exchange and become rich!

In the second part of the book the authors present the research of scientists who propose to substitute silicon as the building block of all computers by biological entities. This idea may seem outrageous at first, but the scientists show how DNA or even bacteria can be harnessed to compute. This presents a great advantage over conventional computers since it is incredibly cheap (bacteria only need water and sugar to survive), and if it can be made to work then we can embed biological computers into our bodies. Although we are still far from achieving this, scientists have shown how DNA can be used to solve complicated mathematical problems. An example is the travelling salesman problem of finding the shortest route through a collection of cities, such that each city is visited only once.

Finally, in the last part of the book the authors show how new applications may require us to rethink the physics of computation itself. For instance, in order to design new drugs it is very important to determine how the proteins fold. This is a very hard computational problem because of its complexity: proteins are made of thousands of atoms and their shape is determined by the interactions between all of them, so determining how proteins fold requires lots of processors working together and exchanging information between them. This latter aspect makes the computation very slow. A scientist working on this problem has designed a computer in which information is exchanged only between neighbouring processors, therefore sidestepping the previous limitation. This has speeded up the computation by a factor of 1000!

And what about quantum computers? Although we are still far from building one, scientists are thinking of what one could do with them. More precisely, scientists are constructing new algorithms for quantum computers such that highly complex problems (for example factorising a large number) could be solved much faster than with any conventional computer.

This book offers a glimpse of what the future of computers may hold. Some of the new developments remain highly hypothetical, like quantum or biological computers. On the other hand, some of these new ways of thinking have already been brought into practice and in a very successful way, like evolutionary algorithms or superfast computers. In this sense the book is very inspiring; a lot of progress has already been made learning from the natural world, but there is still a long way to go! Let's compute!

Pau Figueras is postdoc in the Department of Applied Mathematics and Theoretical Physics at the University of Cambridge. He works on general relativity and in particular on higher dimensional black holes. Among other things, he's interested in finding methods to construct, numerically, new black holes of interest.