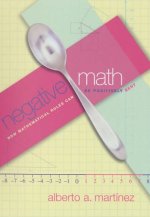 Negative math: how mathematical rules can be positively bent

By Alberto A Martínez

This book starts gently enough, easing us in with the unarguable 2+2 = 4. But don't let this lull you into a misplaced sense of comfort; the ride is going to get very unsettling indeed. Martínez writes with an easy-reading clarity to tackle some of the simplest, but no less profoundly important, assumptions of mathematics. We hear how over the recent history of mathematics seemingly innocuous concepts were as controversial as genetic modification or animal testing are nowadays. There was a long period when negative and imaginary numbers were treated with uneasy suspicion or even outright rejection by mathematicians around the world. Negative Math tells their story.

When you think about it, negative numbers don't actually exist in any real sense — you can't have a basket holding negative 4 apples. In fact you can never have less than nothing of anything. One way out is to think of negative numbers as involving some sense of direction. For example, -3 could be thought of as corresponding to taking 3 steps to the left on a number line. Alternatively, owning negative £5 could be thought of as being in debt £5 to your bank. But in these senses, it is the positive number which is the actual quantity, with the sign nothing more than a symbol denoting a process to perform on the quantity, such as "move left" or "owed". In this way, positive numbers are "more real" than negatives.

Martínez goes on to show how the concept of negative numbers can also produce some down-right ridiculous conclusions. For example,

would be taught in schools without the slightest suggestion of controversy, but mathematicians in the 1800s were deeply troubled by this simple equality. When you actually stop to think about it, this equality does seem utterly absurd — how can the ratio of a smaller quantity to a larger be the same as the ratio of the larger to the smaller?

Things get even stranger when considering the square roots of negative numbers such as √-1, the so-called imaginary numbers (although Martínez tells how some people have pushed for them to be rebranded as "normal numbers" to help them get over some early bad press in the mathematics world). Whilst -5 apples can be thought of as a debt to a greengrocer, having √-1, or i, apples is simply impossible. The number i is not greater than 0, or less than 0, or equal to 0 itself — it does not exist anywhere on the number line at all. Asking whether you'd rather have one apple or one + i apples is a completely meaningless question. How then is the concept of imaginary numbers absolutely crucial to certain areas of real-world mathematics, such as the design of safe bridges? Martínez explains all.

It was questions just like these that created great rifts in mathematics for two hundred years. Algebra was becoming steadily more symbolic, using concepts of negative and imaginary numbers, and less arithmetical, no longer using only "real" quantities, like three apples. This drove some mathematicians to consider algebra, with its dependence on these "meaningless" concepts, as a rogue discipline, inferior to the "purer" geometry with its description of real constructions. In fact, Martínez explains how mathematics in the 1700s suffered something of a deep philosophical crisis over the matter of impossible quantities such as imaginary and negative numbers. Most interestingly, Martínez explains how this deep divide was never truly resolved. The physical existence of imaginary numbers cannot be proven — you can only chose to either accept or reject their use. Instead the opponents simply died off and negative and imaginary numbers became gradually accepted simply because they are handy in calculations.

Martínez goes on to compellingly demonstrate how many of the assumptions of algebra were simply historically decided as "just so". For example, why should the product of two negative numbers arbitrarily switch to being a positive number? Why is -4 + -4 = -8, but -4 × -4 = 16? There is an asymmetry in "standard" algebra, biased against negative numbers. Martínez shows how an alternative algebra can be invented, changing the "laws" of maths to develop a completely new system, just as the mid-1800s saw the invention of new non-Euclidean geometries. For example, you can rewrite the standard rule to demand that the product of two negatives is itself a negative. Thus the uneasy problem of imaginary numbers has been simply wiped out — the root of -9 is just -3. Martínez tests other consequences of the made-up rules, leading us on an exploration of his new algebra. This isn't just an academic exercise though; a different system devised by Hamilton, called quaternions, evolved into the vector algebra that is now used extensively by physicists to describe the real world in another way.

It is fair to say that Negative Math completely blew my mind. I had absolutely no idea that these issues surrounding negative and imaginary numbers had been so deeply problematic in maths history. Martínez's superb writing makes even the most subtle arguments and paradoxes seem obvious, but don't expect this short book to be easy sailing. It will set your mind racing, although every page is absolutely worth the effort.

Lewis Dartnell read Biological Sciences at Queen's College, Oxford. He is now on a four-year combined MRes-PhD program in Modelling Biological Complexity at University College London's Centre for multidisciplinary science, CoMPLEX. He is in the second year of his PhD research in the field of astrobiology, writing computer models of the space radiation striking Mars to predict whether alien life could possibly be surviving near the surface.

In 2003 he came second in the THES/OUP science writing competition, and in 2004 was awarded second prize in the Daily Telegraph/BASF Young Science Writer Awards.