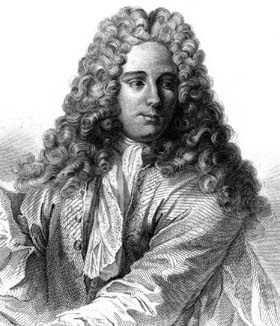 Pierre Louis Moreau de Maupertuis
Born on the 28th of September 1698 in Saint Malo, France
Died on the 27th of July 1759 in Basel, Switzerland

For an originator of the principle of least action, Maupertuis led a surprisingly productive life, shunning neither effort nor intrigue. His early academic studies focussed on philosophy and music, were interrupted by a stint with the Musketeers, and resumed in Paris, where his interest in mathematics began to blossom. His first paper as a member of the Academie de Sciences explored the influence of a musical instrument's shape on the sounds it produces, and was followed by a range of works on mathematical curves. The entirely non-mathematical Salamander - yes, the amphibian - was the topic of another of his papers from that period.

Keen to expand his mathematical expertise, Maupertuis relocated to Basle in 1729, where he lived with and studied under none other than Johann Bernoulli. Back in Paris, papers on astronomy, mechanics and differential equations followed, and Maupertuis established himself as an eclectic mathematical talent. But it wasn't all theory. In 1736 Maupertuis set out on an expedition to Lapland, his mission to measure the length of a degree along the meridian. After enduring swarms of pesky insects, terrible cold and being shipwrecked, Maupertuis returned in 1737 with the knowledge that the Earth was oblate ... and two native Finnish girls. The latter did not further his academic standing, instead they laid him open to ridicule from his enemies.

And enemies there were many. Maupertuis, who was given to penning venomous attacks on his opponents, managed to fall out with Johann Bernoulli and later also with Voltaire with whom he had become friends after the expedition. On the upside, his academic talents inspired the interest of Frederick the Great, who in 1740 invited him to become president of the brand new Berlin Academy. After visiting Frederick in Berlin, Maupertuis ended up on the battle field on the side of the Prussians, was taken prisoner by the Austrians, but was eventually released, shaken but unharmed. In 1746, after his career had made good progress in Paris, he did take the presidency of the Berlin Academy and moved to Berlin permanently.

Maupertuis talents were indeed eclectic. He published on a range of subjects including mathematics, philosophy and astronomy. A hundred years before Darwin he almost formulated Darwin's theory of evolution. But it is probably the principle of least action that he is most remembered for now. The principle says that physical systems, in getting from state A to state B, always choose the path that minimises the effort required. This begs the question of who or what does the minimising, and the principle opened up all sorts of cans of teleological worms.

Maupertuis was extremely proud of his principle of least action, so it came as a shock when he accidentally recommended a paper for publication which stated that it wasn't him but Leibniz who first postulated it. The resulting priority dispute cast a shadow over the last years of his life and had an adverse effect on his health. In 1756 he left Berlin for good and three years later died on a journey he undertook to improve his health.

And for more on the principle of least action read the Plus article Frugal nature.