News from the world of maths: Plus was brought to you by light

Plus was brought to you by light 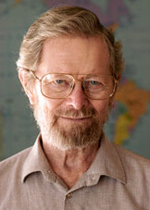 Information is transmitted over the internet using light. A flashing laser beam is directed through optical fibres, with the flashes encoding the 0s and 1s that make up digital information. This process works because when the light beam hits the glass walls of the fibre, it bounces off and is moved forward. Optical fibres had been used even before the invention of the laser, for example by doctors to look into people's stomachs, but they were only capable of transmitting information over very short distances, as the light quickly leaked away when travelling through the fibre. When Charles Kao started working in the field in the 1960s, his aim was to improve the technology so that all of 1% of light would arrive at the end of a 1km long cable. Today, due to Kao's work and the generation of scientists he inspired, this number has increased to 95%! As a result, the network of optical glass fibres that spans the Earth today is over 1 billion km long. If you wrapped that length around the Earth, you would span it more than 25 000 times.

Light also plays an important role in the work of the other two prize recipients. Boyle and Smith were trying to develop larger memory capacity for computers, when they realised that Albert Einstein's photoelectric effect could be put to good use. According to this effect, electrons can be "knocked about" using light. Boyle and Smith realised that by knocking electrons out of light sensitive cells sitting in a silicone plate, they could transform an optical image into electric signals, which in turn could be turned into digital information. By 1975 Boyle and Smith had used their invention to construct a digital video camera which was good enough to manage TV broadcasts. In 1995, the first ever fully functioning digital camera was produced, and the rest is history. And although the CCD sensor has recently been challenged by another piece of technology, the complementary metal oxide semiconductor, bets are still on as to which of the two will rule the future.