Rachel Thomas Share this page
If you, or someone you love, have advanced breast cancer, you might consider any price worth paying for an extra six months of life. So it is understandable that patients and their families are disappointed by the draft guidance released this week recommending that a promising new drug is not made available under the NHS.

The drug trastuzmab emtansine (sold under the brand name Kadcyla) could potentially extend a patient's life by nearly six months when compared to the currently available treatments. But the National Institute for Health and Care Excellence (NICE) have decided that it does not work well enough to justify the high price the NHS is being asked to pay for the drug: estimated to be £90,000 per patient.

To make this decision NICE didn't consider simply the amount of extra time patients may gain from the drug, they instead measured the benefit to patients in quality adjusted life years, or QALYs. One QALY is equivalent to one year of life lived in perfect health. If your quality of life is reduced, say your mobility is affected or you are in pain or discomfort, one year of life would be equivalent to less than one QALY. (You can read more about how quality of life is measured in the article The economics of health.)

Patients receiving Kadcyla in the trials of the drug had, on average, 1.21 years before the disease progressed further, during which time their quality of life was assessed at 78%. They then had a further 1.95 years with a quality of life of 50% due to the worsening of the effects of the disease. Together, these give 1.21 x 0.78 + 1.95 x 0.5 = 1.92 QALYs for patients receiving this new treatment. This is around 0.49 QALYs higher than for patients on existing treatments offered by the NHS. 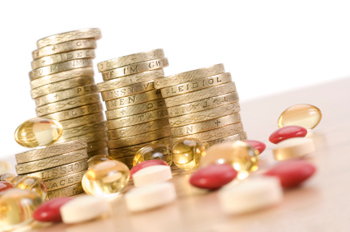 Is the treatment worth the extra cost?

Clearly this drug would benefit these breast cancer patients. But the NHS has to manage under a finite budget and approving the use of expensive treatments for some patients may come at the expense of others. "We are very aware of the importance that people place on life-extending cancer drugs and a decision not to recommend a cancer treatment for routine NHS funding is never taken lightly," says Sir Andrew Dillon, Chief Executive of NICE. "We apply as much flexibility as we can in approving new treatments, but the reality is that given its price and what it offers to patients, it will displace more health benefit which the NHS could achieve in other ways, than it will offer to patients with breast cancer."

or around £166,000 pounds per QALY gained. And after this figure is refined further, such as including additional costs for managing the side effects of the patients illness and treatment, the ICER rises to £185,000 compared to existing treatments. This is far above the threshold of £30,000 per QALY gained that NICE normally uses to approve new treatments.

The decision isn't quite final. NICE have released their draft guidance for consultation until 19 May. "We had hoped that Roche [the drug manufacturer] would have recognised the challenge the NHS faces in managing the adoption of expensive new treatments by reducing the cost of Kadcyla to the NHS," says Dillon. "We hope the manufacturer will act in the best interests of patients and use this consultation period to look again at their evidence and consider if there is more they can do." Patients will have to wait until the end of May to find out if Roche, or NICE, change their minds.