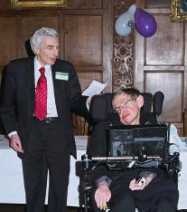 Sir Martin Rees is currently Astronomer Royal and holds a Royal Society Research Professorship at the University of Cambridge where he has spent most of his career. In addition to his technical scientific work, he is well known as a popularizer of science, and is the author of a number of popular books on science including "Our Cosmic Habitat", reviewed in this issue of Plus. He took some time to chat to Plus about the extraordinary universe we call home.

When astronomers use their telescopes to look at far-away stars, what they see is far in the past. How was the universe different then?

When we look at objects a long way away, the light set out a long time ago, and therefore we see the universe not as it is now, but as it was a long time in the past. We think the universe is expanding, which means that in the past everything was closer together. The galaxies were closer together, and we see the galaxies as they were when they were younger.

With our telescopes, we can now look back very far indeed. We can look back to a time when the universe was about 7 times more compressed then it is now, and the density therefore was higher then it is now by 73.

When we look at a distant galaxy, we infer from how much the wavelength of its light has stretched, how big the universe was when the light set out. To infer how far in time we're looking back is a bit more difficult, because that depends on whether the expansion rate of the universe was less or greater in the past than it is now, so it's not enough to know the present rate of expansion. So although I can say confidently that when that light set out the universe was 7 times more compressed, I can't say exactly how much younger the universe was then. If the universe was expanding at a constant speed, then when the universe was 7 times more compressed, it would have been 7 times younger, we would be looking back six sevenths of the time since the Big Bang, but it's not quite that simple, because we don't know for certain if the expansion has been slowing down or speeding up, and for that reason, we can't say definitely what the age of the universe was, at the time when the light set out from distant galaxies. But we can definitely say that they are much much younger than today's galaxies, and we're not surprised that they look quite different. 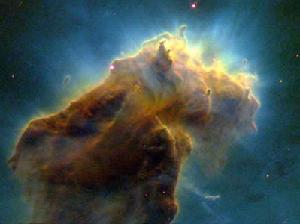 The current best estimate is that, at the limit of our telescopes, we are looking back to when the universe was probably about a tenth of its present age. The current estimate for the age of the universe is about twelve or thirteen billion years.

When astronomers look through their telescopes, they see so far that features not visible to us on our familiar earthly scale become apparent. Here on earth, we think we live in a flat universe, but are we right?

When we look at a distant object, we can imagine drawing a triangle, of which one vertex is at us, and the other two are at the sides of the distant object. (Think of a very long thin triangle.) If we are truly living in familiar, flat Euclidean space, then of course the angles of the triangle will add up to 180o. And if we know how big the object is, then we can relate that to the angle and to the distance, in the way that we all know from school trigonometry.

But according to Einstein's theory, our universe may not be flat. It could be that the angles of the triangle add up to less than 180o or more than 180o. (See this issue's mystery mix for a comparison of Euclidean, hyperbolic, and spherical geometry.) We can test this by looking at very distant objects, whose angular size we can measure, and whose linear size we know. And then by comparing them, we can infer whether the geometry of space-time is flat. What we've learnt in the last couple of years is that it does seem that we are living in a universe which is flat in that sense, in the sense that the angles of a triangle add up to 180o.

Does that fact have any connection to the change in the expansion rate of the universe?

Well, if the universe is flat, this tells us something about the total amount of mass and energy in it. And the other thing we know is that this mass and energy in the universe is made up of three different ingredients. The ordinary atoms are only about 4% of the total, then there's about another 25% or 30% which is in the form of what we call dark matter. This is stuff which exerts a gravitational pull, but which we can't detect directly. We think it's some kind of particles left over from the Big Bang. That leaves about another 70%, which is something still more mysterious. It's energy latent in space itself, and that energy is different from ordinary matter, in that it causes a gravitational repulsion, not a gravitational attraction. That's because in Einstein's equations, pressure as well as density enter in, and this energy latent in space has a negative pressure, which counteracts the positive density.

And so we're in a universe whose dominant constituent, energy latent in space, causes the universe to speed up in its expansion. This means that if you watch a galaxy for millions of years, it is not only getting further away, but it is accelerating away. Of course this is happening at far too long a time scale for us to verify experimentally. 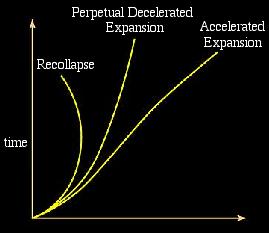 Possible Future Trajectories of the Universe

In general, a theme of your book is to explain what makes this universe the way it is, and why it is that we can live in it. You talk about two numbers, the density and roughness numbers, that are crucial in understanding this universe.

Well, as I said, the density of the universe is important in determining the geometry, whether it is flat or not. Another intriguing feature of our universe is that it is smooth on a very large scale. But of course it has structures in it, stars and galaxies and clusters of galaxies. We would like to understand why it has this mixture of smoothness and roughness.

To give an analogy, it is rather like the surface of an ocean, where, if you are in the middle of a rough sea, you will see a lot of waves, long swells, and so on, but nonetheless, if you average out to your horizon, you can talk about the average properties of waves, because even the biggest wave is small compared to the distance to your horizon.

Our universe is like that. There are galaxies, and there are clusters of galaxies, but even the largest cluster is small compared to the distance we can see using our telescopes. So that allows us to talk about the average properties of our universe. We couldn't if the largest clusters were on a scale similar to the size of the universe, if the analogy were not with a rough sea, but with, say, a mountain landscape, in which one big mountain can dominate the entire view, so you can't really talk about averages.

So our universe is smooth, in the same sense that the surface of the ocean is smooth - there are lots of features in it but on a large scale we can talk about average properties. And that makes cosmology simple, otherwise we could not talk about average densities. 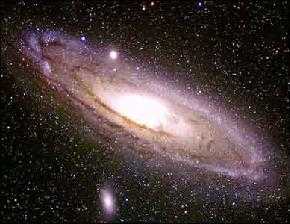 There would be different cosmologies for different parts of the universe!

Right. But of course on the other hand if our universe was completely smooth it would consist now of a very dilute gas of mainly hydrogen! No stars, no galaxies and no people. So the universe had some irregularities in it, which developed into galaxies and stars.

There is a particular number, which has a value of about 0.00001, one part in one hundred thousand, which measures, in a natural way, the roughness of the universe. We can pin down this number observationally. What we don't yet really know is why it has that value.

Is it quite a special value?

Well, it's fairly special, in the sense that if the universe was much smoother, if that number was, say, 10-7 rather than 10-5, then there would be no stars and no galaxies. On the other hand, if it was much larger, say 10-2, then we would not be able to do cosmology so easily, because we would not be able to take averages over our universe and, moreover, there probably wouldn't be any stars or galaxies, because if that was the case the universe would have developed huge lumps early on in its history, which would have developed into vast black holes. So a habitable universe has to be one that's not too rough and not too smooth.

We don't yet have any very good idea of why our universe has that particular degree of roughness. We suspect that the answer to the question lies right back at the beginning. It might even be that these fluctuations are really quantum effects, imprinted when the entire universe was of microscopic size. 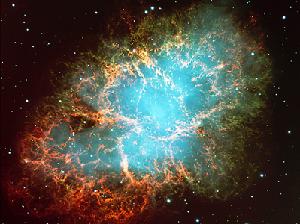 The Big Bang Theory is very widely accepted now. What sort of thing could have disproved it?

Well, for instance, the Big Bang Theory predicts that the material emerging from the Big Bang is a mixture of hydrogen and helium. During the history of our universe, more helium was made because the process that drives the stars turns hydrogen into helium. So what we expect is that everything in the universe should have 23% helium left over from the Big Bang, plus something extra. Now, if we found anything in the universe that had, say, no helium, or much less than 23% helium, that would be very hard to explain, because the processes that we understand in stars can make extra helium but can't turn the helium back into hydrogen. So if we found anything in the universe with less helium than we think was made in the Big Bang, that would be bad news for the Big Bang Theory. So far we haven't.

There are other tests. For example, there are particles called neutrinos, which we think were made in the Big Bang, along with the radiation and the atoms. These particles have a very very tiny mass. If they had a not so tiny mass, then that would be a problem for the Big Bang Theory, because there are huge numbers of these particles, and too large a mass would produce far more than the maximum density which we would be allowed to have. So we could have discovered a mass for neutrinos which was so large that it would have contradicted the Big Bang Theory.

I think it's important to point out that over the thirty years since the Big Bang Theory was first taken seriously, any of these observations could have disproved it, but instead what has happened is that the theory has firmed up in a gratifying way, and the evidence for it is now stronger.

Thank you for finding time to talk to us.

Keep up the good work on Plus!