'A farewell to ice' 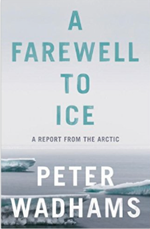 A farewell to ice: A report from the Arctic

Peter Wadhams has been to the Arctic over 40 times, nearly every year since 1970. He is Professor of Ocean Physics at the Centre for Mathematical Sciences in Cambridge. In a scientific career spanning five decades Wadhams has seen the object of his study undergo dramatic changes. In A farewell to ice he shares with readers in a largely non-technical style, yet with many scientific explanations, references, and data, the view of a sea-ice expert on the current status and the future of Arctic sea ice. The fate of ice is inevitably intertwined with that of life on Earth.

The book starts gently. In chapter 2 we are introduced to ice, "the magic crystal". Wadhams neatly describes some of the myriad ways in which the water-ice pair differs from most other common solids and liquids. He talks of different mechanisms of sea ice formation, that lead to rather different kinds of sea ice, ranging from what is called pancake ice, to the most important kind, multi-year ice. The tender affection the scientist has for sea ice is palpable even through his simple and lucid style of writing.

After explaining the mechanisms by which Arctic sea ice effects global climate, the main theme of the book unfolds in full in chapter 5, starting with the greenhouse effect. Chapters 6 and 7 discuss respectively how yearly sea ice data points to an undeniable "Arctic death spiral", and the accelerating effects of positive feedbacks within the Arctic system. This forms the core of the book, elaborating why we are nearing a stage where we must bid farewell to sea ice. The most terrifying feature of this "Arctic amplification" is aptly stated by Wadhams: "We are not far from the moment when the feedbacks will themselves be driving the change — that is, we will not need to add more CO2 to the atmosphere at all, but we will get the warming anyway."

Allowing myself one exaggeration to drive home the urgency, in view of what might be in store for climate in the future, what we're seeing right now is just a warning, not a warming!

The book goes further than just reporting on the state of the Arctic. Wadhams enters into impassioned descriptions of the political inaction and lack of collective will in tackling the problem of climate change induced by human activity. He laments at one point, "But the unfortunate reality is that the global population, especially in the West, is extraordinarily reluctant to give up the conveniences of living in a fossil fuel world." This is food for thought for all readers: how much longer can we live thinking, "just one more Ryanair flight, and isn't that SUV a good way of getting the children to school?"

Another alarming reality we are told about is the growth of climate change denial organisations. Good science needs critics and sceptics. But these are not scientists disagreeing over mechanisms for climate change. Instead they are parties with enormous wealth and vested interests, especially in the oil industry, usually having nothing to do with science. They seek to sow doubt and coax the world into inaction, misleading people for their own short term monetary gain.

In the last two chapters, Wadhams rallies all the foregoing discussion of sea ice, climatic patterns, and the mechanisms that might link them, to discuss the global climatic effects we can expect in the future, and the economic and human spinoffs of these potentially catastrophic changes. He proposes an integrated arctic science to bring together scientists, policymakers and economists.

Coming at a time when Arctic sea ice has thinned by over 75% and its extent in area diminished to record lows, this book offers a first-hand insight into the world of Arctic science. Mathematics is, of course, an essential component of this science, and the book points towards its applications in this area. The wealth of scientific data and references add significantly to the genre of climate science books. Wadhams describes in an accessible way things that are not normally presented to the lay person, be it the discussion of multi-year ice, the thermohaline circulation, or hot research topics like chimneys and methane plumes.

The target audience for this book is broad. The content is primed for the lay reader, but with enough detail to keep those acquainted with science alert as well. The material is well organised, and the theme of melting ice is constantly reiterated in every chapter, each time viewed through the lens of a different phenomenon. The chapter titles offer crisp glimpses of the content.

Wadhams has previously been labelled an "alarmist" by climate change deniers: a blanket term they use for outspoken scientists and environmentalists alike. However, in presenting the story through empirical observations and discussing different hypotheses that try to explain these, he succeeds in making a detailed and convincing argument that climate change is very real, and a very urgent problem facing humanity.

There is reasonable evidence to believe that a molecule of CO2 stays active in the climate system for almost 100 years. Wadhams' view that carbon drawdown is the only way to rein in climate change certainly makes sense, seeing as precaution is better than cure. Stressing the need for action at the level of nations and governments, he quotes the late David MacKay, former chief scientific adviser to UK Govt. on Energy and Climate, who exclaimed, "If everyone does a little, we will achieve only a little".

Happily, the book has very few noticeable shortcomings. There could have been a few more sentences on the ecological havoc being wrought by the loss of Arctic ice, especially the habitat loss for such representative species as the polar bear. A curious unconscious bias of the author might be inferred at some places : he frequently implicates Russia and "developing countries" (China and India for their fossil fuel usage, reference to a predicted quadrupling of population in Africa) against the stark backdrop of not once explicitly referring to the role of the industrialised countries and their colonial rule where the problem originally began.

In sum, A farewell to ice is bound to touch the reader. This is a book that I would recommend one and all to read. For an awareness of the issues it discusses and the voice of concern that it raises, a voice of concern that is not represented enough objectively in the media, are potentially crucial for the future of humankind.

Sathyawageeswar Subramanian is a PhD student in Quantum Computing at the Department of Applied Mathematics and Theoretical Physics at the University of Cambridge.