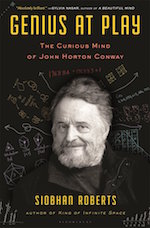 Genius at play: The curious mind of John Horton Conway

I haven't read a biography quite like Siobhan Roberts' biography of John Conway: it feels more like meeting and entering a collaboration with Conway than a biographical account of his life and work. But the experience of being swept along on a wild ride seems appropriate, and Roberts creates a very unusual and human portrayal of one of the great mathematicians alive today.

Conway has been a hero of mine for a long time. I'd (obviously) learned about his work in group theory at university, and I have to admit to being a bit star struck when I first interviewed him back in 2002. It was just as exciting to interview him again, nearly a decade later, in 2011. And in both cases, although I say I interviewed Conway, in reality it was more like sitting back, holding on tight, and enjoying the ride. He spoke non-stop in a great wave of mathematics and philosophy and anecdotes, until he was finished, and he went, and I was left with reams of notes and hours of recordings to try to work into a finished piece.

Those experiences provided a tiny glimpse of what the 7-plus years were like, from 2003 onward, that Siobhan Roberts spent working with Conway on this biography. It certainly seemed more collaborative than I understand the biographer's process to normally be; so much so that Conway was awarded his own font throughout the book to delineate his first-person contributions/interjections. I also imagine it isn't usual for a biographer to be assisting their subject so much in travelling to lectures and other matters, fetching "cough drops and water in attempts to quell his coughing fits" and carrying "around his plastic shopping bag full of lecture props". Roberts' description of part of the experience was one of "a full-immersion participant observer". But this long period of time and intense interaction with her subject has allowed Roberts the opportunity to present Conway as a very human being, with a particularly complex character.

It is also a pleasure to have so much mathematics, and the real meat of the mathematics, woven throughout the text. The book is framed by the development of the Free Will Theorem with Simon Kochen, and the series of public lectures Conway gave to disseminate their work. The lectures were originally planned for 2006, shortly after they published their original paper in Foundations of Physics. But life and illness got in the way, and the lectures were postponed to 2009 – the "present day" of the book.

It is this interweaving of mathematics, life history, Conway's beautiful skill for rendering mind-boggling complexity into the head-slapping obvious, and the thrill of being present during that series of remarkable lectures that exemplify Conway and demonstrate Roberts' skill as a biographer.

The book offers a unique insight into Conway's great mathematical works, as Roberts' is able to provide both Conway's own verbatim opinion and explanation of these ideas, as well as her own perspective standing alongside the reader. I'd been aware of his attempt to gather "all the interesting properties of all the interesting groups... in a comprehensive reference guide" into The ATLAS of Finite Groups, but I really appreciated the chance to sit with Roberts in the Princeton common room as Conway explained what you actually do with The ATLAS. This book, with its famous red cover, consists of tables and tables of information about these mathematical objects. (You can read more about these objects, and the great hunt to find them all in this article.) Conway begins his explanation of the book:

"Here it is, The ATLAS, a book full of numbers. It's hard to explain what character tables are. They tell you numerical facts about the groups; they are the most compendious way to convey information about groups. But The ATLAS is not about numbers. It's about beautifully symmetrical things."

He goes on to give a most evocative explanation of his mathematical senses:

And here Roberts makes the connection from the beauty and technicalities of the mathematics, to the same aspects of art: "As with Chuck Close's pointillist paintings, it's not the dots that matter so much as the over all effect." Mathematics is a highly technical language, from which great artists can create objects of profound beauty.

When I interviewed Conway the second time in 2011, I was struck by the physical change in him. Although his brain, passion and humour seemed as active as ever, the strokes he had suffered had had a marked effect on his body. And this seemed to result in the interview becoming a contemplation of life and mortality. There seems to be little distinction between the worlds of mathematics, emotion and life for him. Indeed this book reveals how maths in some senses saved his life, for example, a deal made with a colleague not to attempt suicide for second time until they'd finished working on a paper together. There are also examples where maths has, although temporarily, healed his physical pain as well, such as when the "analgesic power of thinking hard" enabled him to forget the throbbing pain of a toothache.

Roberts' book is a deep and dense journey through Conway's life and work. It gives a real feel for both his mathematics and his character, warts and all. And for me, it was a wonderful demonstration of the humanity, creativity and passion of mathematics and mathematicians. I would recommend it to anyone prepared to go along for a wild, mathematical ride.

The book is written with great appreciation for Conway in spite of his serial philandering and absolute rejection of all responsibility for his personal affairs. Roberts covers Conway’s suicide attempt. Of course a book about a mathematician will have math in it.

He discovered the Conway groups in mathematical symmetry. His names is in group theory, game theory, knot theory, abstract algebra, geometry and his famous creation of Conway’s Game of Life, a set of rules for propagating a pattern that generates incredible complexity.

The book is well written and at times hilarious. Most of the information comes from the author’s interviews with Conway. I read this as an audiobook downloaded from Audible. Jennifer Van Dyck narrated the book. Van Dyck is a new narrator for me and I was impressed with her ability.