Now you see it, now you don't

Harry Potter had one, and now so do the mathematicians.

In October 2006, a team led by scientists at Duke University demonstrated the first working "invisibility cloak." The cloak deflects microwave beams so they flow around a "hidden" object inside with little distortion, making it appear almost as if nothing were there at all. Now mathematicians from the University of Rochester have explained the mathematics behind the scientific sleight of hand. And their mathematical understanding may even be able to extend the current cloak's powers, enabling it to hide radiating objects like a flashlight or cell phone. 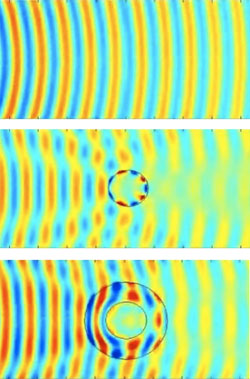 The top image shows the microwaves
passing over an empty plan. The middle
image is shows the disturbance to the
microwaves caused by a metal cylinder.
In the bottom image, the cylinder is placed
in the 'invisibility' cloak, and we can see
that the cloak greatly reduces the distortion,
hiding the object.

Earlier this year, David R. Smith, from Duke University, led a team that used a circular cloaking device to successfully bend microwaves around a copper disk as if the disk were invisible. (You can read more about the cloak in Science, and watch a video of the invisibility cloak in action at Duke University or on YouTube.)

However, mathematicians have known about the invisibility trick since 2003, when Allan Greenleaf, from University of Rochester, and colleagues from around the globe, had first developed the mathematics of invisibility. Moreover, they have now announced a mathematical theory that predicts some strange goings-on inside the cloak — and shows that what happens inside is crucial to the cloak's effectiveness.

"We were working on improving the mathematics behind tumour detection," says Greenleaf. "In the final section to one paper, we spelled out a worst-case scenario where a tumor could be undetectable. We then wrote a couple of additional articles describing when this could happen. At the time, we didn't think further about it because it seemed extremely unlikely that any tumor would be covered with the necessary material to be hidden that way."

This past summer, however, Greenleaf and his colleagues learned about a paper that researchers at Duke University and Imperial College had published in the journal Science, which used nearly identical equations to give a theoretical proposal for a cloaking device. Once Greenleaf and his colleagues saw that their results could also be used to show how to "hide" an object, they decided to analyse and improve the proposed cloaking device, using the techniques they had developed in their earlier work. They knew that a crucial question would be: What was going on inside the cloaked region?

Smith, a physicist, gave a description of why the cloaking device should work. Greenleaf, as a mathematician, knew that to have any hope of extending and improving the cloaking, it was important to fully understand its mathematical underpinnings. Then, in October, Smith published another paper, describing how he and his team actually built a cloaking device. This made it even more crucial to carefully analyze the underlying structure.

Greenleaf and his collaborators used sophisticated mathematics to understand what must be happening inside the cloaked region. Everything seemed fine when they applied the Helmholtz equation, an equation widely used to solve problems involving the propagation of light. But when they used Maxwell's equations, which take the polarization of electromagnetic waves into account, difficulties came to light.

Maxwell's equations said that a simple copper disk like the one Smith used could be cloaked without a problem, but anything that emitted electromagnetic waves — a cell phone, a digital watch, or even a simple electric device like a flashlight — caused the behaviour of the cloaking device to go seriously awry. The mathematics predicts that the size of the electromagnetic fields go to infinity at the surface of the cloaked region, possibly wrecking the invisibility.

Their analysis also revealed another surprise: a person trying to look out of the cloak would effectively be faced with a mirror in every direction. If you can imagine Harry Potter's own invisibility cloak working this way, and Harry turning on his flashlight to see, its light would shine right back at him, no matter where he pointed it.

Greenleaf's team determined that a more complicated phenomenon arises when using Maxwell's equations, leading to a "blow up" (an unexpected infinite behaviour) of the electromagnetic fields. They determined that by inserting conductive linings, whose properties depend on the specific geometry of the cloak, this problem can be resolved. Alternatively, covering both the inside and outside surfaces of the cloaked region with carefully matched materials can also be used to bypass this problem.

"We should also keep in mind that, given the current technology, when we talk about invisibility, we're talking only about being invisible at just a narrow range of wavelengths," says Greenleaf. "For example, an object could be rendered invisible at just a specific wavelength of red; it would be visible in nearly every other colour."

Smith's team at Duke is also working on improving their cloaking device. Smith and Greenleaf met for the first time in early December and talked about Greenleaf's new maths. "Allan has been looking at the problem much more generally, and deriving the conditions for when true invisibility is or is not possible," says Smith. "We are very interested in what he and his colleagues come up with!"

Greenleaf and his co-authors are now working to confirm the relationship between their work and experiments. Some of the equations do not have solutions, so they are looking at what the physical consequences are, and whether a cloak's effectiveness would be compromised. Since any physical construction is only an approximation of the mathematical ideal that Greenleaf's team analyses, Greenleaf says it would also be very interesting to understand the extent to which small errors in the construction degrade the cloaking effect.

The real invisibility cloak built by Smith and his team may not be quite a match for Harry's. But thanks to the maths of Greenleaf and his colleagues, fact might just catch up to fiction yet.