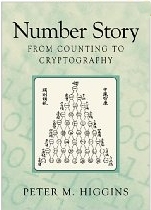 Number story: From counting to cryptography

When Number story first landed on my desk I was struck by its prettiness. With its tasteful and slightly old-fashioned cover design, the unusually compact format for a hardback, and the unassuming title, this book clearly isn't desperate for attention. So I was intrigued to find out whether this quiet confidence is justified by its content, and I'm glad to report that it is.

Number story is a tour through the wide range of mathematical topics opened up by the deceptively simple concept of number. As Higgins points out early on in the book, the simple process of counting already involves a considerable leap into abstraction: separating a number from the things it is counting, rabbits or days, for example, and giving it an existence in its own right. Even the way we write numbers, also explored in the early chapters, is nothing short of a work of genius that took millennia to evolve. Underneath the conventions we adopt when we first learn to count, numbers live an incredibly rich life, and you don't have to be a mathematician to explore and enjoy it.

The first four chapters of the book explore the counting numbers 1, 2, 3, ... , known to mathematicians as the natural numbers. Higgins starts out by finding patterns within even the most innocuous looking representatives of this class. The number 6, for example, is a triangle formed by one dot sitting on top of two dots, sitting on top of three dots. It's also a rectangle, formed by two lines of three dots (or three lines of two dots, whichever you prefer). Six is also a perfect number, because it is equal to the sum of all its divisors: 1+2+3=6. Furthermore, it is the exact number of kisses that happen when three people meet and everyone kisses the other two. All these observations collude to give 6 its very own unique personality, and, as Higgins convincingly assures us, all other numbers have one too, even though some don't wear it on their sleeve. Higgins quotes the mathematician Ramanujan, who on being told by his colleague Hardy that the number 1729 was boring, replied that it wasn't at all, since it is the smallest number that is the sum of two cubes in two distinct ways. This anecdote is one of the many historical snippets that permeate the book to great effect, though why in this particular instance Higgins's reference to Ramanujan as "the little Indian genius" nearly made me go off the book.

The simple number facts explored in the beginning of the book are much more than just harmless fun (though the playful aspect is taken care of in a chapter three, which presents some number tricks). It's the symmetries and patterns formed by numbers that have inspired pure mathematicians ever since the time of Pythagoras, and it's they that provide the transition from simple arithmetic born from practical need to real mathematics, a fact that emerges beautifully from Higgins's narrative. Once you have noticed that all numbers are different, it's natural to ask for similarities, and in chapters three and four Higgins goes on to explore several interesting families of natural numbers. Pascal's triangle, the Fibonacci numbers, and of course the mighty primes all make an appearance. Higgins shows us that even though we may pride ourselves with being the inventors of these number concepts, we're by no means their master. Each family comes with its very own characteristics, sometimes awkward ones, and some of the simplest questions arising from them are still unanswered today. Within a few pages Higgins has taken us from the distant beginnings of mathematics into the heart of modern mathematical research.

The smooth transition from simple arithmetic to deep mathematics is the real strength of this book. After exploring the natural numbers, Higgins looks at ratios, fractions, odds and averages, and has us experimenting with negative numbers. Soon we're back to the ancient Greeks and their terrifying discovery that the natural numbers and their ratios are far from sufficient to describe the world. There may be infinitely many of them, but there's an even greater infinity of numbers that cannot be expressed by fractions. This begs the question of how one infinite collection can be bigger than another, and chapter seven sees us grappling with concepts involving infinity, including Hilbert's infinite hotel and Cantor's work on cardinal numbers. A later chapter, aptly entitled The number line under the microscope, looks at the infinitely divisible, exploring continued fractions and Cantor's mysterious middle thirds set.

Infinity is a mind-bending concept, but so is chance. No book on numbers would be complete without an exploration of probability theory, and Higgins gives it its due with a chapter containing a range of counter-intuitive examples, problems and paradoxes. We stay in the realm of the seemingly absurd with a section on algebra, which describes how symbolic formulae for the solutions of equations sometimes come up with nonsensical results involving square roots of negative numbers. The narrative shows how over time, mathematicians begrudgingly admitted these so-called imaginary numbers to the number universe. Higgins devotes two chapters to this development, complete with a geometric interpretation of complex numbers and glimpses of what lies beyond in higher dimensions.

Number theory is a branch of pure mathematics and the book presents its ideas in this spirit, with only the last chapter on cryptography devoted entirely to applications. What comes through beautifully is that mathematics is a journey of discovery, rather than invention. Higgins shows that mathematical structures aren't the grey and boring figments of an accountant's imagination, but curious, colourful and often awkward beasts — we may not be able to tame them, but anyone with a curious mind will at least want to try and understand them. This book enables anyone who is willing to think to take part in this journey of discovery, and you don't need much mathematical knowledge to enjoy the ride. (Though for more advanced readers, there is a final chapter with more mathematical detail.) There are plenty of historical snippets to help you over the slightly harder bits, and the realisation that even simple questions can lie right at the heart of modern mathematics adds to the suspense. Whether you read this book in one go, or dip in and out, you will come away with some fascinating insights into the very large and very lively world of numbers.