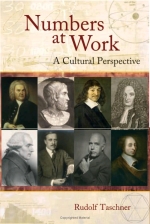 Numbers at work: A cultural perspective

It turns out your mum was wrong after all: you can judge a book by its cover. This book has a colourful, detailed, and tantalising cover adorned with portraits of people you may or may not know. Who are they, and what do they have to do with numbers at work, and the culture in which we live? But do not judge the book by its plain title and subtitle. While it is true that Numbers at Work deals with the importance and role of numbers in our lives, and while their cultural aspect is central, a more accurate title would be Wow, isn't maths amazing, fascinating, mysterious, and fun? perhaps with the subtitle In full technicolour!

In eight chapters Taschner unpicks the thread of mathematics running through the cultural and scientific lives of ourselves and our forebears, and he does so on glossy pages resplendent with full colour photographs, reproductions of paintings, and the occasional mathematical diagram. Closing the book, I was left with the impression that asking the question "what is mathematics?" is a bit like a fish asking, "what is water?" In our everyday lives we swim unknowingly through a vast and clear realm of great subtlety and power, and we do so quite blindly, ignoring the profound connections between the different areas of mathematics, and between mathematics and the other great cultural joys of life: painting, music, politics, religion, and more besides.

If the book has one main message, it is that numbers and logic underlie much of what we humans find interesting. Numbers can be found "at work" in the rhyme and metre of poetry and in the misery and elation of the roulette table, in the structure of our musical scales and the power of our greatest paintings. Yet Taschner is careful not to argue for a miserly reduction of our complex world to mere numbers. Although he describes a numerical, geometrical, or logical order behind our workaday world, he maintains that ethics, aesthetics, poetics, and politics are more than the sum of the numbers which lie under them, and should be discussed in their own languages.

Although we are invited to witness numbers working behind our world, the book is by no means only about "applied" mathematics. Taschner uses his wide scholarship and breadth of examples to draw the reader into considering the very nature of this thing called mathematics, why we do it, and where it sits in relation to a broader cultural history of the world. His discussions vary from the incredibly detailed to the ramblingly broad, often, paradoxically, at the same time.

The second chapter is a good example of how detailed the book can be, while yet maintaining the links between mathematics and a broader cultural world. Like all chapters, this one has a hero, a central figure who motivates the discussion. In this case, our hero is Johann Sebastian Bach, the great 18th century composer, who, Taschner informs us, often "signed" his works with variations on the four notes B, A, C, and B# (H in German). Bach is placed in a context of Leibniz and Luther, the enlightenment and the reformation. Did Leibniz's De Arte Combinatoria (On the Art of Combination), published when Leibniz was 20, 19 years before Bach's birth, influence Bach's signature notes? Does his copy of Luther's German translation of the bible, in which Bach underlined all passages referring to numbers, indicate a fascination with mathematics, order, and a compass-wielding god?

If that seems broad to you, the chapter has barely got going. It covers all sorts of numerology and symbolism before getting down to the detailed nitty-gritty of how to tune a piano. Here we see sine waves, tuning forks, fundamental frequencies and overtones, and many illustrated pages on ratios of one note to another and how to reconstruct (almost) a scale on a piano. Fascinating stuff, and who would have thought that tuning a piano involves rotoids connecting the 12 notes of the chromatic scale along the circle of fifths, circling the surface of a torus three times in doing so?

The heroes of the other chapters — heroines taking more minor, but still prominent, roles — are Hofmannsthal (a poet), Descartes, Leibniz, Laplace, Bohr (a physicist), Pascal, and Pythagoras, with whom the book begins. Ah yes, Pythagoras of Samos: so much starts with him. The book quotes him as saying that numbers are the key to all knowledge. Taschner continues, "He believed that they underlie the whole cosmos and all that is in it, our very selves and all that goes to make us what we are. Nothing exists that cannot be expressed as numbers." By asking the question of how Pythagoras may have come to this conclusion, Taschner takes us on an exciting journey through ancient thought, not only about mathematics, but also about the comprehensibility of the universe and the basis of understanding. This chapter is subtitled Number and Symbol and strikes to the heart of several key philosophical questions, including the puzzle of where maths comes from, and why we bother to do it. Pythagoras appears to have believed in what we would now call Platonism, the opinion that numbers and other mathematical objects have an existence independent of the human mind, and that mathematicians discover these objects as they explore the mathematical universe with their minds. To Pythagoras, we bother to do mathematics because it is beautiful and because it is actually the basis of everything else we see around us, fundamental to the entire human universe. Other thinkers emphasised the practicality and utility of mathematics and believed instead that mathematics was created, a product purely of human minds. We do it because it is beautiful and useful.

The debate rages on to this day, but rather than getting bogged down in its fascinating minutiae (though they crop up from time to time in the book) Taschner forges on with a remarkable account of the symbolism of numbers. Many ancient cultures, building on a Pythagorean belief in the fundamental nature of number, attributed complex and esoteric meanings to numbers themselves. Taschner's description of the numerology in the Hebrew bible is truly mind-opening. To the ancient Hebrews, as with the Greeks, letters represented numbers too, so that the name Eliezer, for example, could also represent the number 318. Abraham and his many servants pursue Lot in one story, and these many servants are reduced to just one. How many? 318. Which servant? Eliezer. Perhaps there is something to a search for hidden codes in the bible after all, since it seems that the Hebrew scribes were not only deeply immersed in their own numerology, but actively sculpted their narrative and choice of words to encode esoteric and "divine" meanings into passages which in English seem merely dull.

Numbers and time, numbers and space, numbers and logic, numbers and politics, numbers and matter, and numbers and spirit flesh out the remainder of the book, each page drenched with knowledge and beautiful figures. The notes section is extensive, with the only "drawback" being that yet more avenues are opened by it. Indeed, although the book can enjoyably be read by itself, so many tantalising hints and comments are made that one is always tempted to put it down and pick up several others to explore the wonderfully interconnected cultural world the book reveals, a world with a beating heart of mathematics.