Have you ever noticed what happens when you spin a coin on a table? As the coin starts to fall over and roll on its edge, its spin gets faster and faster until it suddenly stops altogether.

This behaviour has posed a longstanding puzzle for mathematicians and physicists. However, Professor Keith Moffatt from the Isaac Newton Institute has come up with a new model that may both explain the spinning coin, and have implications for fields as diverse as aircraft design and meteorology. 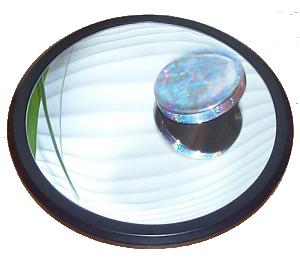 An example of Euler's disk in motion.

Rather than an actual coin, Professor Moffatt used a heavy spinning disk known as Euler's disk as his model. He showed that a thin layer of air between the disk (or coin) and the table is responsible for the accelerating spin. As the disk tips over and begins to settle, it loses energy. However, rather than slowing down it actually speeds up as the energy dissipates.

Theoretically, the disk should spin faster and faster as its energy decreases. Eventually, it would spin infinitely fast as it reached an infinite point known as a singularity.

However, in practice singularities are not known to exist anywhere in our universe except inside black holes. Instead of spinning forever, the disk will suddenly halt.

"The key to it is internal friction in the air. We call it viscosity," said Professor Moffat. "In that final stage as the disc is vibrating above the table, there is a thin cushion of air trapped in there. That's why there is a lot of dissipation of energy and it suddenly stops."

In a paper in the journal Nature, Professor Moffat describes the spinning disk effect as a "finite-time singularity". He believes that his research may be useful in studying turbulence, where finite-time singularities may also occur. Improvements in our understanding of turbulence could help us with a number of tasks, including building better-performing aircraft and more accurately predicting the weather.

"There is a lot of numerical evidence from very high-powered computation that certain quantities become infinite. This is why there is a great deal of interest in this phenomenon in the turbulence community.

"Any fundamental new understanding of turbulence would help improve the predictability of systems. This applies not only to aerodynamics and aircraft design, but also to atmospheric dynamics and weather forecasting."