There may be plenty of other fish in the sea, but did you know that there are also millions of different bacterial species? And not just in the sea, but in the dirt of our very own backyards, and in sewage systems where they break down waste. Exactly how many different species of bacteria live in these environments has always puzzled scientists - there are far too many to count and researchers have only managed to study and classify a mere fraction of them. But using some modern statistical techniques, researcher Tom Curtis from the University of Newcastle, and his colleagues, have managed to estimate the diversity of the bacteria kingdom for the first time. 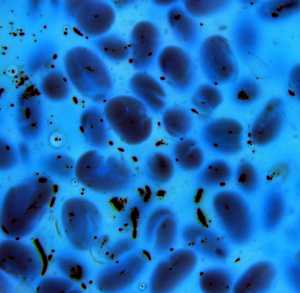 Too small to count them all. Image from www.freeimages.co.uk

In a recent article in the Proceedings of the National Academy of Sciences, Curtis and his colleagues recognised that "simply counting species is an essentially endless task". So instead they developed a new method of estimating the diversity in an environment using two more easily measurable variables: the total number of individual bacteria present in a small sample (NT), and the population size of the most predominant species (NMAX).

"The smaller the proportion of the individuals taken up by the most abundant thing, the more uncounted things there are," Curtis said. "It's quite straightforward really."

For example, if the predominant species account for a quarter of the individuals in a sample (and assuming that there is only ever one species with the maximum population size), then there would have to be at least four other species present. This is because if there were only three, then one of them would take up at least 25% of the sample, meaning that the first species wasn't the most abundant after all. If the predominant species contained only 1% of the sample, then there would need to be over 99 other species. The smaller the proportion the predominant species represents of the whole community, the more diversity there must be.

Using the statistical distribution of the number of species there were for each population size, the researchers could estimate the bacterial diversity of samples from NT / NMAX. They estimate a typical sample of sea water contains 160 species per millilitre, while a gram of soil from your backyard could hold 6,300 species. Extrapolating to a larger scale, they estimate that the entire ocean could contain just 2 million species of bacteria while a mere tonne of garden soil might contain twice that.

You might wonder just who really cares how many different types there are of these tiny bacteria. But Curtis and many other scientists care, as a better understanding of the diversity of the bacterial kingdom could lead to many benefits - including more effective sewage treatment. The more diverse the bacterial community is in a sewage works, the more pollutants it may be able to clean up. They estimate that the working components of a current sewage system - the evocatively named "activated sludge" - holds 70 species of bacteria per millilitre, and a whole treatment plant may hold 500 species.

So next time you swim in the ocean, dig in the garden or flush the toilet you can appreciate the truly diverse world we live in - including all creatures great and small.