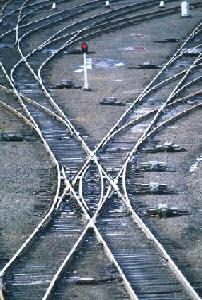 Maths down the tubes

The arguments over how London's underground Tube network should be run continue to rumble on. On one side, the Government believes that it should be run by a Public Private Partnership (PPP), whereby three private-sector firms would split up the various tube lines between them. These firms would be required to keep the lines operational while carrying out major improvements and modernisation, in return for large grants and a share of the public's fares (which would have to go up). The other side of the argument is championed by the London Mayor, Ken Livingstone, and his Transport Commissioner Bob Kiley (imported from the US, where he is credited with having turned around the New York subway system). They argue that the Tube network should remain publicly controlled for a variety of reasons, including safety issues, the risk of handing over control of track to private companies (witness the difficulties which Railtrack has faced) and the feeling that Londoners would not want companies to make considerable profits from a public transport system.

Mr Kiley has argued particularly strongly against the proposed PPP contracts, which run to almost 2 million words spread across 2800 pages in 135 different documents, containing specific targets to be met and rules for calculating whether they have been, expressed as mathematical formulae. He feels that the complexity of these contracts will distract companies from the most important task of getting the work done on time and within budget.

Plus does not want to express an opinion about which option is best. That is almost entirely a political decision, driven by considerations of whether the public or private sectors can perform better and who, if anyone, should be making a profit. However, Plus does have strong views about one of Mr Kiley's complaints, which is that it is dangerous to put too much reliance on "hundreds of complex formulas". It is true that we should not lose sight of the wood for the trees, which could happen if we got bogged down in the minute details of the formulae and didn't stop to look at the bigger picture of overall budgets and timescales. But measuring performance using formulae is much more reliable than using other, more simplistic measurements of "success": the NHS has already discovered what happens when you use over-simplistic measurements such as "the length of the waiting list". (Hospital managers just created new lists which you had to get to the top of before you could be moved onto the waiting list, thereby creating a waiting list for the waiting list.) Instead, a formula can incorporate and measure several different aspects of the same problem and give a more balanced view of success or failure than a simple percentage could.

It is hard to avoid suspecting that the real reason that Mr Kiley doesn't like the formulae is that he doesn't understand them or is simply scared of them! He says of the mathematical model which has been developed for the Underground that "very complex is an understatement". For instance, he is unhappy with the following extract from the model:

These formulae might look scary at first glance, but sit down for a moment or two and it makes sense: it's just a way of calculating the penalty which a private company should suffer for defects and failures on its section of track. Some sixth-formers even sat down to look at a few of the formulae, having been told that they were very complex, and had no trouble untangling them.

One of the aims of Plus (and indeed of our parent organisation, the Millennium Mathematics Project) is to allow people who might not be mathematically-inclined themselves to understand nevertheless that maths can be useful and even beautiful (admittedly not beautiful in this case!) without being threatening. It allows us to express complicated ideas in rather compact and simple formulae, and is the perfect tool for laying down measurements of performance.

But while we disagree with Mr Kiley about whether formulae should be used or not, we must agree with him that 2 million words is rather excessive for a contract. Who could possibly spend enough time reading it? Maybe it's the lawyers, rather than the mathematicians, who need to simplify.