I am the first person to admit I don't have an artistic bone in my body. In fact I find it difficult to think visually at all, let alone imagining shapes and structures in three dimensions. Therefore it was with some trepidation that I opened this book, Origami polyhedra design, by John Montroll. 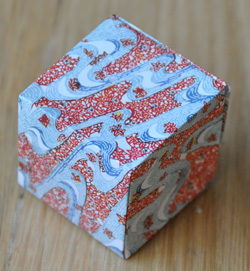 Montroll's book not only gives instructions on how to fold polyhedra, but also explains in some detail the technical process of how he created these origami designs. This was my first surprise: origami experts have to work out how to fold their creations? I had always assumed that the designs appeared fully formed in their heads, a gift from the origami gods or some origami muse. But no, they have to figure it out for themselves, and maths forms an important part of this process.

In fact, the way Montroll describes it, his process of creating an origami design is very similar to writing a mathematical proof. You have a final statement you wish to show is true (a final polyhedron you wish to fold), and you have to figure out how to arrive there given your particular axioms. For Montroll these axioms are: the model must be folded from a single uncut square piece of paper; the faces should have no lines or creases (or as few as possible); the model should hold its shape and be as large as possible; the folding structure should maximise symmetry and be as simple as possible; and the model must be created by folding alone, without the use of a ruler or protractor. 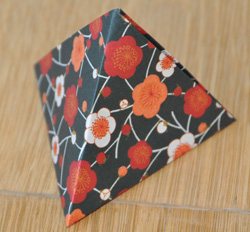 As Montroll explains his design process it is like a magician revealing the secret of his tricks. But these insights only made the trick seem more wonderful; creating origami designs is not due to magic or even sleight of hand, but intellectual hard work (and obviously a fair whack of artistry and craftsmanship too). And Montroll doesn't hold anything back, encouraging and equipping origami enthusiasts and enthusiastic mathematical thinkers to play and create designs of their own.

Along the way Montroll introduces the reader to many different types of polyhedra, including some I had not heard of before, such as the Archimedean and Catalan solids. He discusses the relationships between different types of polyhedra such as dual pairs, where the vertices of one polyhedron are swapped for faces to create another polyhedron (e.g. the cube is the dual of the octahedron and visa verse). The connections between polyhedra is further emphasised by generalised folding methods for groups of similar polyhedra, such as dipyramids, antiprisms, and cube-related polyhedra. There is also a continued discussion of symmetry, as it plays a vital role both in understanding the polyhedra themselves, and also creating the best flat layout of the model on the paper.

Once the flat layout had been decided, mathematics is used to calculate certain folding "landmarks" that were necessary to create the model. Ingenious folding methods determine particular lengths or mark out specific angles, and Montroll provides clear explanations of these methods using algebra and trigonometry. For someone with little visual sense like myself (I never believe pictorial proofs, I always need to see the equations to be convinced) is was wonderful to see these 'tricks' become as convincing as mathematical proofs. 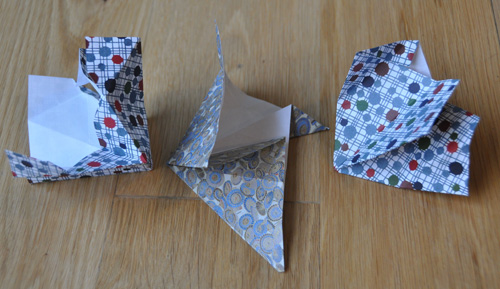 After his explanation of the design process, including examples of this process for specific models, the rest of the book contains instructions for folding many different polyhedra. Many of these designs are very complex and too difficult for a "casual folder" such as myself (as you can see by my false starts above), but it was very satisfying to fold some of the simpler models. I imagine experienced origamists would enjoy folding these beautiful shapes, and would no doubt find techniques and beautiful geometric forms that would inspire them in their own origami designs. And for lovers of mathematics, this book unfolds the mystery of origami and the incredible skill and artistry involved designing origami polyhedra, allowing you to explore familiar forms in a new way. 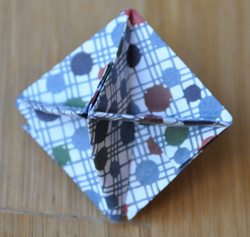 ...and the finished sunken octahedron!

Reading this book and attempting to fold some of these polyhedra certainly gave me a new appreciation of geometric objects I have known for many years. I knew their names, understood the formulae, and had seen or held models of them — I had even created many of these polyhedra using paper nets as a student. But seeing their mathematical construction realised in origami revealed them in a new way. It made me appreciate their geometric beauty and the powerful magic that is mathematics.