The symbol u stands for the fluid velocity. The other symbols, in order, stand for the pressure, p, the density, rho (the Greek letter in the denominator), the acceleration due to gravity, g, and the height, h, of some particle of fluid above some given reference level (such as sea level).

The equation applies only to fluids in steady flow along a single path followed by a particle of fluid. In steady flow, such a path is called a streamline. At any point on the streamline, you can add up the three quantities on the left of the Bernoulli equation. The equation says that if you do that for any two points on the same streamline, then the two answers will be the same.

Here is a simple experiment for testing Bernoulli's equation that you can do yourself. 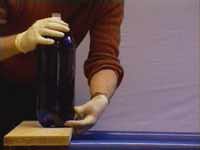 Take a large empty plastic bottle with its lid removed, and make a hole in its side near the bottom of the bottle. Make the edges of the hole as smooth as possible. Put a finger over the hole and fill the container with water. We used a blue dye to make the water easier to see in the pictures but you could use a few drops of food colouring instead. When you take your finger off the hole, the water will emerge in a jet.

Diagram of the bottle with the hole and streamline marked.

Now think about the streamline that runs back from the hole to the top surface of the water. For a general point on this streamline we can define h to be the vertical height above the hole. Once you take your finger off the hole the pressure at the jet and the top surface become approximately equal to atmospheric pressure so we can treat p as a constant. We assume that the water is incompressible and so treat rho as a constant too. Recall that the left hand side of the Bernoulli equation adds up to a quantity that is constant all the way along the streamline. So, we can write the equation for points on this streamline as follows:

k is a constant which now includes the pressure/density term of the original equation.

If the surface of the water is at height h=H then, assuming that the velocity at the surface is very small it can be set to zero for the purposes of this calculation.

The jet of water is at height h=0 so its velocity, U is given by:

In other words, the equation predicts the velocity U of the jet to be equal to the square root of 2gH.

In practice, measuring the velocity of the jet is difficult so we'll measure it indirectly by tabulating the height of the water in our bottle, H, against the elapsed time t. Observe that the rate at which H changes is proportional to the speed at which water is leaving the bottle: in other words, the velocity of the jet. Note that this velocity is not constant; we expect it to change as h changes. We used a video camera to take our readings but with a sufficiently small hole a stopwatch would have done perfectly well. 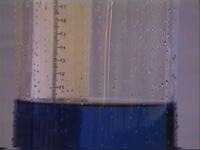 Question 1: What other reason can you think of for making the hole small? (Answer.)

We can use the calculus to show that H is related to t by a quadratic equation (see box). The graph above shows our data plotted on a graph of H against t with a suitable parabola fitted to it (using an approximation method called least squares). It checks fairly well because the flow in this experiment is approximately frictionless and approximately steady most of the time. So the Bernoulli equation should apply to a good approximation.

Question 2: Given that our bottle had a circular cross-section with diameter 12 cm what was the approximate diameter of our hole, assuming it was also circular? Hint: calculate the value of lambda. (Answer.)

Now imagine that our bottle is 80 metres tall. How fast would the water emerge? Let us calculate the square root of 2gH (remembering that g is about 10 metres per second per second).

The answer is about 40 metres per second, nearly a hundred miles per hour! If you turn on a cold tap in your house, the streamline from the surface of the water company's reservoir or water tower might well be 80 metres or more above the tap. But the water does not come out at 100 miles per hour. It would be dangerous if it did! Luckily, there is lots of friction in the household plumbing system. The friction slows the water down, and the Bernoulli equation no longer applies. The large friction is associated with turbulent flow in the pipes. 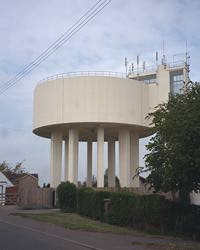 The surface of a water company's water tower might well be 80 metres or more above a tap. 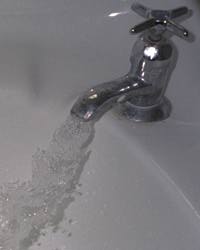 Water may come from the cold tap at speed, but friction in the pipes slows it down.

Question 1: We actually assume that the velocity of the water at the surface is negligible. If the hole is too big then the water level in the bottle would fall too quickly and this assumption will no longer be valid.