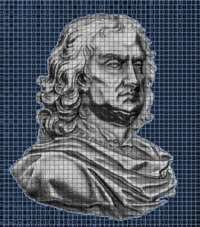 A semi-staged presentation of the text, directed by Andy Jordan, performed at the Royal Institution, London.

Despite its title, Carl Djerassi's latest play, Calculus, is more like a lesson in history or even psychology than one in mathematics. This is because Djerassi's intention was to explore the moral calculus that was involved in the discovery of the mathematical technique, rather than the technique itself. So although you may not come out of this play any wiser about the intricacies of mathematics, you should gain some insight into a scandal that involved some of the great names of seventeenth century mathematics, and their very human flaws.

Today it is accepted that Newton and Leibniz independently developed calculus - Newton in the 1660's, but his secretive nature meaning that Leibniz published his work first in 1677. The two mathematicians engaged in a fierce "priority struggle" to determine who deserved the title of inventor of the calculus. Djerassi's play concentrates on the peak of this struggle, when in 1712 the Royal Society, of which Newton was President, convened a committee to decide the matter of who was first. Not surprisingly, the committee found in favour of Newton, and this play revolves around the members of this committee as they wrestle with the mathematical and political issues involved.

The big names in this struggle - Newton, Leibniz and Bernoulli - do not appear in the main body of the play. They are not involved in the central action and instead occasionally appear as flashbacks when other characters make reference to them. This was Djerassi's deliberate decision - he said that in an earlier version of the play they did not appear at all. Instead, the play revolves around two playwrights from the time, Colley Cibber and Sir John Vanbrugh, as they write a play about the Newton-Leibniz priority struggle. Cibber and Vanbrugh examine the motivations and reactions of the lesser-known members of the Royal Society committee to the pressure they were put under by Newton.

The technique of using a play within the play gives Djerassi many advantages when writing about such intellectual material. It allows contemporaries of the mathematical community to analyse events and gossip about the people involved. It also provides a clever method for presenting the detailed facts (and sometimes a few too many of these) to the audience as one playwright explains the situation to the other.

Framing the play through the relationship of the two playwrights also effectively contrasts the collaborative relationship between Cibber and Vanbrugh with the ultimately competitive one between Newton and Leibniz. Early on we discover that after Cibber's success with the play Love's Last Shift, Vanbrugh jumped on the bandwagon by writing a highly successful sequel, The Relapse. But rather than being angry with Vanbrugh, Cibber tells him that "the theatre is big enough for both of us". In fact, after Vanbrugh's death Cibber completed his late collaborator's last play. This example of competitors cooperating and the success it brought both of them is in direct contrast to the fierce battle waged between Newton and Leibniz.

The plays (both Calculus and the play within it) focus on the politics behind the committee and the pressure the committee members were put under by Newton. Newton is shown as an imposing figure wielding great power over the intellectual community: "He will spit on you and then convince you it is raining" the wife of one committee member exclaims.

This episode in the history of mathematics shows that petty human emotions have as much a place in the esoteric halls of mathematics as they do in everday life. By exploring the personal politics and human flaws of the esteemed fellows of the Royal Society, we see that just like any of us today they ultimately put looking after number one before most ideals and principles.

However, it is Newton who comes most tarnished out of this play. He is shown as a manipulative bully with little regard for his fellow scientists. When a character finally defends Newton at the end of the play, it is only for the sake of history: "What point is there in showing the greatest natural philosopher is flawed like any other human?". The final scene does feel a little like the Agatha Christie detective explaining the murder to the gathered suspects in the sitting room, but the plot twist ties in nicely with theme of revenge and the background manipulations that occur at all levels in the proceedings.

You may not come to this play to learn about Calculus, but its mathematical presence is always there. Djerassi has characters occasionally using mathematical terminology to allude to human actions or emotions. The play also gives an idea of life in the early 18th century in all its facets - sexuality, financial gambles and investments, alchemy, marriage and the place of women in society. The dialogue is also evocative of the time - the "thrust and counter thrust" of conversation in the salons as the characters try to use wit and repartee to improve their position - and this adds to the combative atmosphere of the intellectual struggle depicted.

And Calculus is a very intellectual play. There is little room to let your mind wander or even pause to digest what you have heard. In its current version the play is packed with information - rarely is a sentence spoken without including a date, mathematical concept or historical fact. As one audience member noted, there is no redundancy in the text and you have to listen acutely to every word. Djerassi countered this by saying he has no problem with being called didactic. His intention is for people to learn from his plays but he does understand that there has to be a balance. It doesn't appear that he has the balance quite right yet and he may have to sacrifice some of the knowledge for the sake of good theatre.

Also, for the sake of theatre, there could be more emphasis on the raw emotional nature of the material. The central issues are intellectual ones, but the participants are motivated by greed and revenge. A few blazing arguments could help the audience to form an emotional connection with the characters rather than just witnessing the action. However, this lack of connection could have been an artefact of seeing only a semistaged version of the play.

It was fascinating to see the play as a work in progress and to have the opportunity to hear the Djerassi's own thoughts on it. A full production of the play should be staged next year in London, and it will be interesting to see how the fully staged final version will have changed. No doubt it will retain the moments of excellent, highbrow humour that are part of what makes Calculus so different from a historian's view, providing an insight into the people involved. One memorable moment is when Cibber explains the why sex is like mathematics - both can lead to productive results but that is not foremost in the mind of the practitioners - pursuit of pleasure is the immediate aim!