'How to take a penalty' 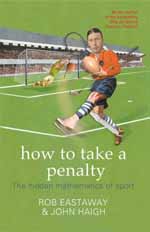 How to take a penalty: the mathematical curiosities of sport

Have you ever wondered what shape a football is? No, it is not a sphere - it is far closer to something called a truncated icosahedron, also known as a "buckyball". It consists of 12 black pentagons and 20 white hexagons and is about the most effective way of creating something nearly spherical out of flat panels. Curious sporting-related mathematical facts like this can be found throughout Eastaway and Haigh's book "How to take a penalty, the hidden mathematics of sport". As its name suggests, this book is about the mathematics hidden within the world of sport. It is not about any one sport in particular; actually many are discussed.

The book is an engaging read and contains many interesting facts about sports, such as why the number of players in a football team is 11 (apparently this originates from the fact that a cricket team has this number, although the reason as to why this is so is more mysterious). It must be emphasised though, that this book is not just a collection of facts. It shows how players of a game can benefit from a well thought-out strategy, the use of basic logic and probability theory. In fact, a lot of the mathematical analysis, which is relegated to an appendix, consists of basic probability. This is presented in a way that is accessible to a GCSE student.

Although the calculations involved are often basic, their results can be far from intuitive. For example, the best serving strategy in tennis is a risky fast first serve and slow and safe second serve. In darts, if one wants to win two consecutive legs (a leg is won by the first to score 501 points) it is best to opt to throw second for the first leg, despite the fact that you are less likely to win the leg if you do so.

The book also contains a little puzzle in each chapter, complete with solution.

As the authors point out, the initial plan was to divide the book up according to the various types of sports, subjecting each to a mathematical analysis. It soon transpired, however, that many issues, such as the winning of the toss of the coin before a game, or "subjective scoring", are common to many different types of sports. These, sometimes unexpected, similarities led the authors to adopt a more unified approach. The book has thus been divided into chapters which treat these common phenomena and skip between the different sports. Although it is hard to see how this could be avoided without duplicating material, the style, while generally very natural and colloquial, does sometimes suffer from these constant changes.

This book is packed with information, so much so that one would certainly benefit from a second read. At the same time, though, it is not too intense. In short, it is a collection of nice examples of how you can employ mathematical reasoning in everyday situations (such as sport) to improve your position and chances of winning.

James Lucietti has recently submitted his PhD thesis in String Theory at the University of Cambridge.
Tweets by plusmathsorg