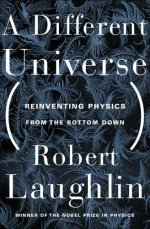 Cartoons can help to bring down governments, but can they help to revolutionise science? This seems to be the hope of Robert Laughlin, whose book on the exciting field of emergence is littered with his hand-drawn cartoons. His Nobel Prize in physics has given him the confidence to share his art and to hope that his cartoons help to explain how science can be revolutionised, or "re-invented". But what is this Different Universe, to what extent is it a reinvention, and how well does Laughlin set out his case?

The standard view of science is one of reduction, which is something understood by scientists and known by five-year-old children everywhere. Scientists seek to replace things and explanations of things by ever simpler things and explanations. Five-year-old children ask a simple question and then ask "Why?" in response to every nested answer one gives, until one finds oneself trying to use 11-dimensional M-branes to answer "Why is the sky blue?". But science is like an ice-cream sundae: one can't expect to keep munching away at explanations, getting deeper and deeper down, without eventually hitting the bottom of the glass, or rather, some simplest possible explanation, the Theory of Everything, or ToE (this is a poor name, because a Theory of Everything wouldn't explain everything, it will just provide a starting point for every explanation).

Here "simplest" means "most fundamental", because a ToE is unlikely to be simple in the strict meaning of the word. Some scientists thinking about ToEs imagine miniscule "strings of energy", whatever they may be, which vibrate in more dimensions than we can see (because the extra dimensions are rolled up so small we can't see them, duh). They use hideously complex mathematics to describe theories which make almost no measurable predictions and indeed say nothing useful about the universe, other than that humans like to show off how clever they think they are.

Such theories are useless, Laughlin contends, because the important things in life are emergent phenomena, which arise not because of a long chain of reasoning connecting simple laws and simple things, but because lots of simple things interacting in simple ways somehow creates complex behaviour. Why do football crowds suddenly start singing in unison? Why does water suddenly freeze into ice? Why does a colony of ants act like a large, single, intelligent organism, when in fact it is many individual ants interacting in simple ways with their neighbours? But collective things like crowds and water and ant colonies are governed by simple laws which emerge from the chaos of a multitude of interactions: certainty emerges through organization, as Laughlin puts it. These emergent laws of cause and effect depend on the organisation of the components, not on the components themselves. The crucial point he wishes to make is that scientist should end their "carnival of the baubles" and realise that the "ultimate nature" of the universe is irrelevant and may not exist, because what the universe is made of is less important than the fact that order emerges from interactions.

In his book, Laughlin does not present new results which extend our understanding of emergence, but says that deep down the universe can be made of atoms, multidimensional energy strings, or cream cheese and we wouldn't notice the difference. Laughlin claims that simple laws are not the basis of our explanations. Chaos of interactions reigns, but in such a way that simple laws of cause and effect emerge; simple laws are not fundamental. This is hot stuff, but there's more, because he says that the things which are at the bottom of the sundae glass of phenomena are irrelevant. We could go looking for them out of curiosity, but this won't improve our understanding of the universe. This is indeed a reinvention of science.

Well, perhaps. Or perhaps emergence, which certainly extends the range of problems which science can tackle, when applied to the basis of physical laws simply means casting science in a new metaphysical light. When we find the simplest laws, we've either found the basis of the universe, or we've stopped at the lowest level we can reach. Is that a difference which makes any difference? We still need to find those simple laws in order to improve our understanding because we are curious to see what lies beneath the world of our senses. As Laughlin is keen to point out, scientists are people too, driven by curiosity, vanity, ideology, and the rest. Since Laughlin's thesis doesn't require a change in methodology and, as metaphysics when applied to the fundamental nature of the universe, can't be tested anyway, will scientists take any notice of it? And is it possible that one reason for writing this book was for the famously outspoken Laughlin to take a swipe at colleagues who spend their time dreaming of ToEs?

Scientists may ignore the main message of this book, but they should certainly take heed of some of the lessons contained within. Laughlin makes some critical observations about science and the way it is taught. For example, he recalls how his son was familiar with Newton's laws, but could not explain what kind of natural phenomena count as evidence for their truth. The point of the tale is that his son, like the rest of us, was taught that physical laws are "the way the universe is" and so he simply learned them by rote. Laughlin quite reasonably says that anything beautiful, like the simple and elegant laws of nature, is usually brought into the world with great suffering and fighting. In a striking passage he says "The existence of physical law is, in fact, astonishing ... We believe in universal physical law not because it ought to be true but because highly accurate experiments have given us no choice." This explains both his ire at theorists in love with the beauty of their mathematics when the final arbiter is the observation of nature, and with the type of education which fails to teach students to think.

Scientists enjoy making fun of themselves, but don't like it when non-scientists do. Laughlin has the highest accolade in science, a Nobel Prize (Physics, 1998), and so should be safe from his colleagues even though he continually makes fun of what they do and how they do it. Unfortunately, he's letting the book-buying public in on the secret which other scientists might not find so amusing. Still, some of his jokes and observations are very funny, even if not one of the pen-and-ink cartoons is. In fact, the cartoons add nothing to the reader's understanding of the text. One might suspect that they are there simply because the author liked them and the publisher thought it was a bit of a gimmick. He does quite a good fir tree, presumably through practice because his over-used analogy of this "reinvention" of science as some dramatic frontier calls for lots of pictures of people hiking.

Indeed, the personality of the author sometimes shines through the text a little too strongly, which gets in the way of his arguments. It is very nice to read how much he enjoys hiking and going on wine-quaffing river cruises with his scientist friends at taxpayers' expense, but these anecdotes don't always inform the explanation, and sometimes obscure it. I wonder how much of the unarguably good stuff I missed because I was skipping over yet another yarn. And whilst it is a good idea to show that scientists are rounded, interesting people, he falls into the trap he has set for the rest of us by so often portraying scientists as one-dimensionally obsessed by their pet theories. If a scientist doesn't think like him, it seems, then she's obviously blinded by ideology and will never be the guest of honour in Stockholm (but why should she wish to be when, as Laughlin points out, there is "too much reindeer on the
menu"?).

Read this book, because there is a lot of well-argued and deeply-insightful science in it. Laughlin is a radical but brilliant scientist firmly rooted in a tradition of observations of nature guiding the way. The prose is often well-crafted and funny, his explanations vivid. The bibliography and notes section is extensive with many useful references and websites. However, this book may best be treated like a precocious child; important ideas can be teased from it, but the extravagant claims of originality and ridicule of those who came before should be taken with a large pinch of salt. And no ice-cream sundaes for being rude to his friends.

Phil Wilson uses mathematics to understand how the skin of red blood cells works. The people he works with at the University of Tokyo hope that they can use this understanding to invent better ways of delivering medicine to the body. For now, he lives in this Universe.