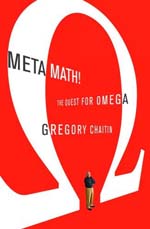 The quest for Omega

The current issue of Plus features the article Omega and why maths has no TOEs by the same author, which describes the maths behind this book in more detail.

If I had to describe this book using just one word, then this word would be "passionate". This may be surprising seeing that we are dealing with maths, or, to be precise, metamaths, the study of mathematical truth. But this book is as much about the author's love for his subject as it is about the maths itself, and this love shines through on every page. Chaitin doesn't just describe his mathematical ideas to you, he also tells you where he was when he had them, how it felt having them, and about the mysterious creative processes that are involved.

Bringing in this human element of maths is not merely a stylistic quirk. The striking conclusion Chaitin draws from his mathematical work is that human creativity is absolutely necessary, and that "intuition cannot be eliminated from mathematics." Chaitin refutes the idea that within mathematics there is a "Theory of everything" (TOE), a finite set of axioms and rules from which you — or even a machine — can derive every mathematical fact without ever having to add a new idea or hypothesis. He uses mathematics to show that mathematics is infinitely complex, and consequently that any finite theory can only ever capture a small part of it. Crucially for mathematicians, this means that there are mathematical statements that defy proof. In fact, Chaitin admits to having believed that Fermat's Last Theorem was one of these unprovable "facts", until it was famously pinned down by Andrew Wiles and colleagues in the mid 1990s.

The fact that there are undecidable statements in mathematics is no news to mathematicians. Kurt Gödel's famous incompleteness theorem established their existence as early as 1931. But Chaitin's approach is completely different from Gödel's, and rather than just providing one undecidable statement spits out an infinity of them.

The main pillar of Chaitin's proof of incompleteness is the number Omega that appears in the title. Omega is defined in a mathematically rigorous way as a probability, just as the number Pi can be rigorously defined as a geometric quantity. But very much unlike Pi, there is no nice little computer program that can compute the value of Omega to any given degree of accuracy. Omega is completely "unknowable". We can define it rigorously, point at it, speak about it, yet it slips away once we try to put our finger on it. Written in binary notation, Omega's expansion is infinitely long, and it is a bit like an infinite snake: no matter how big a bag we try to trap it in, there will always be an infinitely long part of the tail poking out. No mathematical theory is powerful enough to compute the true value of Omega. And this proves, according to Chaitin, that there are severe limitations to what we can actually "know" through mathematical reasoning.

So does this make maths useless? Not according to Chaitin. Mathematical reasoning is still essential both in mathematics and science in general, it's an indispensable guide. And all our established mathematical theorems are no less true or proven. But it means that maths is a little more like physics than mathematicians normally like to think: every now and again, when a maths statement just seems impossible to prove, we should simply accept it as a fact. This is exactly what physicists do when they hit on a formula that describes their observations particularly well: they adopt it as a new law. Moreover, he says, since the maths world is not finite and rigid, but infinite and very complex, we need our intuition and creativity to guide us through it and point us to fruitful approaches. A machine-like approach to maths is just not good enough.

Some of his conclusions are controversial, and Chaitin makes no secret of that. Proof is the holy grail of maths and will remain so for the time being. Mathematicians are not about to defect to the physics camp. But Chaitin gives a well-rounded argument. Although Omega is the star, the book is holistic in nature and Chaitin never loses sight of the big picture. He takes great care to explain the theory Omega emerged from (which by the way is called algorithmic information theory), and puts its philosophy in the context of our digital world — DNA, software and the like — and the ancient tension between the analogue and the digital.

The ideas in this book are quite deep, but its evocative language and examples, metaphors and even poems should make it accessible to non-experts. As in most popular maths book, there are harmless looking pages that can take you quite a while to get through if you're not familiar with the maths, but generally it's possible to skip the really hard bits and still retain the hang of what's going on and capture the main ideas. Chaitin's writing clearly conveys the beauty and elegance of pure maths and — as long as the personal nature of the delivery does not put you off — gives a vivid insight into the mind of a mathematician. If you are interested in the philosophy of pure maths, then this is an exhilarating read.