'Life in the Universe' 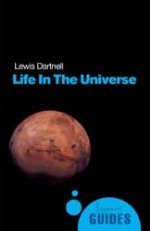 Life in the Universe: a beginner's guide

Given that 14 billion years have elapsed since the birth of the Universe and that the cosmos contains a mind-boggling 1024 stars, can Earth really be the only planet in the entire Universe that supports life?

In his book Life in the Universe Lewis Dartnell attempts to rationalise the possibility of extra-terrestrial life by taking the reader on a fascinating journey from the birth of the Universe, via the origins of life, to alternative homes for alien life forms in our solar system. Life in the Universe is a whistle-stop tour of the field of astrobiology; defined as the study of life and its existence in the Universe. As a research field, astrobiology is still in its infancy and Dartnell has the unenviable task of summarising current thinking in this relatively fragmented, multidisciplinary research area. He has succeeded however, and his book is comprehensively researched, well-structured and extremely readable.

Dartnell introduces the reader to some of the most extreme organisms on Earth — bacteria-like, single-celled organisms that can thrive in boiling hot acid, survive in the absence of sunlight and remain dormant at sub-zero temperatures for thousands, perhaps millions, of years at a time. Dartnell also tackles some fascinating questions about the origins of life, such as "Which came first? Metabolism or DNA?", or whether bacterial stow-aways from other planets could have survived inside meteorites and hitched a lift to Earth.

In addition to introducing the reader to the fundamental biological principles of astrobiology, Dartnell also provides a comprehensive introduction to geophysics, for example how features of our Earth such as its size, the presence of plate tectonics and a strong magnetic field have enabled life to evolve and thrive here. Mathematics lies at the heart of many of the astronomical processes and theories that Dartnell covers in his book. For example, detailed calculations have shown that the Earth lies in the so-called habitable zone in relation to its distance from the sun, creating relatively stable climatic conditions favourable to life. Based on knowledge such as this gained from our own solar system, advanced mathematical simulations suggest about half of other planetary systems in the Universe could harbour an Earth-like planet. Even our position in the Milky Way has influenced life on Earth. Here, mathematics and astronomy tell us that we are just far enough from the centre of the galaxy, with its high density of stars, to avoid any gravitational disturbances that could otherwise direct extinction-grade comets towards Earth.

Life in the Universe is part of the A beginners guide series, and Dartnell has fulfilled his remit in this respect, giving the reader a thorough grounding in topics such as the origins of the solar system and the chemistry of life. No easy task when approaching complex mathematical and biochemical concepts such as redox potentials and entropy, a knowledge of which is a prerequisite for understanding cellular metabolism (the process of energy storage, transfer and use within cells). Here, mathematics underpins our understanding of metabolism and biochemistry, for example, in the processes governing energy transfer in metabolic pathways, and in defining the complex rules that govern how proteins fold up into the complex three-dimensional forms that enable such pathways to function.

My only criticism of this book is the lack of some well-thought-out visuals to help explain some of the more abstract metabolic concepts. This would certainly have helped the reader in their understanding of the biochemistry behind the evolution of the first cells. Overall, however, this concise little book is a fantastic guide to the search for life in the Universe and Dartnell manages to add his own opinions to current thinking in astrobiology in an unbiased and authoritative manner. Indeed, as a molecular biologist myself who has had a fascination with astrobiology for many years, I was pleasantly surprised to discover a veritable treasure trove of facts and theories that I had not come across before. Life in the Universe will certainly suit the more educated reader as well as the complete beginner. It's a great read, and a copy will be appearing in the stockings of my close friends and family this Christmas in an attempt to introduce them to why I think astrobiology is such a fascinating field.

Elena Mills is a medical writer by profession, with a research background in molecular biology and biochemistry. She loves learning about the world around her, and the more molecular it is, the better. When she's not got her head in a science book, she can usually be found either surfing the breaks and beaches of Cornwall, or skiing the mountains of Europe.