'How many socks make a pair?' 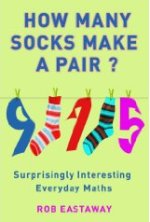 How many socks make a pair? Surprisingly interesting everyday maths

If you were to seek out books that attempt to popularise maths among the innumerati, you would notice that most give a quick nod to the golden ratio. And why not? There's a lot you can do with a chapter on this beautiful ratio: you can chart the history of its discovery and the worthy ancients who sang its praises. You can observe its occurrence in nature and art. You can even tie it into an entire conspiracy theory involving the Vatican, if you are so minded. Or, if you're Rob Eastaway, you can encourage your readers to draw a golden triangle, name the resulting hypothenuse Fred, and explain with courteous precision why much of the mathematics cited in the Da Vinci code is just plain wrong. It's hard not to love an author like that.

Eastaway's philosophy is best summed up by quoting from his own introduction, where he summarises Koestler's definition of creativity as beauty, discovery and humour — or, as later paraphrased by some anonymous wit, "ah, aha! and haha!". This approach is adopted throughout the book. The reader sees the beauty of a mathematical pattern or observation, is led through a stepwise interpretation, and then concludes with an (often humorous) moment of insight.

How many socks make a pair? has twelve chapters, each of which uses an everyday situation to exemplify an aspect of maths. Chapters are short and punchy, and different enough that you're bound to find something in there to get excited about. The chapter I don't believe it explores how phenomena that appear counter-intuitive can be explained by mathematical awareness. The chapter Calculating without a calculator teaches the reader mathematical short-cuts which are primarily useful, but also serve to provide a glimpse of how fascinating numbers, and their apparently coincidental patterns, can be. My personal favourite, What colour was the bear?, takes the reader through a series of logic puzzles with some mathematical component — a kind of a Victorian parlour game riddle that works well and is oddly compulsive reading. Sudoku, gambling and magic squares all make an appearance, while mathematical concepts such as Fibonacci numbers, numerical palindromes and Pascal's triangle are all demonstrated through practical exploration, rather than theoretical treatise. In this respect, the book is relentlessly interactive: Eastaway has his reader walking forwards and backwards in front of a mirror, folding paper napkins and shuffling decks of cards.

The secret of the book's success is in part down to the author's awareness of what it is like not to understand or love maths. As he points out, somewhat disconcertingly, "Listening to a mathematician explain something can provoke private thoughts in the listener like this: 'You know, I think this is supposed to be obvious, but I just don't get it.' Or: 'Right now, the main thought going through my head is - WHO CARES?'" Perhaps as a result of this insight, the book races through several key ideas in mathematics without requiring a single equation or calculation on the part of its reader; all that's needed is a willingness to link commonplace observations to numerical patterns.

So, should you be rushing out to buy this book? It has much to recommend it: a fluent and likeable writing style, a perfect ratio of diagrams to puzzles, and a good spread of topics. It's also a popular mathematics book that's actually about doing maths. For a non-mathematician, Eastaway's book is crucial — for a short book, it would disproportionately enhance the canon of works that lurk around Britain's coffee tables. For someone who can confidently cope with the odd equation, the book is probably not going to tell you anything you don't already know, though you might find your gambling habits improve. It might make you smile, and give you a nostalgic sense of achievement at the first moment the penny dropped on a new concept. What it will definitely do, though, is provide some fantastic insights into how best to describe your own mathematical projects to those struggling. In case that argument is not convincing, here's an experimental problem from How many socks make a pair?:

A woman is 21 years older than her son. In six years time, she will be five times as old as her son. Where is the father?

Enjoy working it out ... and if you can't, I recommend you buy the book.