Hello, and welcome to the first issue of PASS Maths for 1999!

Since issue 6 was released in September 1998, there has been a change behind the scenes at PASS Maths. The hardworking crew who brought you the first six issues (Steve Lay, Maura Bourdon, Hugo Moule and Robert Harding) have now moved on to fresh fields, and starting with issue 7 PASS Maths has acquired a whole new editorial team. We'd like to take this opportunity to wish Steve, Maura, Hugo and Robert all the best, and to introduce ourselves and talk about our future plans for PASS Maths. 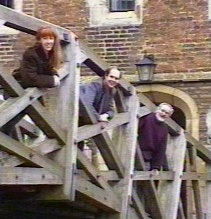 The new team consists of the Editor of PASS Maths, Dr. Robert Hunt, and co-Editors Kona Macphee and Mike Pearson. Here we all are on the famous Mathematical Bridge at Queen's College, Cambridge.

In a new development for PASS Maths, we're all part of the Millennium Maths Project. The MMP is launching in July, and will be the umbrella organisation for PASS Maths and its sister site, the NRICH Project. We hope to have yet closer ties with NRICH in the future.

We're planning to move to a "rolling" news service, where news items or announcements of interest appear on the site as soon as they arise. To this end, we've added a new Stop Press! section, where you'll be able to find all the latest news.

Dr. Robert Hunt is a Lecturer in the Department of Applied Mathematics and Theoretical Physics at the University of Cambridge, and is a Fellow at Christ's College.

I studied mathematics at Trinity College, Cambridge as both an undergraduate and for my PhD, before a short stint as a Lecturer at St Catherine's College, Oxford. I recently returned to Cambridge and am now a fellow at Christ's College, where I am Director of Studies in Applied Mathematics.

As well as being a member of the Millennium Mathematics Project team and Editor-in-Chief of PASS Maths, I direct the computational course work component of the Mathematics Tripos (the Cambridge University degree course). My research interests are in Fluid Dynamics (Wave Theory and Wakes) and Special Functions.

Outside academia my hobbies include music (piano playing and singing) and theatre (both from the audience and on stage, particularly in musicals), and I have been known to indulge in Scottish Country Dancing and Ballroom and Latin Dancing.

Kona Macphee is a part-time Computer Officer with the PASS Maths project.

I'm living proof that career paths aren't necessarily linear! Before taking my undergraduate degrees in Digital Systems and Computer Science at Monash University, Melbourne, I spent three years in Sydney, where I studied musical composition at the Sydney Conservatorium of Music, violin at the University of Sydney's Department Of Music, and spent six months as an apprentice motorbike mechanic.

I've also had lots of casual jobs, including waitressing, restaurant cashiering and supervising, working in a stationery and drafting supplies shop, and doing clerical work for the Australian Bureau of Statistics.

After finishing my Honours year in Computer Science, I spent almost a year as a research assistant in the Computer Science and Earth Sciences Departments at Monash before coming to the Cambridge University Computer Laboratory as a graduate student.

When I'm not working on PASS Maths or my thesis, I play the violin with various Cambridge musical groups and work on my own writing projects.

Mike Pearson is a full-time Computer Officer with the NRICH & PASS Maths projects.

I was maths teacher a long time ago, but now attempt to educate machines. You can also blame me for any bad taste cartoons that may make their way onto this site (or indeed the NRICH site).

I have worked in the computer and software industry for 20 years, mostly in software development but with a bias towards industrial control, networks and communications. There's a rather out of date web page on the last project I worked on here. From 1986 till recently, I was working from home. This was an interesting mixture of hi-tech, goat keeping, ferret rearing, parrot mending, and wood carving. Oh, and child rearing...

One of the benefits of this experience is that I now know how to shear a sheep the hard way!