You may have seen Foucault's pendulum. There's one in the Science Museum in London (part of the National Museum of Science and Industry), and there are many more in various locations around the UK (for instance, in Glasgow) and the world (including one at the United Nations Headquarters and a famous example at Le Panthéon in Paris). 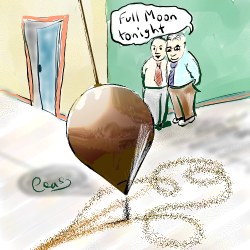 A Foucault pendulum is just like any other pendulum, nothing more than a weight attached to a wire; but to work well it needs to have a very long wire, with a really heavy weight. They're often attached to the ceilings inside very tall buildings, such as museums and cathedrals, so that they can hang a great distance and swing impressively slowly. These sorts of locations also tend to have fairly constant temperatures, which avoids expansion and contraction of the pendulum which would cause complicated variations in its period.

What makes a Foucault pendulum different from a normal pendulum is that it is attached at the top to a universal joint which allows the pendulum to rotate freely around its fixing point as it swings. Once you set one in motion, its direction of swing will rotate at a rate of about 0.2 degrees every minute. But in fact, it isn't really the pendulum that's rotating: the pendulum is swinging back and forth in exactly the same direction. It's the Earth which is rotating underneath the pendulum, which makes it appear that the pendulum is in fact changing direction.

At the North Pole, the pendulum would appear to rotate through a whole 360 degrees once a day, because the Earth rotates all the way round underneath it. Here in the UK, because we are at a lower latitude, the rate of rotation is lower, at around 280 degrees per day. (At the equator, a Foucault pendulum wouldn't rotate at all.)

Jean Bernard Leon Foucault (not to be confused with Michel Foucault, the 20th century philosopher) first demonstrated his pendulum during the very first World Fair, held in London in 1851. He went on to invent the gyroscope the following year. 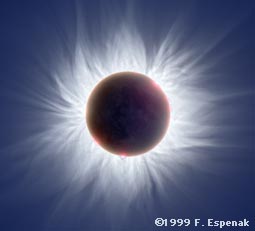 A superb image of the sun's corona, captured during the 1999 total eclipse.
Copyright 1999 by Fred Espenak

The rate of rotation of Foucault's pendulum is pretty constant at any particular location, but in 1954, during an experiment with one, a physicist named Maurice Allais got a surprise. His experiment lasted for 30 days, and one of those days happened to be the day of a total solar eclipse. Instead of rotating at the usual rate, as it did for the other 29 days, his pendulum turned through an angle of 13.5 degrees within the space of just 14 minutes. This was particularly surprising as the experiment was conducted indoors, away from the sunlight, so there should have been no way the eclipse could affect it! But in 1959, when there was another eclipse, Allais saw exactly the same effect.

Many people have questioned his results: why should the eclipse affect a pendulum indoors in any way? Many subsequent experiments have taken place since, with mixed results: some experimenters have found no measurable effect, but slightly more have confirmed the result from several different locations, including an underground laboratory.

During this year's eclipse in August, NASA and other groups attempted a range of experiments to finally confirm or deny the result. Their conclusions are still awaited, though at PASS Maths we have already heard that one laboratory in Austria replicated the effect. If it is shown that the effect really is a true one, and not the result of widespread experimental errors, then the search will be on for an explanation.

At the moment it is a true mystery: nobody has any real idea what the cause might be. Some suggestions have included gravitational waves, solar radiation, and the anisotropy of space (the fact that space is different in different directions). All of these physical phenomena are governed by highly complex mathematical models, and unravelling the mystery will take the combined efforts of mathematicians, physicists and astronomers the world over!

Foucault's Pendulum
The Smithsonian Institute's Foucault Pendulum page.
Decrypting the Eclipse
NASA's story - A Solar Eclipse, Global Measurements and a Mystery.
Mr. Eclipse
Fred Espenak's report from Turkey on the 1999 solar eclipse.
NMSI
National Museum of Science and Technology.
Maurice Allais
The Memorial Prize in Economic Sciences 1988, with a link to his autobiography.

Permalink Submitted by DJWaust on September 23, 2017

Maurice Allais invented the paraconical pendulum around 1950, this, not a Foucault pendulum, is what is used in these eclipse experiments. From your own link a quote from his autobiography "On the experimental level, and as a by-product of this theoretical research, I conducted, from 1952 to 1960, experiments on the anomalies of the paraconical pendulum (a short pendulum, about one meter long, suspended by a steel ball), anomalies the existence of which I proved. For these experiments I received the 1959 Galabert Prize of the French Astronautical Society, and I was laureate in 1959 of the United States Gravity Research Foundation."
As you can see not a Foucault pendulum which you correctly described as "....to work well it needs to have a very long wire".