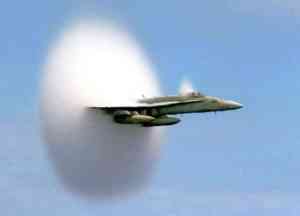 A plane breaking the sound barrier. Image courtesy of NASA

This year's Abel prize goes to the Hungarian-born mathematician Peter D. Lax, just in time for his 79th birthday. Lax, who did most of his research at the Courant Institute at New York University, received this honour for his work on one of the most indispensible objects in mathematical physics - the differential equation.

The reason differential equations are so important in describing the natural world is that they express relationships between quantities that vary continuously. Take a travelling car, for example. The distance the car covers from the start of its journey can be written down as a function of time. The speed of the car at a given moment is described by the relationship between the change in the distance travelled and the time the journey takes. In fact it is given by the derivative of the distance function.

If you know the speed function and want to work out the distance function, you have to solve a differential equation, that is, to find a function when all you know about it is its derivative.

The most fundamental phenomena of nature, such as gravitation, relativity and the motion of gases and fluids are described by differential equations. Writing down these equations is one thing, but solving them is an entirely different matter. Generally, solutions cannot even be written down as a formula. Even after studying deep and complicated mathematical structures, mathematicians still often have to be satisfied with approximate solutions.

The theory of differential equations lies at the very heart of the overlap between applied and pure mathematics, and Peter Lax's results have been ground-breaking in both areas. They have spawned a wide range of advances in engineering and technology, for example in weather prediction, the design of air planes and in high-speed communication technology.

According to the Professor Helge Holden, who has written an article describing Lax's prizewinning work, the secret of Lax's success lies in the combination of "a deep understanding of analysis with an extraordinary capacity to find unifying concepts". An example can be found in Lax's work on solitons. These are solutions to the equations governing solitary waves, such as those emanating from the bow of a boat when it comes to a halt. Lax identified exactly what it is that makes these equations work - a pair of mathematical objects known as the Lax pair, which remains unchanged with time. His ideas could be applied to a host of other systems, and important classical equations, such as the non-linear Schrödinger equation, became solvable almost overnight.

Another important phenomenon that can be modelled by differential equations is the shock wave. This occurs when there is an explosion or when a plane crashes through the sound barrier, but also in much less dramatic situations, for example in heavy traffic. Shock waves come about when there is a rapid transition of density or pressure within a system. The kind of systems in which shock waves occur are those in which a quantity, such as mass, temperature or number of cars on the road, is preserved. These systems are called "hyperbolic conservation laws". Lax not only developed schemes to solve these laws numerically, but developed a simple rule to determine which of a number of theoretical solutions is the physically correct one. Here, as in much of his other work, Lax's insight was so deep that scientists were able to borrow his ideas and apply them in other contexts.

As well as contributing a great number of other results to the theory of differential equations, Lax laid some of the foundations of computational mathematics. Influenced by the legendary John von Neumann, he realised early on the important role that high-speed computers would have to play in mathematics. His pioneering work on the US National Science Board in the 1980s resulted in a substantial increase in government funding of research into this area.

Lax's achievements have been honoured in the past by a host of other prizes and awards, but the Abel prize is bound to be the perfect icing on his birthday cake. Congratulations!