Maths can mean more to business than just keeping the books and forecasting sales. Unknown to many business people, and even some mathematicians, there is a huge range of applications of mathematics that that could make the difference in business success and lead to new innovations. The Knowledge Transfer Network (KTN) for Industrial Mathematics was launched earlier this year to bring together the UK business and mathematical communities and obtain real benefits from applying mathematical thinking to business problems.

"The aim of the network is to give business access to the mathematical knowledge and expertise they need to boost innovation," says Robert Leese, the director of the Smith Institute which manages the KTN. Leese says that maths is becoming more and more integrated into business. "The economy is moving toward the service industry — distribution, logistics — and these are all mathematics." And maths is becoming vital for businesses to manage and extract information from their ever increasing volumes of data. 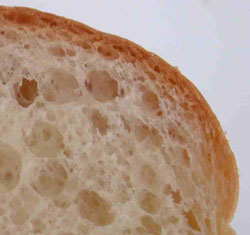 The crust on bread can be characterised
by the increased density towards the surface.

The KTN actively seeks industrial problems to tackle and offers companies several ways to access mathematical expertise. Some of the KTN projects might involve long-term research to solve a given problem. An example is the research done into how the crust of bread forms when it is baked, a collaboration between RHM Technology, Heriot-Watt University and the University of Greenwich. Dan Jefferson and his colleagues developed mathematical models of how the liquid dough and it's gas content evolve during baking, and how the nature of the bread crust could be controlled by temperature.

But the KTN can also offer businesses more immediate solutions. "The most dramatic impact is when we take live problems that companies want solved now — not next month or next year," says Leese. Businesses can present problems to week-long study groups of mathematicians and get answers very quickly. A study group last year was presented with a problem by BAE Systems concerning secure wireless networks in shared office buildings. As wireless networks become more common, there is a growing issue of leakage of electronic information between businesses sharing buildings due to the long-range nature of these networks. BAE have developed a technology called "stealthy wallpaper" that can block particular frequency ranges from passing through the treated walls, floor or ceiling. By assigning companies different frequencies for their wireless networks, the stealthy wallpaper can be tuned to stop that frequency from leaving that particular company's space in the building, thus keeping their electronic information secure. The question BAE asked the study group was: what is the maximum number of frequencies necessary to ensure the building is secure? 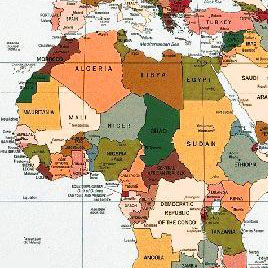 The problem of assigning frequencies in a
single level office building is analogous to
colouring a map so that no neighbouring countries are of the same colour.

Mathematically this problem is just like colouring a 3D graph, where each node on the graph represents a company in the building, and two nodes are joined if they share an area of wall, ceiling or floor. In this context BAE's question becomes: what is the number of colours necessary to colour the nodes of the graph such that no node is joined to another of the same colour? For simple building layouts the study group were able to obtain upper limits for the number of frequencies required and provide algorithms that would produce a good colouring quickly. For example, if the office building is all on one level the problem is the same as colouring the countries on a map, and the four-colour theorem implies that the maximum number of frequencies required is four.

Even though the study group could not provide BAE with a maximum number of frequencies that would ensure every possible building layout was secure, their mathematical analysis of the problem revealed several design rules that would normally keep the number of frequencies to 12 or less. "We did find non-trivial upper bounds for a number of simplified cases which, although rare in real life, give an insight into practical steps which a building planner could take in order to arrange a building in a security conscious manner," the study group said in their report. "While not answering the more esoteric and mathematical questions posed in the initial proposal, we were able to develop a practical method for finding solutions to real problems. As such, we hope that this report will prove useful to BAE Systems."

The KTN works with about 25 university mathematics departments, but they go to "wherever the expertise is". Leese says that the industrial mathematics community in the UK is very diverse, ranging from academics who are motivated by industrial topics to those who may not be interested, or even aware, of how their work will help businesses and other disciplines. "Problems that industries have don't respect traditional mathematical boundaries," Leese says. So the KTN also encourages mathematicians to realise that their work can be extremely relevant to industrial problems.

"The KTN is an opportunity to raise the profile of mathematics at the highest levels of government and business," Leese says. He and his colleagues are already demonstrating to business and government the vital insight mathematics can bring to industry. Companies already involved with the KTN include Unilever, Ofcom, BAE systems and Vodafone. The business community may be ready for mathematics to become an integrated part of industry, however is the UK mathematics community ready?

"Once industry realises the potential of mathematics there is a question of whether the supply of maths expertise can cope with the demand," says Leese. But this business demand for experts and mathematically literate graduates may be the boost UK mathematics needs, driving more people to study and work in the subject. And Leese hopes that business will recognise it has vested interests in seeing the maths community thrive: "It would be exciting if companies changed their behaviour in response to mathematics, and increased their investment in maths."