It seems that string theory, so far the strongest contender for a physical "theory of everything", may soon be put to the test for the first time. Two separate teams of physicists have just published work describing how to compare the theory's predictions with reality. The results of the experiments they propose could go as far as ruling out string theory completely.

String theory grew out of the need to unify the two dominant descriptions of the physical world: Einstein's theory of general relativity, which describes the world at a large scale, and quantum mechanics, which applies to the sub-atomic level. Although both theories predict the behaviour of physical systems admirably well at their respective scales, they squarely contradict each other. Finding a grand unifying theory has become the holy grail of theoretical physics.

String theory is one of the most complete attempt at a theory of everything. Traditionally, fundamental particles like electrons were thought of as points, mathematical entities of zero dimension. In any attempt to unify quantum mechanics and relativity, however, the assumption that particles are point-like causes unsurmountable mathematical problems. String theory pioneers found that the problems go away when you replace point-like particles by string-like ones. According to string theory — or rather string theories as there are various versions — these tiny vibrating strings form the basic building blocks of the world we live in. They are so small that, as far as our macroscopic view is concerned, we can still treat them as points, so large-scale physics still applies. At a small scale though, the strings smooth out the difficulties that were encountered by points. 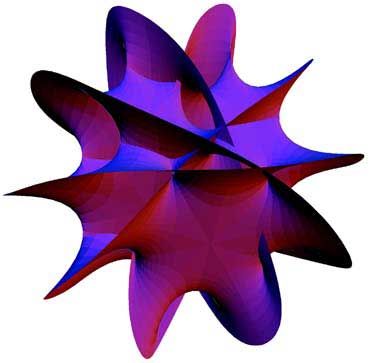 This image shows a 2-dimensional subspace of a 6-dimensional object, the Calabi-Yau quintic, a prime candidate for the hidden dimensions of string theory because of its simplicity and elegance. Even this shape is constructed in 4 dimensions, and has been projected down to 3 dimensions for display. Image courtesy Andrew J. Hanson, Indiana University.

Proponents of string theory like it because of its elegance and mathematical coherence, describing the fundamental particles and forces in one common mathematical language. Opponents, though, complain that so far, no-one has been able to come up with a way of testing string theory against reality. Some even suggest that it does not deserve to be called a scientific theory, since it is not falsifiable: no-one has been able to pin-point a phenomenon that, if observed, would prove that string theory is false, in the same way as observing a ghost would prove false any theory that denies their existence.

But now this may be about to change. One of the teams that have announced a potential test of string theory are based at the University of Wisconsin-Madison. Their idea was to home in on one of its more surprising aspects: that space is not made up of the usual three, but of ten dimensions. According to the theory, the extra six dimensions are curled up into tiny, hidden geometrical shapes. The theory does not, however, predict the exact geometrical shape of these dimensions, a whole range of geometries is theoretically possible.

Gary Shiu, who led the recent study, and his colleagues conjectured that although the extra dimensions are invisible to us today, they must have influenced the cosmic energy that was released right at the beginning of the Universe, during the Big Bang. Satellites like NASA's COBE (Cosmic Background Explorer) and WMAP (Wilkinson Microwave Anisotropy Probe) have become increasingly good at at capturing information about this radiation. In fact, a map of the cosmic microwave background, the left-over radiation of the Big Bang, which was produced from the COBE data, won its creators the 2006 Nobel prize for physics.

What Shiu and his colleagues wanted to know was if and how the traces of the extra dimensions and their geometry would show up on such a map. To find out, they started with two very simple but different models for the dimensions' geometry. For each they calculated what a map of the early universe would look like, if the model was true. The two maps they came up with showed up small but significant differences, proving that the dimensions do indeed leave a fingerprint on the make-up of the early universe and that this fingerprint can give us information about their geometry. Current maps, like the one produced by COBE, are not yet precise enough to show up this information, but future projects like the European Space Agency's Planck satellite most likely will, and then the extra dimension aspect of string theory can be put to the test.

In a separate development, a team of physicists from Carnegie Mellon University, the University of California and the University of Texas did not look to the sky to test string theory, but went underground. Later this year the European Laboratory for Particle Physics, also known as CERN, will switch on its Large Hadron Collider (LHC), an immense particle accelerator near Geneva that sits 100m below ground. The accelerator will be able to collide fundamental particles at speeds close to that of light. 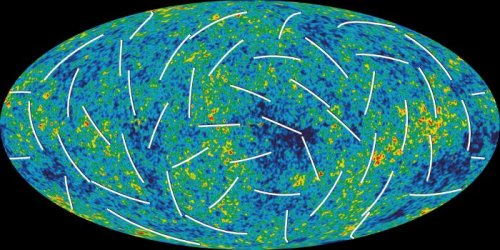 In particular, LHC researchers will be able to observe for the first time how particles called W bosons scatter when high-energy collisions occur. The maths that underlies string theory predicts what this scattering should look like, so LHC will enable researchers to compare the predictions to reality. "The beauty of our test is the simplicity of its assumptions," explains Benjamin Grinstein of the University of California and one of the authors of the study. "The canonical forms of string theory include three mathematical assumptions — Lorentz invariance (the laws of physics are the same for all uniformly moving observers), analyticity (a smoothness criteria for the scattering of high-energy particles after a collision) and unitarity (all probabilities always add up to one). Our test sets bounds on these assumptions.

"If the test does not find what the theory predicts about W boson scattering," he added, "it would be evidence that one of string theory's key mathematical assumptions is violated. In other words, string theory — as articulated in its current form — would be proven impossible."

Neither of the two new tests will be capable of verifying string theory once and for all. If the results concur with its predictions, then this is just some further evidence for its correctness, not absolute proof. But the tests' ability to falsify string theory, or at least certain aspects of it, means that a philosophical barrier has been overcome.