One advantage of the UK voting system is that nobody could possibly fail to understand how it works. Everybody has one vote, in every constituency the candidate with most votes wins, and the party that wins the majority of constituencies goes on to form the government. Simple.

However, the disadvantages are well-known. Dividing the electorate up into constituencies means that the party in government doesn't necessarily have the largest share of the vote. The first-past-the-post system turns the election into a two-horse — or at most a three-horse — race, which leaves swathes of the population un-represented, forces tactical voting, and turns election campaigns into mud-slinging contests.

There are many alternative voting systems, but is there a perfect one? The answer, in a mathematical sense, is no. To see why, let's remind ourselves of what an election is actually trying to do. There is a population of voters, each of whom, if pressed hard enough, can come up with a preference ranking of the candidates: whom they like most, whom they like least, and everything in between, with some candidates possibly occupying equal position. Ideally, a voting system should take these millions of preference rankings as input, and return a single ranking of candidates that makes reasonable democratic sense. The government can then be formed on the basis of this single ranking. 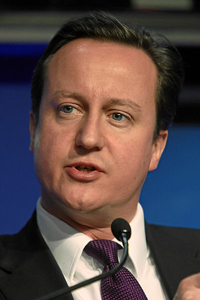 Will you vote for him? Image: World Economic Forum

In the 1950s the economist Kenneth Arrow asked himself whether there can be a voting system which satisfies these pretty minimal criteria. He added one slightly more subtle condition: in the final result, whether one candidate is ranked above another, say Gordon Brown above David Cameron, should only depend on how individual voters ranked Brown compared to Cameron. It shouldn't depend on how they ranked either of the two compared to a third candidate, for example Nick Clegg.

For example, suppose that Brown has just won the election, having come top of the final ranking, when Clegg becomes embroiled in a scandal, which sees him slide to the bottom of all voters' preference rankings. Then this should not have any effect on the fact that Brown was more popular than Cameron: a re-run of the election should still return Brown as the winner, as long as voters didn't change their relative rankings of Brown and Cameron. Arrow called this condition independence of irrelevant alternatives. In our example, poor Clegg has become irrelevant, but this shouldn't effect the contest between Brown and Cameron. Independence of irrelevant alternatives is an important condition because non-compliance of a voting system means that the ranking of outside candidates can have an effect on the outcome. 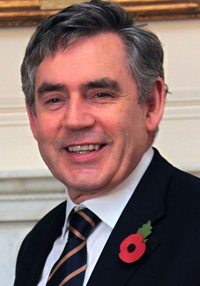 Or do you prefer him? Image: Pazok.

To see why, suppose that in a direct election with four candidates (Brown, Cameron, Clegg, and Xwoman) voters' preferences split into four groups:

Then Brown (41%) wins over Cameron (39%), with Clegg coming third (17%), and Xwoman last (3%). Now suppose Xwoman does something terrible and slides to the bottom of all voters' rankings. We get the groups:

Then Cameron (42%) wins over Brown (41%) with Clegg coming third (17%), and Xwoman last (0%). So even though no voter has changed his or her relative preference of Brown versus Cameron (58% still prefer Brown to Cameron) Cameron has beaten Brown to the top spot.

An alternative to first-past-the-post which does satisfy independence of irrelevant alternative is to have candidates battle it out in pair-wise contests. In a three candidate election with Brown, Cameron and Clegg, you first pit Brown against Cameron: if there are more voters preferring Brown to Cameron than Cameron to Brown, then Brown is ranked first, and vice versa. Then you pit Cameron against Clegg to find the relative ranking of these two, and finally you pit Clegg against Brown. This is arguably more democratic than first-past-the-post, as any winner would be preferred to the other candidates by a majority of the electorate.

Then the Brown-Cameron battle is won by Brown (67% of the electorate prefer him to Cameron) and the Cameron-Clegg battle is won by Cameron (67% prefer him to Clegg), so the ranking should be [Brown, Cameron, Clegg]. However, the Brown-Clegg battle is won by Clegg (66% prefer him to Brown), so Clegg should really come above Brown. What we have here is called a Condorcet cycle: Brown beats Cameron, Cameron beats Clegg, but Clegg beats Brown. There is no way of coming up with a definite ranking, and a majority of the electorate will be unhappy no matter who is chosen as winner, because they preferred someone else. This system violates our third condition of universality. 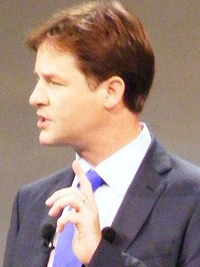 Or maybe him? Image: David Spender.

Marianne writes that "Differently sized constituencies mean that the party in government doesn't necessarily have the largest share of the vote." In fact, you could still get the problem even if the constituencies were all the same size. For example, if Cameron wins by large majorities in 49% of the seats and Brown scrapes in in 51% of the seats, then Brown will win the election but Cameron will have the larger share of the vote.

Marianne, Thanks for the explanation. This helps. Maybe we should'nt vote for people anymore, but for the goals we want them to strive for. Parafrasing your sentence, in would sound like this: Ideally, a voting system should take these millions of preference rankings as input, and return a single ranking of targets that makes reasonable democratic sense. Then candidates could come up with their proposals to serve this the best they can. Like a business plan... The best offer wins.

More significant, there are voting systems that ask voters to rate candidates, not rank them, and thereby escape the consequences of Arrow's theorem. These include approval voting, of which I am an advocate, that ask voters simply to approve or not approve of candidates. But range or score voting, and a new system proposed by Balinski and Laraki, majority judgment voting, allow finer ratings, differing on whether they elect the candidate with the highest mean or median rating. Note that ratings are not equivalent to rankings--for example, a voter can rate all except one candidate tops--so Arrow's framework that assumes preference rankings is not applicable to such systems.

Beginning in the 1980s, approval voting was adopted by a number of science and engineering societies in multicandidate elections (i.e., with more than two candidates). Pleasingly, it almost always elects a consensus choice, who is generally a Condorcet winner (a candidate who can beat all other candidates in pairwise contests).

Steven, thanks for that! We've corrected the date and also included a link to the Plus article on approval voting.

Look across the Irish sea for a much more satisfactory parliamentary solution.

vote for president vs parliament

I think this whole article about FPTP vs AV is more relevant for the choice of a president, less so for a parliament. For parliaments there is the possibility of proportional representation, either straightforward, or in one of its more complicated variants, combining it with constituencies in some way (e.g. germany).

Another interesting variant would be to allow the candidates with the least votes to decide themselves how they redistribute the votes they got to other candidates. The method they use could be one of their election pledges, one that should be easy to keep, once they acknowledge defeat.

In principle, the american presidential election would allow something like this, partially, as any candidate without a majority in the electoral college might request his electors to vote for another candidate.

Why not just pop everyones name in to a hat and pick out MP's at random. Make it a little more interesting choose (randomly) an MP for every county and every City. That way there should be more of a real sample of the populase. What we have by voting is 'in general', male, white, middle aged with a law degree and mostly (mediocre conceited sicophants*). Unless you believe Mrs. Smith of Arcacia Ave, Sheffield is a lesser person than say D. Cameron.