The serious mathematics of cereal, socialising and starlings

What have muesli, social networking sites and flocks of birds got to do with mathematics? Scientists and students from the University of Bath will be explaining all at the Royal Society's prestigious Summer Science Exhibition, which opens today. 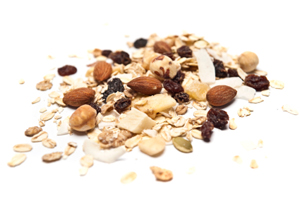 The maths of muesli.

Their exhibit, called Living in a complex world, will show how complex and unexpected patterns of events emerge out of simple interactions, demonstrating how mathematics lies behind the complexity of our everyday world. The University of Bath exhibit is one of the 27 specially selected by the Royal Society to showcase contemporary scientific ideas in the exhibition, which runs from 25 June to 4 July in the Royal Festival Hall, London.

Bath's exhibit is organised by a team led by mathematician and Plus author Chris Budd along with colleagues from the University's Departments of Mathematical Sciences and Mechanical and Electrical Engineering.

Professor Budd said: "We use mathematics to describe many complex systems that occur in everyday life and then make predictions about what will happen. However, the predictions often take us by surprise; our hands-on exhibit brings this element of surprise to the audience. Mathematics takes you well beyond your imagination — sometimes you intuitively expect one thing but in reality the opposite happens. Sorting out these ideas leads us to make discoveries of effects which have many important applications in real life. These can vary from weather forecasting to space exploration, and from power distribution grids to food processing."

"For example, your intuition might tell you that when you shake a packet of muesli, the large things like the raisins and nuts would sink to the bottom. But when you try it, the interactions of the small and the large particles means that the large ones actually rise to the top. Often this gets called the Brazil Nut effect. Maths can predict how granular mixtures like muesli mix up or separate out — this is extremely important in the food industry where ingredients need to be evenly mixed. It also explains why the largest stones come to the surface when you're digging your garden."

One of the team members, Dr Jonathan Dawes (a Royal Society Research Fellow) added: "Our exhibit also looks at how crowds, flocks of starlings and shoals of fish behave. Remarkably, the interactions between people, birds or fish make the flock or crowd behave almost like a single organism. In the exhibit we compare film of flocks and shoals with mathematical models that simulate them. Mathematics helps us prove when flocks form and shows how they stay together. Similar models help to predict the behaviour of crowds and these models help us in designing airports, football stadiums and other places where the safety of large numbers of people relies on understanding how crowds behave in emergencies. So mathematics can save lives because by predicting how crowds will behave in an emergency we know where to place fire exits so that people can escape the building as quickly as possible."

Another part of the exhibit looks at interactions that build up networks, ranging from social networking sites which link people together via common friendships, to the national grid, which needs to link to every home in the UK and balance out the distribution of energy.

Professor Budd explained: "On average there's a path of only six friendships between any one of us and any other person in the world. Mathematics helps us explain why it's such a tremendously small world — and that's also a really useful fact when you're meeting new people at a party. One research topic that we're fascinated by at Bath is how to understand different kinds of networks. Interactions between people help us model how swine flu or STDs can spread. This information helps us to predict epidemics and give advice to health care professionals and policy makers on how to contain them."

"Our overall message is that mathematics is far more than just the subject you did at school - it helps us to understand the complex world around us, and is being used to solve a huge number of important problems. Our ability to tackle big questions such as climate change and population growth in the changing world of the 21st century will depend on mathematical ideas — this event will get people to engage with science and mathematics in ways they didn't even realise were possible before."

This year's Summer Science Exhibition is bigger than ever and celebrates the 350th anniversary of the Royal Society. Find out how Plus is involved in revealing the maths inside some of the other exhibits.

Read more about...
public understanding of mathematics
Tweets by plusmathsorg